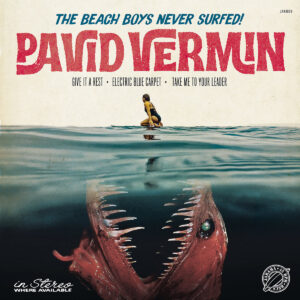 With the year in its death throes and waiting to drag itself with uncertainty into 2021, most would consider three releases within nine months more than enough and go into hibernation. Pavid Vermin had other ideas.  There was every chance that Glenn could’ve reached burnout by the end of the year. At the very least, ‘The Beach Boys Never Surfed’ might have sounded like obvious leftovers from the two self penned Pavid Vermin full lengths. As it is, the best bits of this EP are an equal to everything the “band” has given the world to date, ending a somewhat tricky year in style.

The title track is actually a lot fuzzier than anything from ‘Cutting Corners’. A garage rock/power pop hybrid is injected with a punky speed for an energetic send off. Beneath the fuzz, of course, you’ll find plenty of Robinson’s typical melodicism and the chorus is particularly catchy. It’s almost as if Pavid Vermin don’t want you to spot that straight off though, since between a heavy riff on loan from the first Weezer LP, a brief bubblegum interlude and a hint of surfing goodness, there’s so much more to catch the ear on that all-important first listen. Whatever your punky/power poppish preference, there’s something to entertain within these first two minutes.

Injecting much more speed, ‘Give It A Rest’ falls back on Pavid Vermin’s stock punky sounds as Robinson delivers a high octane banger that takes the guts of at least three classic Lookout! bands, adds a touch of Dave Parasite influenced guitar work and a repetitious hook to create something you feel you’ve known forever. ‘Electric Blue Car’ reinstates the fuzzy guitars, applies distortion to the vocal and absolutely attacks the listener at breakneck speed. A tune where the aggressive riffs outweigh any obvious vocal hooks, this will instantly appeal to listeners who loved it when Green Day took an unexpectedly angry turn on their ‘Nimrod’ LP with tracks like ‘Take Back’ and ‘Platypus’, or those who still feel that Screeching Weasel’s ‘Television City Dream’ rates among the finest punk discs of the 90s. Robinson’s voice, although subjected to various tricks, still shows off a natural gift for a sneering melody throughout, but better still, his guitar work is direct and punchy enough to give everything a genuinely impressive impact.

Best of all – and ideal or those looking for more bounce to the ounce – ‘Take Me To Your Leader’ kicks off with a very buoyant riff, blending classic pop punk with old time power power pop to great effect. During the verses, it sounds a little like Pavid Vermin on autopilot, but Robinson brings out the big guns on a superb chorus where a hook of “Come on, come on” harks back to 70s bubblegum and a full compliment of handclaps and tinkling bells accentuates a timeless melody. Although the jagged guitar work and vocal instantly gives this away as a Glenn Robinson work, there’s something within its good natured heart that would also suit the Kurt Baker Combo. It might have taken a while for it to reach the world at large, but this is the best track in the Vermin canon to date – and one of the best power pop tracks of 2020.

If you’ve enjoyed any of the previous Pavid Vermin releases, you’ll certainly want this as a collection filler…and if you haven’t yet heard this DIY band project and love 90s style pop punk, the best advice is to make a beeline straight for ‘Take Me To Your Leader’ – it’s genuinely brilliant – and then work your way backwards through the rest of this EP. You won’t be disappointed.