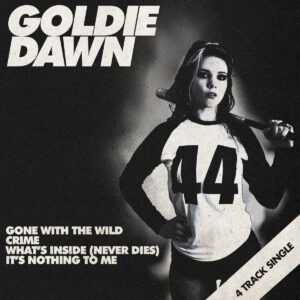 The appeal in Goldie Dawn’s retro noise comes through within about four bars of the opening track. Once ‘Gone With The Wild’ shifts past its crashy intro and intro the main body of the song, the full throttle rock ‘n’ roll riffs grab the listener and refuse to let go. The drums and guitars absolutely blast and the way the band injects a small amount of glam rock swagger into the timeless garage based noise really broadens the appeal. Vocally, Kate Rambo channels the younger Donna A throughout – her slightly brattish delivery will make comparisons to The Donnas inevitable, even if Goldie’s love for much older 70s garage rock comes through loud and clear throughout – and the combination of her sneering tones and the overdriven guitar sound makes this an instant classic. In just three minutes, this band have resurrected Johnny Thunders, New York Dolls, The Damned and championed the “spirit of ’77” far more effectively than most. If this appeals to you, chances are – at least for a time – Goldie Dawn could become your new favourite band.

With a dirtier sound and even more attitude, ‘Crimes’ kicks off with a burst of feedback and a repetitive riff sounding like something being wound, before dropping into a fuzzed up, chugging riff that fuses the lo-fi elements of early Damned singles with more proto-punk rock sounds. The bass is dirty; the guitars pleasingly distorted…and Rambo sings up a storm via lyrics suggesting we should “be the beast, be the burden / Be the idol we all should worship” before hitting upon an almost anthemic shout of “smash it up, break it up, be alive!” The whole thing sounds like a proto-punk call to arms: raw and thrilling, but also oddly authentic considering the recording was made almost four and a half decades after such sounds were first in vogue. …And then the band cranks up the energetic edges even further by shoe-horning in a busy and slightly atonal sax break to finish, very clearly tipping the hat to X-Ray Spex. Brilliant!

Better than both of those, ‘What’s Inside Never Dies’ applies extra speed and some rock ‘n’ roll cool to create something that sounds like a hybrid of New York Dolls, The Donnas and a couple of old Damned singles. With a barrage of handclaps, a furious lead guitar firmly embracing a retro sound and a relentless vocal, this number captures Goldie’s reckless stance in a near-perfect two and a half minutes. After three absolutely blinding tracks, things take a drastic left turn and ‘It’s Nothing To Me’ applies the grubby garage rock delivery to an old country song, with lolloping rhythms and slurred vocals to suit. It’s very clearly a homage to something, but whatever it is, it doesn’t really make it any easier to listen to. While this is certainly of the “acquired taste” variety, it doesn’t damage the overall quality of the EP too much, given that the rest of the material is pretty much perfect.

Looking for something to fill the gap left by the much missed Donnas? Look no further – this is ace. Between a faultless sound, a few great songs and a truckload of energy, it’s got a bit of everything such a release needs…and then some. At its best, this debut should be considered essential listening.