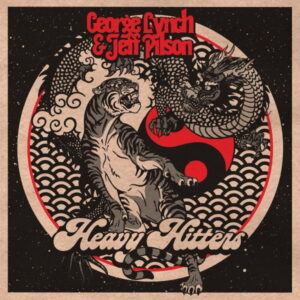 Sometimes, though, the artists “own image” isn’t always the most suitable for the job in hand. Such is the case with at least a third of ‘Heavy Hitters’, where ex-Dokken men George Lynch and Jeff Pilson aim to “turn pop music classics into metal anthems”. As proven by Metallica thumping their way through ‘Whiskey In The Jar’ like utter neanderthals with absolutely no self awareness, not everything benefits from being – or, indeed, needs to be – heavied up…and certainly not for the sake of it. Thankfully, this collection of cover tunes includes nothing as gut wrenchingly awful as that, but most of it should’ve definitely turned out better.

Things don’t exactly get off to the best start when Lynch and his assembled friends decide to hammer their way through the Eric Bazilian composition ‘One of Us’ (a monster hit for Joan Osborne) in a particularly pedestrian manner. Some songs just don’t suit being made heavier, and this is definitely one of them. The main riff is taken at a plod, sounding like one of the lesser tracks from Dokken’s mid-90s post-grunge period; the lead vocals are strong in their own way, but can seem just a little too overwrought after spending years being used to the song performed by either Osborne or Prince, and both of those things combined just make this recording seem like a pointlessly bombastic affair. Even a couple of decent lead guitar breaks fail to save face. Worse still, the old Motown hit ‘Nowhere To Run’ (recorded by Martha Reeves & The Vandellas and The Isley Brothers) is reduced to bar room rocker where lumpen guitar chords mesh against a thudding drum beat, while distorted vocals purely go through the motions. On the plus side, Pilson manages to weave a fat and complex bass groove beneath the general rawk – very much showing himself to be a world-class player – but it doesn’t ever make up for this gang of aging rockers choosing to wreck one of the best songs ever written. By the time Lynch leads everyone towards the fade by adding a loud riff on loan from The Stones’ ‘Satisfaction’, chances are, you’ll wish you’d never heard this. Ever.

Also deserving to be consigned to the bin, Duran Duran’s pop masterpiece ‘Ordinary World’ is presented as a dated, grungy hangover where emotionless vocals challenge a rumbling bottom end and half-arsed mellotron noise for the least interesting feature, before George Lynch fills several bars with a weird solo that uses various effects that sound like a bargain basement Tom Morello. This is actually a little…embarrassing. Carole King’s piano bouncer ‘I Feel The Earth Move’, meanwhile, becomes a trashy rock affair full of dirty guitar lines and crashing drums. It’s certainly another of those genuine head scratchers, but manages to be a little better than the Martha Reeves and Duran Duran covers despite itself. Most of the performance lumbers along feeling a tad unsure, but things definitely improve during a 70s funk derived instrumental break where the lead guitars dance wantonly over an electric piano that brings an all too brief retro charm. However, despite best intentions, a few bars of something interesting doesn’t save face. This doesn’t really work, and chances are you won’t want to hear it more than a couple of times.

Thankfully, the rest can either be described as interesting but flawed, or in a few cases, actually half decent. Madonna’s jubilant ‘Music’ could’ve easily fallen into the realms of nasty, but somehow it sort of suits being turned into a chunky rocker. Perhaps it’s that some of Lynch’s signature tones are clearer since this has a relative amount of swing and room to breathe, or maybe its that the vocals sound more at ease? Whatever it is, the assembled musicians actually sound like they’re enjoying locking into a groove without trying anywhere near as hard. Somewhere between an amusing musical experiment and a chunky sleaze rock car crash, R.E.M.’s wilfully complex ‘It’s The End of The World As We Know It’ is redressed as if Guns N’ Roses circa 1991 attempted a cross between funk metal and a cover of Motley Crue’s ‘Primal Scream’. Brian Tichy’s enormous drum sound is fabulous, as is Lynch’s chunky and shamelessly retro guitar work, but since this arrangement bears no resemblance at all to the source material, you might wonder why they couldn’t have saved the great riff and shred-fest of a solo for a more suitable self-penned banger somewhere down the line… Prince’s ‘Kiss’, on the other hand, works brilliantly as a funk metal number and with the band working a fantastic riff, Tichy gives listeners more than a glimpse of his juggernaut drum sound as previously heard on a few Stevie Salas live recordings. Lynch, meanwhile, takes the opportunity to drop in a fantastically melodic, blues oriented solo and overall, the recording captures plenty of the power and swagger of a classic rock band cutting loose.

A much loved tune from the 90s, ‘Champagne Supernova’ turns out much better than it expected. Lynch’s quieter bluesy side takes over from the outset and he fills the instrumental links with selection of soaring notes against acoustic strums, while the slightly gravelly voice actually makes this sound like an old slow rocker from the early-mid 80s. Throughout the performance, the vocal delivery is a huge improvement on Liam Gallagher’s tuneless drawl, and for classic rock fans, the fact that this slightly bluesier arrangement sounds as if it could slide into Led Zeppelin’s ‘Thank You’ at a couple of points will also be a plus.

When the musicians attempt to be more natural – as per their heavy rendition of Rufus’ ‘You’ve Got The Love’  – the quality improves dramatically, even to the point where this project shows its obvious merit. As proven by Stevie Salas and Living Colour (circa ‘Stain’), funk holds up well under some extra volume and this, by turn, is no exception. Pilson’s bass sounds like a truck and the heavy groove that’s quickly set in place not only sounds suitable for the job in hand, but so more natural than so many of this album’s other performances. The vocals come at volume, though never at the expense of everything else, and Lynch drops in a tasteful solo that still manages to remind you of his metallic origins without detracting too much from the source material. Even a reworking of OneRepublic’s ‘Apologize’ escapes unscathed due to someone deciding that melody and space would be beneficial to the end result. By keeping “pop” the main focus on the verse and merely bringing in the guitars on the chorus, the performance actually taps into the best of a twenty first century melodic rock/AOR sound and by proving that pop and hard rock can co-exist effectively, it merely begs the question – why couldn’t the rest of the disc bring other similarly high quality treats?

With a gathering of seasoned rock musicians and some great material in hand, ‘Heavy Hitters’ had the potential to be a classic covers disc. Unfortunately, the reality often suggests otherwise and aside from two or three decent performances, this record merely shows a band trudging through other peoples’ songs with no real love or care. It’s the kind of record that even the most ardent Lynch fan will play three or four times and then shelve forever. Approach with caution.