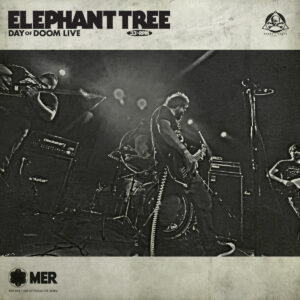 Home to Summoner, Ironweed, Zakk Sabbath and various other great stoner/doom bands, the Magnetic Eye label celebrated its tenth anniversary in 2019. Ten years of bringing the heavy to the masses is, indeed, worth shouting about, and what better way to mark the occasion than showcasing various Magnetic Eye bands at a mammoth gig?

Very much a “family celebration”, the Day of Doom festival featured nine different Magnetic Eye acts on one bill at Brooklyn’s Saint Vitus Bar, a venue barely big enough to contain such enormous riffs. Four of the sets were recorded for posterity, and while all have their moments – especially the Horsehunter set with its extended sludge metal jams and unapologetically live sound – the performance by the UK’s Elephant Tree is the best in terms of all round enjoyment and accessibility.

Elephant Tree’s studio albums are great, displaying a fine mix of big riffs and an occasional love of psychedelia. There are times when their recorded work doesn’t quite live up to its full potential due to their production sound being a little too thin, but in the live scenario, there’s absolutely no fear of the band coming across as lightweight. Beginning with a storming rendition of ‘Aphotic Blues’ – a highlight from their self-titled disc from 2016 – the crowd are quickly exposed to a great doomy riff, as guitarist Jack Townley cranks one of their heaviest grooves to create an instant impression. From inside a wall of feedback, the Crowbar-ish sound quickly takes shape and although a vocal seems a little lost within the noise at first, it isn’t too long before things balance and the Tree are able to fully capitalise on a great sound. From about a minute into their set, the band sound amazing; the shift to a fuzzier, less distorted riff on the main hook allows a few hazy harmonies to come through and moving into the second verse, they really sound like a band ready to give their all. Slowing down for the mid-section, the riffs are the aural equivalent of wading through a swamp, but for those familiar with the tune, the best is yet to come via the final instrumental break where the main riff is contrasted by fat sliding bass sounds comes across like a proverbial truck. Understandably, the lead guitar parts are half drowned by the bass distortion, but since this recording aims to capture the band in the most natural way, it’s easy to forgive any potential audio flaws.

Unbelievably, they’re able to take things up a gear for ‘Dawn’; Elephant Tree’s gifts for a groove are presented perfectly and as if experiencing one of Corrosion of Conformity’s slower numbers mangled by Buzz Osborne, the performance shifts between fuzzy stoner wonder and a great sludginess throughout. Despite a massive echo on most of the vocals, the neo-psych elements are obvious enough and Peter Holland’s fuzz bass solo isn’t just a highlight of this performance but the whole set. Following an all too brief lead guitar break, the track slides into a take on ‘Wither’ where the distortion makes Elephant Tree sound more like labelmates Wo Fat and, despite being ten times heavier than its studio counterpart, the original melody’s all-round spookiness holds firm. Much like the opener, some of the finer points of the vocal are lost, but this really doesn’t matter when so much more space is given to bending, ominous bass sounds and a classic doom riff throughout.

As ‘Surma’ begins its bass led groove, the lack of crowd noise and cleaner sound actually makes it harder to believe the intro comes from a live source, but once the guitars crank their opening riff, a pleasing level of distortion gives everything an enjoyably rough sound. Less doom and more desert rock, this track is an easy highlight, and the presence of one of the band’s best chorus hooks ensures something memorable for the audience. Throughout this live take, Jack’s vocals are at their strongest – perhaps due to the cleaner sound of the recording – and when dropping into the first semi-atonal yet brilliant solo, he sounds like a man willing to take the audience on a great musical trip. Even if a massive psych freak out never comes to full fruition, this track’s heady mix of stoner metal riffs and doom blues is massively appealing. Of particular note is the extended instrumental coda: Townley’s lead guitar work settles for a sound that’s three parts Tony Iommi and one part Frank Marino (in other words, fantastic heavy blues sounds cry out with ease) and it’s great to hear the band eventually experimenting with something quieter too, when a little jazziness creeps into a timeless sounding desert rock jam. This is easily the show’s stand out performance.

A more succinct ‘Suffering’ allows for a sludgy blues riff and demonic roars to truly rattle the walls, and although far from Elephant Tree’s most palatable tune, the fury in the heavily distorted lead guitar work on this night is impressive, as is drummer Sam Hart’s ability to keep a heavy beat together at all times without any temptation to inject the slow, pounding intensities with anything more interesting. Finally, an extended ‘Attack of The Altaica’ takes the crowd right back to the band’s early days when the heaviest sludge bookends moments of occult-ish psychedelia, on a performance loaded with spooked out vocals and ominous wails. From a doom perspective, some of the heavier riffs lend the set some standout moments and Holland’s bass solo has a speaker breaking level of distortion that’s almost jaw-dropping. From a broader viewpoint, things definitely peaked with ‘Surma’ – a must-hear for all doom and stoner devotees.

Granted, their performance isn’t as heavy as the Horsehunter set from this event – Elephant Tree dabble with a more melodic brand of stoner fare, relatively speaking – but this live set shows why the British band were among the best of the underground scene at the time of its recording. It’s all a little rough around the edges (in a good way), but this live document is a fine souvenir from what sounds like a great gig. It’ll certainly provide some consolation for the many UK based fans who couldn’t afford to make the trip.

[A live in the studio take of ‘Circles’ is included on the CD as a bonus track.]