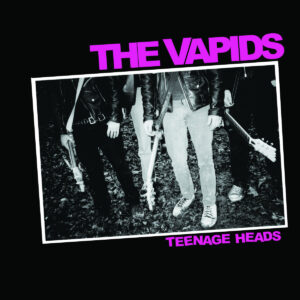 However, as much as The Vapids love Teenage Head (both band and album), their own ‘Teenage Heads’ is anything but a faithful reconstruction. If anything, they’ve taken the lyrics and then rebuilt the album from the ground up. The idea of a bold re-invention must have impressed Teenage Head themselves, though, since guitarist Gord Lewis found himself in the producer’s chair and the resultant album is…interesting.

The energy in the original Teenage Head recording is instantly present within The Vapids’ take on ‘Top Down’, but it sounds so, so different. Teenage Head did their best with a flat production sound and muted drum part, but The Vapids give the arrangement a genuine jolt by increasing the volume on the guitars and trading in an older punk/new wave sound for something more defiantly Ramonescore. The result is something that could’ve been spawned by the Lookout! Records label in 1994 which, obviously, is never a bad thing. ‘Ain’t Got No Sense’ continues a trend for sharpening things up, presenting itself like a brilliant homage to the Parasites, with guitars cranked throughout. This is particularly impressive during the intro when a shrill lead drops in to create something that sounds almost as if were meant to be an introductory fanfare. It’s much punkier than Teenage Head would ever have imagined their Generation X-meets-Shoes styled song could ever be, but it’s a fantastic performance.

Unfortunately, the drastically reimagined ‘Bonerack’ fares far less well. For three minutes, The Vapids crank their punk sounds with a real intent, but some fairly generic melodic punk is no real replacement for the original’s glam-ish intents. Don’t misunderstand; it’s good punk, but it’s no match for its late 70s counterpart where the music taps into New York Dolls trashiness and – even better – Teenage Head vocalist Frankie Venom sounds like a proto Bret Michaels. The Teenage Head original is one of those fantastic recordings where glam and punk collide and really couldn’t be improved. Things get back on track for ‘Picture My Face’ where The Vapids tear through three minutes of the purest Ramonescore. Against a wall of blazing rhythms, vocalist Jim Reed – responsible for all of this albums new arrangements – strikes the perfect balance between melody and brattish sneer, and the way the instrumental break takes cues from a couple of old Screeching Weasel tunes is truly inspired. Obviously, it sounds nothing like Teenage Head’s power pop track from the late 70s, but if you love classic pop-punk, you’ll be more than glad it exists.

With ‘Lucy Potato’ the pop-punk gives way to a purer punk, thanks to a world of buzzsaw guitars. Coupled with an energetic Hives-ish vocal approach and a no-holds-barred rock ‘n’ roll solo, it provides pogoing heaven that’s half a world from the original, while a crashy take on ‘Curtain Jumper’ descends into generic Ramones inspirations musically, to the point of nicking bits of ‘Judy Is A Punk’ for musical bridges. Any generic boredom is quickly averted by a cool call and response vocal on the chorus which would have suited Teenage Head’s power pop at the time, if only they’d thought of it… Another speed driven banger, ‘You’re Tearing Me Apart’ is taken from being glammy rock ‘n’ roll pastiche – somewhere between early Poison and classic Real Kids – into the realms of high octane punk pop. It could easily be one of The Vapids’ own numbers if you didn’t know better: guitarist John Gazzola and drummer Scott Johnston play up a storm, while bassist Chuck No Star anchors a solid rhythm throughout. Those who’ve lived with the original LP for decades might consider such a vigorous overhaul somewhat sacrilegious, but for anyone approaching this recording for the first time, there’s definitely fun to be had.

Pulling towards the close of the record, ‘Little Boxes’ pushes Chuck’s bass right to the fore with a great sound, while also making great use of buzzsaw guitar lines and shouty gang vocals. To be fair, most of these features where there on the original recording (although a far more muted fashion) and the basic melody is unchanged – it’s all just played more aggressively. Taking all of this into consideration, it might not be as interesting as some of The Vapid’s other covers, but in terms of genuine tribute, it’s the album’s highlight. ‘Get Off My Back’ replaces muddily recorded glam-punk for bristling 90s inspired pop-punk and is all the better for it, especially with Jim grabbing a hold of a couple of vocal hooks and ringing them for all they’re worth while Chuck and Scott lock into a perfect punk groove. Finally, ‘Kissing The Carpet’, with its Ramones love applied to a much rougher sound, allows The Vapids to show off their more raucous side. Blending a punk core with blistering rock ‘n’ roll edges, it’s just different enough to give the album a little variety, yet not different enough to upset the purists. With a relentless energy applied throughout, it rounds out a trilogy of superb tracks, closing this album in style.

The speed has been substantially cranked in more a few places and some of the songs are all but unrecognisable, but at the end of it all, this album still offers a brilliant listen in its own way. The Vapid’s own talents for churning out great punk at a pace is obvious every turn and most of the material is very tightly played. It would be nice to say that the quality of Teenage Head’s original compositions shines through, but so many changes made, this album is pretty much its own beast and definitely best enjoyed on its own merits. If you’re able to do that, then this disc is a sure-fire winner.