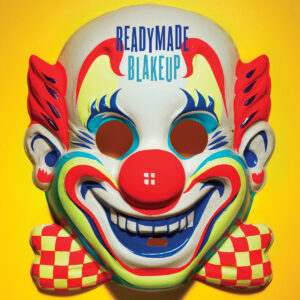 In the digital sleeve notes for the ‘Readymade Blakeup’ EP, Gay Elvis asks “Why did we even bother?”, somewhat rhetorically. Well, it’s simply that the songs were too good to waste. At their best, a couple of them are far too uplifting to have spent the rest of their days on an old cassette in a drawer. Even during the EP’s weaker spots, there’s enough entertainment value to please older fans and more than enough potential to win new supporters. These are songs that deserved a proper send off.

‘My Universe’ kicks off with much bigger melodies than Readymade Breakup managed on their last release (the lo-fi ‘Live With It’ from 2016), presenting a flurry of ringing guitars throughout the verses, sounding especially fantastic when joined by Rosevear’s strong tenor vocal. A mid section driven by twin lead guitars, a descending scale and a few bells all hint at a love of 70s pomp and bands like Boston and although there’s something very 70s about way the track unfolds, very Dave Grohl-like melody pumping the chorus more than exposes the era in which the song was written. There’s nothing especially new or flashy here, but between a flawlessly delivered hook and an arrangement that’s one part classic power pop and one part radio-friendly alt-rock, this is the sound of the reconvened Blakes coming back with a bang.

Equally strong, the driving rhythms and chiming guitars that power ‘Trespassing’ reawaken memories of forgotten 90s bands like Limblifter, while a jubilant verse brings out the very best in a great vocal. In terms of jangly 90s alt-rock, that would be enough to secure a great performance, but as before, it’s all change for the chorus and The Blakes usher in a wall of harmony vocals that evoke peak ELO, sunshine and similar throwback sounds from the UK’s Astral Drive. In short, this is fantastic melodic rock/pop. With traces of influence from bands you’ve always loved rubbing shoulders with the crunch of Readymade Breakup’s self-titled LP and the energy of the much-missed Mother May I, this is an unmissable three minutes.

Clinging onto its demo origins, the core of ‘Trouble In Opening Up’ features a muddy guitar/drum sound and a lo-fi vibe, but this is balanced by some great pop-rock where The Blakes unleash their inner Posies. With a slow burning tune eventually growing into something more majestic, the ringing guitar sounds are fantastic and another complex bass part from Elv lifts everything further. Along with a Jon Auer-esque hook forming part of the chorus (“I’m spilling my guts”), this is classic sounding power pop, and even though it’s been stripped of any sugary elements, it’s well worth an ear. Opting for something slower, ‘Jealous of The Sun’ isn’t quite as strong or instantly enjoyable. The music adopts a mid-tempo strum, often allowing for an aching vocal, while a heavy jangle takes the weight of the arrangement. The bass is pushed up in the mix once again and Elvis’s bendy lead notes add plenty of interest to an otherwise pedestrian tune. On it’s own merits there’s just enough to like here: the vocals are well constructed; the 90s guitar vibes bring a similar level of cool to other Blakes material…it just isn’t quite as punchy as The Blakes can be. In some ways, it’s actually a victim of the EP’s sequencing; the other tracks – and ‘Trouble In Opening Up’, especially – are hard acts to follow.

The events of 2020 – a global pandemic, people being furloughed from the every day toil of their 9 to 5 jobs, countries in states of lockdown and live music’s future looking uncertain – have led to a lot of reflection, so the timing of this release couldn’t have been better. It’s kind of natural that Paul and Elv would want to revisit their past and tie up any unfinished business. Whether or not The Blakes meant anything to you that first time around, you’ll be more than glad of their return once you’ve heard this EP since these power pop bangers are guaranteed to take your mind off of the everyday drudgery…at least for a while.