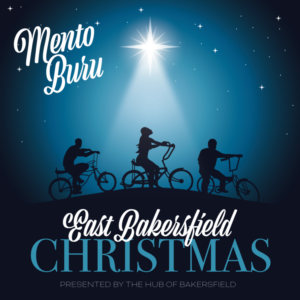 One of the best xmas songs ever, ‘Jingle Bell Rock’ (originally recorded by Bobby Helms and given a brilliant makeover by Brian Setzer) actually works very well as a ska based tune. The previous vaguely country air and swinging riffs are replaced by chopping guitar lines and punchy brass. Setting it up as if it were a classic ska piece from the 90s, Mento Buru effectively rebuild the music from the ground up, but ensure this is quickly recognisable by not changing the vocal melody one iota. It’s actually a smart move, and while you might think a semi-crooned vocal might jar against a frivolous tune, due to a huge display of confidence, Matt Munoz makes it sound like the most natural musical marriage in the world. Musically, the band are in great shape: the guitars approximate a sound somewhere between garage rock and 50s twang; a warm bass dances throughout and the brass is understated but fleshes out a great melody. In fact, the way the trumpet is used to punctuate the closing bars is surprisingly tasteful. In terms of presenting something overly familiar in a whole new way, Mento Buru really hit the mark here. An instant classic, the always uplifting ‘Feliz Navidad’ gets a complete ska makeover, inviting full-on skanking throughout. Cranking the guitars, Mento Buru prove that they’re more than able to muscle in on the Reel Big Fish sound, even if something more traditionally Jamaican is often their preferred. By opening with a guitar driven riff that sounds as if it could drop into The Beat’s ‘Mirror In The Bathroom’ at any second, the band instantly get listeners on side, and once the melody explodes into a full scale ska bounce, there’s no mistaking how brilliant it is. The tune that’s quickly set in place is lovably frivolous; it’s perfect for the song’s repetitive vocal refrain – a brilliant hook that sounds as if it were always meant for sunny climes – and during an especially upbeat instrumental break (complimented by familiar shouts of “pick it up, pick it up”) you really feel as though you’re in the presence of a great ska band in full flow. This is absolutely brilliant – an instant highlight on a filler-free release.

Another instant classic, ‘What Child Is This?’ (aka ‘Greensleeves’) allows a brilliant horn section to take the lead. Driving a very familiar riff, the trumpet is bright, but in many ways it’s a sultry sax and moody trombone that win out since these take the weight of the melody. Shifting the focus midway to allow for a superb organ solo and absolutely killer trombone break, this is perhaps the point where Mento show off their musical skills most obviously. By making the traditional melody sound like a deep cut from the Rico Rodriguez catalogue, it’s easy to understand why such so many legendary bands (and The Aquabats) have been keen to take these guys on the road. Nat ‘King’ Cole’s ‘The Christmas Song’, meanwhile, is transposed to a slow lover’s rock groove where a deep bass and wheezing brass compliment a relatively smooth vocal. It takes a little longer to tune in: the music is fabulous in the way the mellow backbeat drops a lazy, summer groove and the featured sax solo is flawless, it’s just a little unnerving to hear something you’ve always known sung in such a way. A few plays later, there’s plenty to suggest it isn’t as good as ‘Jingle Bell Rock’, but could still provide a welcome distraction on your well curated festive playlist.

Rounding out this yuletide banger are two versions of ‘Donde Esta Santa Claus?’ (one in English, one in Spanish), which applied to a standard Jamaican reggae rhythm sound like a shinier versions of an old Trojan classic. In many ways, the mix of ska, mento and Spanish elements applied to a Christmas scenario brings everything much closer to novelty, but as before, there’s no doubting Mento Buru’s musical talents. The easy brass has a great sound; Matt’s vocals, although reinforcing an Hispanic accent for effect, are perfect for the job in hand and the rhythm section really excel through a display of all round tightness. It might not quite reach the the heights of ‘Feliz Navidad’ and ‘Jingle Bell Rock’ for all round brilliance, but it’s a great performance.

If you’re a fan of Christmas and holiday songs in general, you certainly own these songs in their most familiar recordings already. You possibly even own other takes from a range of pop and rock musicians, but this – ostensibly sounding like a summer disc – lends a whole different vibe to those festive favourites. Although never meant for year round regular spins, you’ll get enough pleasure every December to make it an essential download.