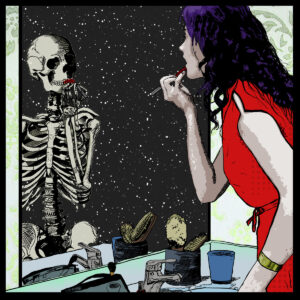 On their melodic space rock/stoner LP ‘The Sound of Color In Space’, Ghost:hello managed to be inventive and accessible. Although a heavily treated vocal in places could’ve made some of the material hard going, a solid commitment to a genuine groove and extensive use of synths to reinforce the other-worldly quality of their sound brought out the very best in the musicians. If you’re familiar with that record, chances are you’re expecting more of the same here. You’d only be right to a point.

The strongest of the studio tracks, a cover of The Toadies’ ‘Tyler’, actually offers the most logical progression from the previous album, with a few floaty elements really pushing for more melody than ever before…at least to begin with. The way the track opens with a classic stoner sound but quickly moves into a weird space rock vibe (thanks to vocals sounding like theramins) could almost see this likened to a heavy version of Mercury Rev. That intro is everything: its fuzzy moods evoke detachment; there’s an unsettling beauty within the cold sounds and, indeed, it becomes more than an intro once those sounds are allowed to lurk beneath other parts of the track. In the main, though, there’s a heavy stoner groove to be explored, some brilliant fuzz guitar and a mid-tempo sneer that could call back to any number of stoner rock greats. The vocal is somewhat of a weak link – the delivery isn’t always melodic and the way the voice is used more than occasionally signifies distress – but, as a whole package, it’s great. The music is certainly good enough to carry these four and a half minutes and it shows that Ghost:hello are more than willing to musically progress, even if it means applying their ugly sounds to someone else’s tune. Cover tune or otherwise, if you enjoyed the album, you’ll certainly want to hear this.

The other studio based number, ‘Suit Up’, opts for more of a classic Sabbath/doom sound, throwing out a slow riff centring around four massive chords. Ghost:hello’s weird dystopian futurist vibes ensure this never sounds like an old 70s throwback, though. By countering the doom laden guitars with blankets of synths that switch between sounding like a weird alarm on the verses and dropping into spooky prog rock vibes during the instrumental breaks, there’s more than enough invention throughout. The addition of some live sounding drums and a heavy fuzz bass allows the riff to dominate and, musically, it’s all good. A really throaty vocal will split opinion, and although the chosen style often jars, it isn’t enough to spoil the performance even if there’s sometimes a feeling that this could come at the expense of some great stoner melodies. Overall, though, there’s some great stuff going on here – and if you find yourself able to attune to that vocal, it’s even better. Rounding out the Ghost:hello half of this split, a live take on ‘Burnout’ (a standout from the previous long player) offers some classic stoner grooves. The live recording brings out the best in the band at every turn. Between the flat drum sound and the synths having a much louder presence, the coming together of stoner rock’s history and Ghost:hello’s futurism is perfect. Add a heavy fuzz and a wonky melody that (perhaps by coincidence) calls back to Jon Lord’s ugly keyboards on Deep Purple’s 1974 instrumental ‘A200’ and you have something that deserves to be heard at maximum volume.

The three tracks from Ohio based doom/noise rock band Night Goat are immense. ‘Inverted Burial’ fills the better part of four minutes by switching between a sparse riff complimented by a spooky vocal. This comes across like a cross between a deep cut from Sonic Youth and some kind of voodoo hex. Whatever it is, it really captures the band’s more atmospheric elements very well. Naturally for a band named after a Melvins song, there’s also a reasonable amount of oppressive heaviness here too, and during what passes for a chorus hook, guitarist Chris Bentley unleashes a huge sludgebeast of a riff, designed to bludgeon the listener repeatedly with every passing chord. Moving into ‘Possession’, Night Goat crank up their arsenal of riffs to create this release’s standout track. A raw, DIY production gives everything a huge echo and with vocalist Julia Bentley half buried in the end mix, her performance takes on even more of an other worldly vibe. Hearing it is like hearing an early Stooges track reworked by ‘Zodiac’ era Melvins and then left in the hands of L7. The relentless groove combines garage rock chords and stoner rock fuzz to unleash a brilliant lo-fi end sound that gives a perfect example of a band just going for it at every turn. With a fierce lead guitar applied en route, this is a grungy noise rock affair that has a huge retro heart.

Finally, Night Goat allow their moodier side to take over when ‘Cult’ flaunts a punchy bass and shrill guitar effects to underscore a brilliant dual male female vocal. More goth than their usual sound, it’s great to hear them branching out. There’s a great deal to enjoy here: a compliment of tribal drums underscore a repeated refrain that becomes infectious from the second or third play; a crooning voice reinforces Night Goat’s most gothic traits and a few heavy riffs that recall the earlier Melvins are on hand for some genuinely heavy lifting. For those who might not enjoy the idea that bits of the performance resemble a dour hybrid of Fields of The Nephilim and Sonic Youth, (although that would show a severe lapse in taste), the chorus will be enough alone to make this enjoyable. With an ascending guitar riff, a shouted refrain and a wall of sound that will be unmistakable for fans of their 2019 LP ‘Milk’, this offers a great addition to the Night Goat catalogue…and is easily the standout track from this split release.

Whether or not the names Ghost:hello and Night Goat are already on your radar, if you’re a fan of the noisier end of stoner rock and/or grungier end of the noise rock spectrum, you’ll want to hear this. ‘Cult’ and the live take of ‘Burnout’ are recommended for first time listeners and for the bigger fan of either of these Ohio noise-makers, the cost of a download certainly won’t be money wasted.