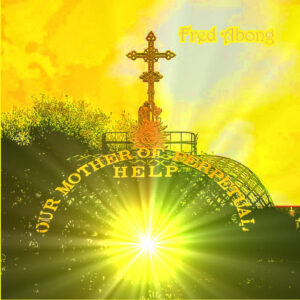 The global pandemic that ground the world to a halt in 2020 put an end to live shows, but Fred took the time to work on a new material and a full length album, ‘Our Mother of Perpetual Help’, emerged in the November of that year – just in time to for the dying moments of a troubled year to be injected with some welcome DIY oddments. For those familiar with Abong’s previous work, the album will seem similar in many ways: there are no choruses to speak of. There are no flashy solos. Sometimes the musical arrangements are so sketchy, they could be in danger of breaking at any point. As before, Fred’s songs sort of act as thoughtful mantras set against a lo-fi Guided By Voices-esque backdrop. It’s the natural successor to those EP releases, yet at the same time, it doesn’t always seem like a quick and easy retread. You could even say there’s very little that’s “easy” about these ten songs at all. To experience them in one sitting is a little uncomfortable; like eavesdropping on personal therapies. At the very least, it’s as if you’re experiencing sounds that aren’t yet fully grown and ready for mass consumption. Regardless of this, the album is always interesting and especially so if you’ve followed Fred’s progress leading up to its release.

In terms of guitar playing, ‘Cork’ is an instant standout since Abong quickly grabs the attention with some minimalist string-bending oddity, creating something that sounds like a cross between a mangled old blues and something from the Bob Mould back cat. Even once a fatter riff arrives, the tune clings onto a minimalist coldness, while Abong’s worn and weary voice adds extra interest. He never seems to truly lock into the quasi-melody in hand; instead his uses his voice almost as if it were extra instrumentation. Delightfully off-key, he takes us through a very stylised take on a breaking relationship, with the opening gambit “If you wanted to screw my heart to the wall, I’m here after all” being particularly unnerving. In an instant, his distinctive lyrical approach combined with downtuned solo electric/acoustic guitar accompaniment seems like an old friend. Admittedly, it’s not a friend who’ll necessarily give you an uplift, but more a figure ready to hit you with a stark honesty. This is a man who’ll open your mind to feelings that are long buried, all the while reminding you that Robert Pollard and Tobin Sprout never had the monopoly on such lo-fi cool.

A must hear, ‘Kissing Carnival’ manages to convey an ominous sound, despite offering a fuller sounding riff powered by shimmering chords. In a way that sounds like a demo for an old 4AD dreampop recording, in that its simplicity and unsettling nature are everything it needs to make it work. With a lack of drums and other embellishments, it’s down to the mid tempo jangly sounds and forlorn voice to carry everything with some striking imagery. Lyrics that recall the brightness of “fireworks burning through fog” could be taken metaphorically as finding a new frame of mind (much more inventive than the well worn “light at the end of the tunnel” motif) and the juxtaposition of darkness and optimism make it classic Abong. ‘Worm’ grabs a hold of a downbeat mood and combines it with a rigid, dark folk vocal where Abong warns us “you can’t please everyone” and “the wheels are coming off the parade”. As with ‘Kissing Carnival’ there are glimmers of hope in the pay-off, as Abong realises “if it comes undone, you’ve been beat”, but even with the help of a more forceful vocal and harder edged tune, it’s a difficult listen. More discordant than usual, it’s almost like experiencing Robert Pollard venturing into the sad world of Red House Painters and won’t be for everyone.

‘OMOPH’ provides another of the album’s highlights, as Fred trades in the doomier elements for some bright electric guitar sounds which provide a natural counterpart to his naturally husky vocal. The chords come in waves, interspersed by lengthy pauses at the end of each bar; the tones revisit a couple of Belly’s moodier intros and these factors alone make it a little more accessible. In a natural fit with the other numbers, the sparse appears to rise above any extraneous influences and the performance seems to exist in its own little lo-fi bubble. In a similar mood, ‘In Bed’ supplies a fine, ragged dream pop-ish riff against a vocal melody that never tries too hard. The way the chords rise from the gloom to inject a little extra interest midway but without breaking the unsettling feeling that’s been so quickly set in place is a natural fit for this album, as is the lyric capturing the feeling of something that could break at any moment. “Straight and narrow we dream and stare / And hold to our cracking hull all the jetsam we push and pull,” Abong warns us, as if taking on the role of soothsayer. It’s here that ‘Our Mother…’ certainly asserts its place as one of 2020’s most introspective albums.

Midway along this downbeat musical journey, ‘The Lock’ revisits more of a ‘Homeless’ era style with a fuller and more direct sound as Abong chugs at his electric guitar. There are no further twists; the opening riff repeats across a relentless two minutes, and yet there’s something about this track that never tires. The way the performer uses that riff to slowly crank up an uneasy feeling and still draw in the listener is a classic example of his distinctive compositional approach: there’s almost nothing here, yet if you can find yourself absorbed within its dour sounds, it begins to feel like everything. ‘Electro Panic’ brings a little musical respite and a little more bounce thanks to the presence of a high toned note placed in the centre of a more buoyant riff. Abong’s playing is strident – hard even – and you’ll wonder how this busier mood will sustain the rest of the track. It doesn’t: it takes a dramatic twist en route to revisit shimmering dream pop riffs where Fred’s use of effects pedals make his guitar truly ring. Again, the echoes of the 4AD label’s greatness inform the sound, and anyone still reaching for late 80s shoegaze will almost certainly be intrigued by the musical ideas here, even if the send off is somewhat demo-like.

‘Invisible Man’ opens with a heavy riff that echoes an old Nirvana demo before shifting through a couple of indie riffs that may have suited a couple of old Throwing Muses tunes. Like ‘Electro Panic’, very much sounding like two musical sketches glued down the centre, it’s left to Abong’s voice to hold it together, which he manages more than ably, before ‘Capital P’ closes the album with something a touch more melodic. With his amp cranked enough allow distortion to be heard throughout, Fred latches upon a circular guitar riff and applies one of the album’s smoothest vocals accordingly. Obviously, any notion of “smooth” is relative, but there’s more of a leaning towards singing as opposed to mumbling a confessional. The way the guitar part underscores a voice that feels as if it’s calling from a small room in the hope that ears will hear creates fine lo-fi indie fare – almost like discovering a rough demo from Bob Mould’s similarly cathartic ‘Workbook’. While it might not appeal to a wide audience, those who loved ‘Homeless’ should continue to be drawn towards Fred’s minimalist charm.

Abong’s best songs have always been presented in a way that always makes the listener work a little harder than most, but ‘Our Mother…’ takes his previous dark moods to further extremes. Shorn of any kind of bombast or excess volume, there isn’t even much of that could be compared to Throwing Muses, even at their most obtuse and these ten musical vignettes are often challenging. However, the release adds something of genuine interest to his solo catalogue and in ‘Electro Panic’ and ‘Cork’, the album offers two of his best recordings to date. ‘Our Mother of Perpetual Help’ is far from an easy ride, but if you’re prepared to invest the time, somewhere within its stark and unsettling fragility you’ll find a record that’s strangely fascinating.