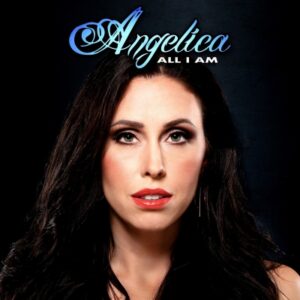 Released seven years after that very enjoyable long player, ‘All I Am’ could’ve worked the same formula, but in some ways is a very different record. The eleven tracks look to an obvious AOR root for its massive choruses, but in some cases, the arrangements replace the big 80s US-derived rock sound with something a little more modern and very European. The best example of this comes with the energetic ‘Beat Them All’ which underscores the wall of guitars and vocals with a very mechanical sound that’s one part Europop and one part goth-rock a la Lacuna Coil. It may not be what the AOR purists would want, but when it’s all delivered with as much enthusiasm as Rylin can muster, it’s pretty hard to dislike. Similarly, ‘Calling’ – used to open the album in an oddly cold fashion – combines the programmed beats with a harsh guitar sound and thin production values, leaving only Rylin’s voice as the only real melodic point of interest. Thankfully, her accented delivery has as much charm as ever – and particularly so on a great pop-rock hook.

Due to a huge soaring guitar during the intro, ‘Addicted To You’ hints at something more AOR-centric, but it only takes a few seconds before the mechanised beats take over once more, making for a verse that’s much closer to the pop of Eurovision circa 2017 than the previous Robin Beck vibes of ‘Thrive’. As before, though, a simple and melodic chorus is enough to steer things in a confident direction and Angelica’s poppier take on the European pop-goth movement sounds decent enough. Thanks to a great voice and various strong melodies cutting through the coldness, It’ll certainly have some appeal for the pop-rock fan with a more open mind and less demanding attitude. A little more of a slow burner, ‘Still Bleeding’ takes the mechanical heart and mixes it with another big AOR chorus. The verses seem unsure of themselves at first, but the big hook rescues everything and actually ranks among the best melodic rock choruses of the era, sounding like a cross between one of Dante Fox’s old tracks and a couple of Scandinavian rockers. A great song deserves a great end mix, but unfortunately, that’s something that is missing here. Obviously, with Angelica being the star here, a dominant vocal should be expected, but despite having a great song in hand, there’s something a little amiss, when only the vocal seems to stand out. Even when that chorus breaks into more traditional AOR fare and the band’s general volume increases, there’s nowhere near the kind of punch you’d hope for. In fact, everything sounds a little unfinished: the whole album is thin sounding and almost free of obvious bass, but this number comes across as sounding especially cheap and demo like in places. That’s a pity, as there’s obviously a great song here crying out for a much better send off.

The rest of the album resembles Angelica’s previous melodic rock disc far more closely – horribly cheap production values, notwithstanding – and will certainly provide just enough entertainment for fans of that record not to be disappointed with ‘All I Am’ in the long run. A clear standout, ‘Living On High Hopes’ recycles some classic melodic rock sounds as a world of chopping guitars and jubilant vocals deliver the kind of number the genre was made for. The upbeat arrangement and central message of “keep on believin’” care not for anything fashionable, but if you hanker after those old Stallone film soundtracks or still enjoy the works of Jimi Jamison, there’s plenty to love here, especially considering Rylin absolutely nails the performance throughout. Also from the top tier of tracks, ‘Time and Space’ wheels out the kind of mid-tempo riff that’s best used on tracks called ‘Don’t Walk Away’, while the rest of the verse appears to rework some classic Robin Beck vibes. Like ‘Still Bleeding’, the chorus brings out some pretty big guns when it comes to shameless 80s melodic rock sounds, so once you’ve factored in a couple of multi-layered guitar parts courtesy of the should-be legendary Michael Palace, it becomes a must-hear.

Switching to ballad mode, ‘Angel’ opts for something even more simple. A relatively sparse opening verse makes a more obvious feature of the vocal; a well-constructed MOR hook brings in a few more guitars, but never really rocks. If anything, there’s a lot within this arrangement that would be better suited to country music; a feeling that’s very much reinforced by an ache within Rylin’s performance. There’s more than enough AOR traits lurking throughout to keep the usual fans happy – Palace’s guitar work taps into some greatly emotive melodies and the multi-layered vocals that usher in the climax are of the timeless 80s AOR/MOR variety – but there’s plenty to suggest it would’ve worked better had the songwriters passed it on to someone else. If they could’ve palmed this off on the up and coming female country star du jour, they almost certainly would’ve made more money.

By opening with a stripped back arrangement showcasing voice, piano and acoustic guitar, the huge power ballad ‘I’m Sorry’ provides a much better showcase for Rylin’s vocals than most tracks on the album. When approaching softer melodies on this number she sounds like a seasoned professional, and even once the number explodes into the kind of track you’d have found on several dozen AOR albums between 1985-89, she somehow manages to approach it as if it were fresh. In AOR terms, its hard to find fault with any of the featured players here. Besides Rylin’s commanding vocal, Palace turns in some really fine guitar playing. Although his featured solo is devastatingly short, his busy and sweeping style is an easy match for any of the 80s greats and multi-instrumentalist Daniel Flores adds a few hefty drum fills. Without labouring a point, if only this could have been given a more sympathetic production/mix, it would have been even better. As it is, attempting to pick out the finer points of the arrangement during the louder climax is very difficult when faced with a treble heavy brickwalled sound. Angelica certainly deserved better.

‘All I Am’ is the kind of record that tries hard, but doesn’t always truly hit the mark. On the one hand, it’s good that Angelica and her team have opted to mix things up and play things a bit differently on this second LP, but on the other, those mechanical and poppier efforts – as good as they may be for the style – might not win the long term affections of the more dyed in the wool AOR fan. As before, Rylin is at her absolute strongest when recycling moods from the late 80s, and in that respect, ‘Time and Space’ and ‘…High Hopes’ are as good as anything on the debut. Unfortunately, by not always being the most focused of releases and having being lumbered with such a terrible end mix, ‘All I Am’ all too often struggles to do its very best, and that should never have been the case with songs left in the hands of a great vocalist and with one of the scene’s most gifted guitarists present on everything… For those who only expect basic entertainment from their melodic rock, this record will definitely still fulfil a requirement, but measured against a couple of Rylin’s previous recordings, it definitely should’ve been better.