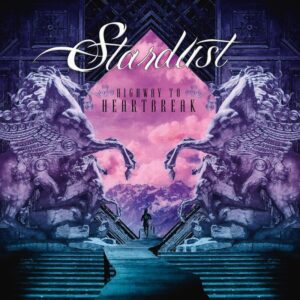 Much like the EP, ‘Highway To Heartbreak’ doesn’t really care for fashion. As its title suggests, it really isn’t shy in exploring many, many old AOR clichés – something reinforced by songs with names like ‘Runaway’, ‘Eye To Eye’ and ‘Shout It Out’ (though, regrettably, there’s no ‘Don’t Walk Away’) – but what Stardust do, they do very well indeed. This becomes very clear after just one listen to ‘Bullet To My Heart’ which flaunts a classic AOR sound with tinkling keys and pumping bass. With choppy guitars and a vocal that falls somewhere between a Steve Perry impersonator and any number of Swedish singers in the Work of Art vein, it immediately throws listeners back to the glory days of 1989. Stardust’s sound is based on pure homage, but Adam Stewart has a very strong presence in the vocal department and guitarist Facey quickly demonstrates an ability to value melody over showboating. It’s the sort of track that only requires a couple of plays before you feel like it’s something you’ve always known…and that alone makes Stardust a great fit with the label’s purer AOR acts.

A slightly more complex piece, ‘Eye To Eye’ kicks off with an enormous swaggering riff, before dropping into a track that flaunts another Journey-esque vocal, some fine pompy keys and – best of all – an instrumental section that teases with a jagged machine gun rhythm before breaking out a busy but melodic guitar solo. In some ways, it sounds like two separate ideas welded together, but thanks to some great playing – particularly from guitarist Facey – and a very strong vocal, it more than manages to secure a place as one of the album’s highlights. Similarly confident, ‘Shout It Out’ presents a barrage of stabbed keys set against a great, driving riff and manages to couple a very American sound with a shamelessly Euro chorus that aims to rouse an audience. Although resulting in some grand fromage, between the gang vocals delivering the main hook, a flawless solo full of fantastic sweeps and a brilliantly crashy riff linking the verses (and on loan from an old Bon Jovi song) it’s very well crafted. This has more infectious “whoah”s than sanity necessitates, but they surely know it.

Making no secret of a love for Def Leppard, the mid-tempo ballad ‘Can’t Stop Lovin’ You’ takes the bulk of ‘Hysteria’ and ‘Stand Up (Kick Love Into Motion)’ and recycles them rather obviously. Although this is somewhat plagiaristic musically speaking, it still results in a song that shows Stardust in a favourable light. The less busy arrangement and shiny sound really allows Adam to unleash his inner Hugo, and Facey certainly relishes the gentle pace, filling his allotted spot with a solo that’s absolutely loaded with soaring notes and a love for 1987. With ‘Heartbreaker’, the album features something that will be familiar to almost all listeners. A reworking of the old Pat Benetar track, it replaces the early 80s edges with something heavier where the combination of a dirtier guitar sound and some very clean, 80s sounding keys makes a great contrast. At first, hearing something so familiar played in this way is a little off putting, but given time to adjust, this old pop number is given enough muscle to become a fun rocker. A little more distinctive, ‘Hey Mother’ throws out some great staccato guitar lines before blooming into the kind of track you’d have found on a Stallone film soundtrack back in the day. With a full compliment of harmonies driving a strong hook, a few Survivor-esque vocal nods and a guitar solo that could rival Michael Palace’s best, it ticks all the right boxes for a future melodic rock classic.

Blending a clean guitar sound and a few pompy keys, ‘2nd Hand Love’ shows off some decent melodic rock chops, sounding like a cross between an old Def Leppard tune – something reinforced by a very Phil Collen-esque guitar part – and something from Lionville. AOR by numbers it may be, but Stardust sound authentic enough for it to pass for something thirty years old at the time of release. Joining a bunch of solid AOR/melodic rock tunes, ‘Perfect Obsession’ not only changes the mood, but also manages to be one of the album’s stand out tracks. Trading in the more obvious 80s melodic rock sounds, this number finds Stardust tackling the a semi-acoustic power ballad. Its obvious jangly roots suggest inspiration was taken from Skid Row’s ‘I Remember You’, but there’s something about the rootsy edge to the chorus that makes it seem closer to an overspill from the Dawson’s Creek soundtrack. The vague Americana tinge is occasionally reminiscent of bands like Dog’s Eye View and Billy Pilgrim, but at the same time, the lyrical content and a slightly more bombastic section bring things back to AOR territory. This, of course, means that although this is a little different, it never sounds too out of place. Closing the album, ‘River Is Rollin’’ is another stand out – and by tucking it away at the end, it shows that someone understands the value of sequencing an album; this record is in absolutely no danger of being front-loaded. In what appears to be another slight change of mood, this number teases with a bluesy riff, presumably tipping the hat to Wagener’s production on Skid Row’s ‘Monkey Business’ single. It’s just a ruse, though, as after a few bars of this, the band settles into some of the purest AOR sounds, delivering a Journey/Bad English hybrid that’s absolutely unashamed in its love for 1989. The rhythm guitars pluck out a melody that should’ve been used for a song called ‘Don’t Walk Away’; Dave Legrand’s keys lend an equally melodic touch and for lovers of the style, it could become a potential favourite.

In many ways, this album represents AOR by numbers, but within its instant familiarity there are some great tracks waiting to be discovered. At least seven of these are first rate melodic rock, but even the lesser material often has its own strengths. Being critical, perhaps the inclusion of the Pat Benatar cover is unnecessary (especially when Stardust are such assured songwriters themselves), but if a familiar tune is what’s needed to reel in a few extra listeners, then it’s all to the good. If you like big, old fashioned 80s rock, ‘Highway To Heartbreak’ will pass a more than enjoyable fifty minutes…and if you’re not too fussed about any originality, you’re guaranteed to like it even more.