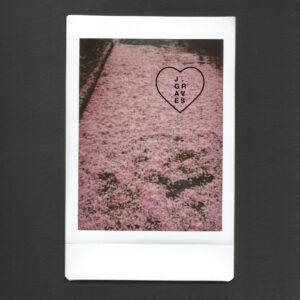 Naturally, the new Illumin’s inaugural release came from Jessa herself, and ‘Deathbed’ (released in October 2000) showcases a great mix of hard indie, classic garage rock and oddly danceable rhythms. More importantly, this concoction of enjoyable DIY sounds is topped by a fantastic vocal throughout, where J. demonstrates a vocal range that falls somewhere between the quieter end of Exene Cervenka’s best work and Karen O. at her most melodic.

The strongest track, ‘Lo The Mourning’ kicks off with a great, crashy riff that sounds as if it could descend into a classic Sonic Youth jam at any second. Having grabbed your attention with something abrasive, the verse drops into a shuffling rhythm where rattling drums and chopping guitars collide while Graves throws out a soulful cry. The intro riff is by no means a red herring; it’s used effectively to link the verse and the chorus, but the track manages to outdo even that when it changes entirely for a heavy militaristic rhythm where sparse music gives Jessa’s voice plenty of room to stretch out. There are echoes of White Stripes here on occasion, but between the vocal style and rawness of approach, it’s also very much a welcome throwback to Yeah Yeah Yeahs ‘Fever To Tell’ album. It should be sought out as priority listening by anyone who ever felt that band lost their way on their journey for more commercial pursuits.

The rest of the EP latches onto a similar style, but takes a little longer to appreciate. The title track begins slowly with an unaccompanied guitar which gradually builds throughout two verses while Jessa curls her voice in a surprisingly soulful way. Reaching the point where you’d expect the explosion of a chorus, a broader guitar adds a harder melody, but the track never lets go of its original mechanical melody. The band are tight enough in their garage-ish style, but it’s Graves who remains the true star here, turning in a classic vocal that sounds just so natural, you can’t help but be drawn to it. The sparsely arranged ‘Time Travel’ at first utilises a live sounding drum and an oddly tuned guitar suggesting a dusty dive bar, before exploding into something harder, drawing a closer parallel with the driving sounds of her 2019 album ‘Marathon’. Although what transpires is a slab of straight up garage rock where her hard strummed guitar and crying voice battle for the dominant role, it’s enjoyable in its familiarity.

Finally, ‘331’ explores a more buoyant rhythm and a broader melody. Sounding like the Yeah Yeah Yeahs jamming on a Breeders deep cut, it’s perhaps the EP’s most commercial tune, but its sharp edges and raw mix ensure it won’t ever stretch too far beyond cult appeal. The way Graves uses her voice to move from quiet mumbles to a full scale cry on what passes as a chorus really makes the track, but with each listen, its the kind of number that brings something great.

In just four songs, Graves manages to reel in the listener with a strikingly economical approach. There are moments where the material feels a little looser than on her 2019 long player but the voice and the sinister undertones have stayed firm. If you’re already familiar with Jessa’s work, you know you want this; if you’ve not yet had the pleasure and enjoy Yeah Yeah Yeahs and – to a lesser extent – Spinnerette and solo Brody Dalle, this EP needs to be added to your ever-growing listening pile ASAP.