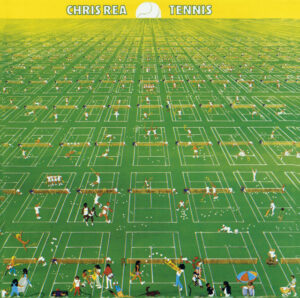 Chris Rea’s extensive catalogue has never been given the credit it fully deserves. While many of his albums have remained available in various territories, only a few have been reissued in a deluxe format. In many cases, that’s not even because there isn’t a lot of non-album material. There are live shows sitting in Euro TV archives, which could be used for both audio and visual extras alongside various b-sides and other material. With a few of the bigger albums receiving 2CD editions in 2019, it would be a real treat to see Rea’s third album, 1980s ‘Tennis’, afforded an expanded reissue.

Following two excellent albums of radio friendly rock/pop (1978’s ‘Whatever Happened To Benny Santini?’ and 1979’s muchly overlooked ‘Deltics’), Chris’s first album of the 80s took a slightly darker route in places, both musically and lyrically. This didn’t stop it getting some of the biggest UK promotion Rea had seen to date. A show from the subsequent tour was recorded by the BBC, highlights of which were broadcast on the radio. That show has never seen an official release and currently sits in an archive on one of the many fabled BBC Transcription discs. In addition, there’s also a solitary non-album b-side – somewhat of a rarity for Rea’s early releases. Combined, these extras would make for a more than admirable deluxe set.

Since it took forever for a deluxe ‘Road To Hell’ to hit the shelves, an expanded reissue / deluxe version of ‘Tennis’ becoming a reality seems about as likely as Steve Vai rejoining Whitesnake, but as always, we can dream. In an ideal world, a “Championship Edition” would look something like this:

Disc One: Total time – 50.02
Tennis
Sweet Kiss
Since I Don’t Have You Anymore
Dancing Girls
No Work Today
Every Time I See You Smile
For Ever and Ever
Good News
Friends Across The Water
Distant Summers
Only With You
Stick It

Disc Two: Total time – 33.27
Intro/Letter From Amsterdam (live)
The Things Lovers Should Do (live)
Good News (live)
Dancing Girls (live)
Every Time I See You Smile (live)
Sweet Kiss (live)
If You Really Love Me (non-album b side)