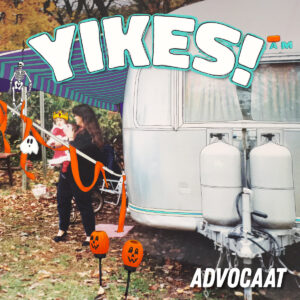 Pennsylvania two piece Advocaat are a punk band who truly value melody and hooks. The core of most of the songs from their debut EP ‘Yikes!’ call back to the early days of Face To Face, Down By Law and the rockier – less Ramones-y, less skate-oriented – end of the US punk scene, and each of those highlights both great playing and songwriting. What’s more, their songs don’t just recycle these influences in the same old way: as offbeat as their choice of name, the duo seem unafraid to inject these punky sounds with a couple of adventurous alternative quirks.

Their love of a sharp but melodic style comes through immediately. By the time ‘Neighbourless’ hits its fourth chord, the riffs are taut and ragged, but they’re underscored by a heavy bass melody placed high in the mix. Approaching the verse, the chords become a touch more sedate as the ringing edge is joined by a thinner and choppier style, but once the band interject a couple of pure rock and roll fills, the track secures itself as a strong opener. There are traces of Face To Face driving the number, but also an obvious influence from Dutch punks Funeral Oration at their most accessible. In terms of melodic punk it’ll be instantly familiar, but between a great riff and confident vocal from Kyle Caffrey, it makes a great addition to any punk playlist. Ushering in even more of Advocaat’s more melodic side, ‘Badly’ fuses a few pop-punk chords to a tune that takes cues from a few old 60s hits. In a sidestep from the usual ‘Leader of The Pack’ style homages, there’s something about this tune that, perhaps, owes a little more to Dion, while frontman Caffrey – unexpectedly – curls his voice in a way that gives his performance more than a passing resemblance to ex-Barenaked Ladies man Steven Page. Here, Advocaat’s fusion of classic pop punk and a smidgeon of alternative rock sounds great, with a really full sound for an independent recording.

Somewhat of a musical cuckoo, ‘No Plans’ kicks off with a heavy chord, before lurching head first into a thrashy hardcore workout that’s much heavier on the drums. In addition to the more dominant rhythms, the bulk of Kyle’s vocals take on a huskier tone bringing everything much closer to early Good Riddance. Given Advocaat’s usual musical flair, this obviously comes at the more melodic end of hardcore and is still enjoyable, but placed in the middle of the EP as it is, it doesn’t quite fit stylistically. ‘Leave’ sets everything back on track by combining big, fuzzy chords and a mid-tempo rhythm to create some fine punk edged rock sounds. Like the opening track, there is more than a trace of Funeral Oration within the vocals but more than before, these fit the more sedate music perfectly. Although this is nowhere near as big on instant gratification, a few plays more than suggests a genuine “grower”, especially since the music has a very broad melodic punk appeal. There’s an unexpected twist during the pre-chorus when the vocal melody drops into ‘Methodone Pretty’ by Manic Street Preachers (probably not intentionally) and a further shift into something punkier for the chorus. Between this track’s three distinctly different moods, it feels really complete, and for those looking for something a little more mature than punk’s typical two minute bangers, it could grow into a favourite.

Outdoing the rest of the EP, though, ‘Crimson Horror’ has the best riff and easily the best chorus. Showing a little more adventure, the arrangement combines an alt-rock vocal with heavy drums at the outset. The verses are angular, but never arty; sharp but melodic and – most importantly – very accessible. By combining this with a brilliant chorus where the Face To Face-esque sound is heard in full flight against a catchy hook and a barrage of whoahs, the duo really show a knack for creating a short, sharp musical package. Between that huge whoah and a repeated vocal line about being sold a “book of lies”, it only takes three or four spins before this number gets lodged in your noggin.

These five songs cover a reasonable amount of pop punk/melodic punk ground in a little over ten minutes. At least three of them have brilliant hooks, either musically or lyrically – and in the case of ‘Crimson Horror’, both. Come for ‘Crimson Horror’, stay for the rest: if it doesn’t click with you after the first couple of plays or you’re not convinced by the untypical vocal for the style, stick with it…you won’t be sorry. A little patience will be its own reward.