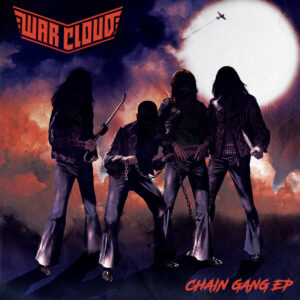 With their 2017 debut release, US metal titans War Cloud championed a very old fashioned style of music.  In tracks like ‘Red Witch’, their debt to the roots of Black Sabbath seemed obvious, while in faster paced material it was easy to trace influence directly back to ‘Stained Class’ era Judas Priest.  What the record lacked in originality, it made up for with musical chops and a lot of enthusiasm.  2019’s ‘State of Shock’ gave the world more of the same, but cranked up the energy.  By chucking in the odd riff borrowed from Diamond Head and Kiss, the band mined classic rock’s rich past a little further with some very retro results.  Understandably, by this point, those who liked War Cloud seemed to really love them.

Although a global pandemic ground the world to a halt in 2020 and put an end to live gigs for the foreseeable future, War Cloud maintained their presence with a pair of releases.  ‘The Earhammer Sessions’ presented choice cuts replayed live in the studio and, although a strong career overview, didn’t really provide much of an alternative to the original recordings, while ‘Chain Gang’ – a two song stop-gap EP – gave fans something more to enjoy while the band considered their next move.

The ‘Chain Gang’ release, in many ways, shows War Cloud at the top of their game.  The title track flaunts several riffs harking back to the denim and leather days of the New Wave of British Heavy Metal and each is played with a real love for the style.  From the opening barrage of twin lead guitars – borrowed lock-stock from Iron Maiden’s ‘Where Eagles Dare’ – through the heavy chugging riff, inspired by Metallica’s mid-tempo riffs (all borrowed from Diamond Head), there’s ample proof that these guys play very well indeed, and in terms of bringing back an audience’s youth, they are able to do so better than most.  Even frontman Alex Wein’s vocals, although a world away from the studs ‘n’ leather wails of the 80s, carry a huge presence via a selection of husky messages.  The ingredients are all great.  It might have been more impressive had War Cloud not just opted for nicking bits of UFO’s ‘Doctor Doctor’ for a core melody and gluing it to a couple of Iron Maiden bits, but settling for what they’ve delivered, at least it’s played with love.  …And despite most of the magpie tendencies (which also include a smidgeon of Priest and the end bit of Metallica’s ‘For Whom The Bell Tolls’ for good measure), there’s no denying that guitarists Alex Wein and Tony Campos (not to be confused with the Static-X/Soulfly/Fear Factory bassist) can really play.  Although this track falls down in the originality stakes, the featured guitar solo is truly immense – several bars of fretboard melting suggests that in War Cloud’s world it is still 1984 and with a bit more twin lead on display, the lead breaks value melody as much as speed and flash.

Joining the band’s original composition is a cover of the old Rock Goddess track ‘Satisfied (Then Crucified) which allows the lads plenty of scope for adding a little extra heaviness to a riff much closer in years to their beloved NWOBHM.  With plenty of rhythmic punch behind them, the twin guitars take on a chuggier sound while energetic lead breaks bring a full compliment of 80s squeals.  Lead vocals are handled more than admirably by guest performer Janiece Gonzalez of Wild Eyes, who attacks the song with a real spirit, often sounding like a gravelly Doro Pesch.  The lads contribute a world of shouty gang vocals and although everything is hugely unfashionable for 2020, the recording session at least sounds like it was fun.

There’s an old saying that suggests everything old is new again, meaning that revivals for a new generation can seem fresh.  That doesn’t really apply here since War Cloud aren’t content with merely recycling an old style for a new audience; with ‘Chain Gang’, they’ve gone the whole hog and lifted huge chunks of a couple of classic rock songs and sort of hoped nobody would notice. By coupling that with a cover of something genuinely from 1983, they really do sound decades out of time.  Still, if you crave a bit of faux nostalgia or your tastes in metal never progressed much past 1989, they’ll definitely still be able to push a lot of the right buttons.  At least they’re able to do all of  this without embarrassment and in a convincing manner…which is more than can be said for their UK equivalent Lawless…