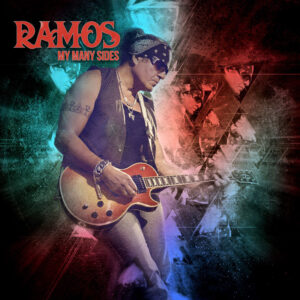 Before its release in the summer of 2020 ‘My Many Sides’ was touted as his first solo album. This means either Josh or the record company have disowned (or forgotten about) ‘Living In The Light’ [Frontiers Records, 2003]. Pedants may point out that, back then, Ramos referred to an eponymously named band rather than just the man himself, but it was promoted as Josh’s solo record by many at that time. This record is slightly different in that Josh isn’t working with a fixed line up. Taking cues from Tony Iommi’s first solo outing and that genuinely excellent Slash record from 2010, he’s chosen to showcase a different vocalist on each track, which not only allows him to adapt his playing accordingly – hence the “many sides” – but also gives the record a broader appeal.

It’s always a pleasure whenever XYZ/Great White man Terry Ilous turns up on a record such as this, and even on occasions when the material isn’t as good as it should be (as with the Bridger album from 2011), his voice can usually be relied upon to hit the spot. Here, on ‘Unbroken’, he sounds like a slightly restrained version of his younger self and with Ramos launching into various sub-Zeppelin and Kingdom Come inspired riffs at full volume, it’s easy to imagine this as an old XYZ track that never was. Striking the right balance between heaviness and melody, Ramos shines throughout but sounds especially confident when it comes to the solo. It’s good to hear him tackling the sort of thing you just wouldn’t find in the middle of a Two Fires disc. The always fantastic Eric Martin is in distinctive voice on the big ballad ‘Forefather’. He might sound slightly more ragged than his younger self, but his approach is a good fit on a tune that mixes AOR tropes with melodies that sound more theatrical. Ramos, meanwhile, indulges in various bluesy fills on a tune that veers towards gospel territory – all very pleasant, but without being challenging. Quite often, you’d expect Eric to be the real star on an album such as this, but he’s swiftly outdone by Harem Scarem/First Signal singer Harry Hess, fronting a slick power ballad that allows his range to move between soulful verses and a huge rock chorus with ease. It’s an interesting arrangement, since Ramos seems happy to take a backseat during the verses, but he more than makes up for that with a ripper of a guitar solo and some fine playing during the closing moments, very much showing how he and Hess are complimentary to each other’s talents. There’s a small drawback in that the production and final mix is nowhere near as slick as something like this deserves to be, but if you’ve bought a lot of Frontiers Records products over the previous few years, you’ll be more than used to that being the case.

Approaching the more grandiose end of the melodic rock scale, ‘Immortal’ takes a little longer to appreciate than most tracks on this album in that it seems a little cut ‘n’ paste, but a few plays shows off a performance with a few strong elements. Most obviously, Josh’s lead work stands out, especially during a moment where he stretches beyond longer, vibrato fuelled sounds and into something more aggressive. Guest singer Tony Harnell isn’t always the most natural companion to Josh’s quieter tones, but once the guitars shift from clean and melodic into something much dirtier on the chorus, it’s easy to hear why the TNT frontman has been given the job. There are times during the rockier parts of this number where he stretches to full siren’s wail – far more than he did on the Lovekillers album from ‘19 – and while its obvious he still has a massive voice, as usual, it won’t be to everyone’s tastes. Turning his hand to massive blues rock chops, Ramos teams up with Joe Bisaha for the chunky ‘Movin’ On’, and while the sometime Babys vocalist isn’t necessarily one of the biggest stars in this particular AOR/melodic rock parade, his performance is certainly larger than most. With Bisaha approximating a melodic roar throughout and the band tapping into sounds that sound like a tougher Tangier or ‘Bag of Bones’ era Europe, there’s an old heart to the song, but at the same time, still plenty of enjoyment to be had if played loudly.

Elsewhere, Tyketto singer Danny Vaughn sounds superb on a Europe/Whitesnake hybrid that shows off a world of tasteful melodies from Ramos; the sadly missed Tony Mills wails on a slightly bluesy workout that might’ve suited Terry Ilous just as well and Ramos turns out some great, vibrato heavy tones on the instrumental ballad ‘Ceremony’. Each one goes a long way to making ‘My Many Sides’ a solid disc. In fact, it’s only with the three numbers teaming Ramos with Heaven & Earth’s Joe Retta that the album begins to feel a bit more “second divison”. Retta is a decent enough singer in his own right, but his tendency to perform everything at full pelt drives the material further towards Frontiers’ Euro bombast than the fine AOR/melodic style of the album’s best tracks. That said, the groove set up during ‘Too Good To Be True’ and the way Retta isn’t exactly shy about launching into his best “Sammy Hagar Impersonator” routine, more than suggests the material does have its own strengths – it just takes longer to appreciate.

Naturally, Josh doesn’t quite have the same clout that allowed Slash to phone several rock legends (and Fergie, who turned in that record’s finest guest spot), but in rounding up a selection of his chums from the Frontiers stable, he offers the kind of album that offers a lot to enjoy from the very first play. Although not perfect, with some decent tunes and great vocal performances, ‘My Many Sides’ is well worth some quality listening time.