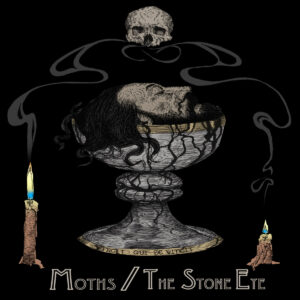 Stoner band Moths have already gained enthusiastic press for their self titled EP showcasing a world of dark riffs and bluesy wails. That release’s heavy reworking of King Crimson’s classic ‘21st Century Schizoid Man’ was a great showcase for vocalist Damaris Rodriguez, whose clean style had a great power on the best tracks, especially when paired with some intensive growls. Further proving themselves a band with a gift for combining heavy riffs with unsettling atmospheres, their ‘Intervention’ carries on from where their earlier EP left off with sounds that, at first, teases with a world of ambient guitar sounds accentuating a dark psychedelic feel. Pretty soon, the music branches out into a world of bluesy metal where warm bass runs and odd jazz metal guitar tones underpin a few stoner riffs. Often more concerned with presence and pace than an accessible melody, it takes a while to adjust, but once Damaris links everything in confident voice the pieces start to fall into place. Even then, it won’t appeal to everyone with its deviations into atonal jazz weirdness, but in terms of kitchen sink arrangements, it feels as if there’s something interesting lurking around every corner. Just don’t expect a song…at least not in the traditional sense. This is…difficult, but Moths more than make up for it later.

The ability to craft an accessible song hasn’t eluded The Stone Eye, whose brilliant ‘The Presence of The Mind’ uses many retro moods to create something quite lovely. Although it sounds at first as if it’ll be a straight stoner workout, it quickly turns into a fine slab of psych with well crafted hard rock undertones. The way the driving riffs underscore layered vocals might remind some listeners of a few recordings within Josh Homme’s musical bubble, there’s just as much love for early Blue Oyster Cult (and by association, twenty first century BOC obsessives The New Death Cult) within this very 70s affair. The phased vocals; the jazzy, noodling guitars; a willingness to forgo extra heaviness for a dreamy, almost psychedelic wavering…each piece shows a band with greater musical interests than most bands thrown into the stoner category, and each is pivotal to this number’s all round brilliance. In terms of hooks, the sound will win over listeners long before any lyrics, since this is very much a mood piece, but if tackled in the right mood, it has every chance of becoming a cult classic.

If there’s any reason to check out this split release, though, it’s for the cover tunes. The chosen selections come with different atmospheres, but both are enjoyable for very different reasons. Moths put their own stamp on the Black Sabbath classic ‘Hand of Doom’ [the best track on the ‘Paranoid’ LP and we’ll happily fight anyone who says otherwise] and although, initially, it seems as if the band are happy to play it completely straight (aside from a more lo-fi recording style), as things progress, it becomes clear they’ve made a few tasteful changes. After a couple of verses of something easily recognised as ‘Hand of Doom’, things take a turn a few minutes in, once the main riff is augmented by an old-style Hammond Organ drone. Moving into the fast section, Moths take every opportunity to make the track their own by injecting a little garage rock energy into their lo-fi stoner style, while Damaris puts in an especially impressive vocal performance, ringing emotion from every line in a way that Ozzy never could. Moving into a lengthy instrumental passage, things change yet again as all Sabbath and stoner undertones are pushed aside for a noodling lead guitar that fuses jazzy influences with a jam band and garage-ish looseness. The way this goes on for so long and goes further off the beaten track, you might even wonder if Moths will ever find their way back. However, the main riff eventually re-emerges heavier than ever, giving this cover another burst of ‘Hand of Doom’s classic melody to bow out, while Damaris taps into a deep croon. ‘Hand of Doom’ is a track that most rock and metal fans have heard a thousand times, but its great when a cover such as this comes along and is able to lend something of a fresh perspective.

Faced with topping that, The Stone Eye turn their hand to the folk standard ‘The Wayfaring Stranger’. Any temptation to heavy it up has been avoided and, instead, the band use the exercise to show off an even broader range of their talents. The chosen vocal mixes folk undertones with a rock-ish edge, which is occasionally reminiscent of 90s lo-fi indie from Ween and their ilk, while a jazz tone to the guitars reinforces the more traditional aspects of the tune. On its own merits, it might seem like something you might listen to a couple of times and move on, but in terms of showing a whole different side to The Stone Eye, it sort of feels…important, if nothing else.

When handled correctly, a great split becomes more than a mere collection filler and this shared recording definitely fits that bill. If you’re already a fan of either act, you know you want this. If you aren’t, head immediately for The Stone Eye’s brilliant ‘The Presence of The Mind’ and lose yourself in its retro psych world and follow that with Moths’ brilliant take on Sabbath for some great listening. If you find yourselves loving everything here, be sure to backtrack to Moths’ self-titled EP and The Stone Eye’s 2018 LP ‘Kevlar, Kryptonite, Gloria’. You won’t be sorry.