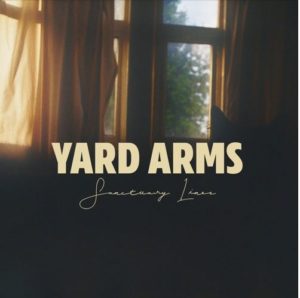 Towards the end of 2019, Yard Arms released ‘A Glossary of Broken Humans and Beating Hearts’, a gloriously downbeat EP featuring indie-pop sounds that drew its main influence from Kitchens of Distinction. The duo would occasionally rise from their gloom to offer something a little more Cure-like in places but, in the main, the music carried a beautifully melancholic sound. It was one of the finest releases of the year.

Their follow up, ‘Sanctuary Lines’ – soundtracking the beginning of Summer 2020 – is a little more upbeat. This is particularly obvious during ‘These Four Walls’, a heavy jangler that applies a Wedding Present influence during the intro, before exploding into a huge pop-rock tune that seems a little more in line with Deaf Havana than the expected Kitchens’ moodiness. Although it doesn’t appear to wallow in the same sadness as some of Yard Arms’ previous, there’s still a strong link via a distinctive vocal. Despite any changes, the band sound really invigorated in their new, more outwardly happy shoes. In fact, Yard Arms sound ready to take on the world, and between a hugely confident vocal and a brilliant rising melody that swells to create a massive hook, ‘These Four Walls’ deserves to be a track taken to heart by all lovers of guitar bands with indie-ish vibes. Although carrying a slightly more contemporary sound at the time of release, this could spark a special relationship with listeners still lamenting the break-up of Gene, since there’s a spirit throughout that hints at a love of that band’s ‘Drawn To The Deep End’. This provides every reason to buy this EP.

The rest of the material is almost as strong, although it seems pointless in trying to pick best tracks since there’s some great stylistic variation. Another spirited tune, ‘Silicone Crowd’ flaunts an indie-pop sound that could easily slot in with New Order during their ‘Republic’ period. With driving bass work powering a jangly groove, it comes with some serious muscle. A mournful vocal brings things back squarely in line with more of the “expected” Yard Arms sound, but again, there’s still a feeling that the band are constantly reaching out; constantly looking to take their core sound into new territory. The lead single ‘Mantra’ shows how well Yard Arms continue to create music with a fine balance between being a voice for aching hearts and being strangely motivational, as a tinkly and bouncy arrangement worthy of Tears For Fears in 1985 springs forth, but as that’s off-set with a dour voice, extant fans will certainly enjoy what they hear. As the number reaches it’s peak with a world of multi-layered guitars, the pure love for alternative sounds of the 80s creates something hugely familiar and inviting. In another change of mood, ‘Fables’ slows down to allow a few Americana tinged guitar lines to sweep across a fine, crooned ballad. Within these four minutes, Noah Villeneuve and Billy Golding sink into a sound world that’s perhaps their most retro of all. With a melody that never sounds a million miles away from The Verve circa ‘Urban Hymns’, it has some strong roots, but it’s when gradually building to a huge climax with a choir of voices that this track really shows its strength. Although not entirely rousing in the traditional sense, the hooks seem big enough to win the hearts of a live audience.

This EP’s songs feel strangely nostalgic the first time you hear them and, in being so, they actually have the makings of something that might become a long-term favourite. In a world of streaming and push-button music, so much stuff doesn’t hold the attention in the way it once did, but there isn’t such a worry here. When played alongside the previous ‘Glossary of Broken Humans…’, these songs sound even better. In just fifteen minutes, ‘Sanctuary Lines’ adds so much gold to Yard Arms’ growing legacy. Simply put, if you consider yourself a fan of classic indie-oriented rock/pop sounds, you can’t afford to miss this.