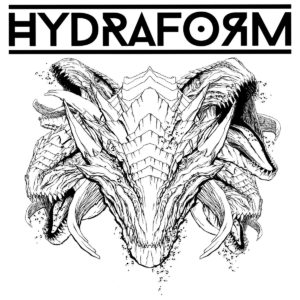 For this Colorado based band, there’s more to progressive metal than shamelessly aping the leather trousered tedium of Dream Theater and the hundreds of copyists that have sprung up since the 90s. On this trio of tunes that make up their second release, you’ll find the obvious speedy soloing and obvious posturing, but you’ll also find influences from a post-grunge dirtiness, traces of gothic metal and eventually a love of groove and even melodic death metal. When you glue all of those together, you end up with something that at least half feels progressive, even if it wouldn’t appeal to those who love “prog”.

‘Born of The Sea’ wastes no time in hitting with a heavy and complex riff, mixing Tool-ish drum parts with staccato rhythms and an incredibly busy guitar part. Although the off-kilter rhythm feels a little forced at first, once you’ve had time to settle in, it’s occasional quirks really give guitarist Jacob Streifer something to work with. This even allows him to remain a huge part of the musical focus once the vocal kicks in. Carter Pashko stokes up the increasing tension with some intensive growls, but balances these with a few more melodic elements within an interesting and full-bodied performance. Those who enjoy math metal but also find themselves going back to a lot of 80s metal for listening pleasure should find a lot to like here. Although Hydroform have set themselves up as sounding like classic Soilwork interspersed with a few more progressive quirks, it’s actually all change for ‘Chained’, a tune that applies a punchy intro to a mid-paced groove, exploring sounds that touch upon Disturbed, before branching out into an odd hybrid of melodic progressive metal, post grunge and groove metal. In terms of accessibility, this is Hydraform’s finest five minutes: the tune swaggers during an impressive verse, crunches through a slightly more obvious attempt at a chorus and tops everything with a dominant lead guitar. If you strip away the layers, there’s a great song here constructed from dark harmonies and half a chorus from the Disturbed school of melody. With all of that in mind, it’s a shame Hydraform insisted on over complicating everything, especially once Streifer insists on hammering out a set arpeggios that sound depressingly similar to his major contribution the previous track.

Finally, the epic ‘Parasite’ introduces sweeping and cinematic piano, suggesting even bigger ideas are afoot. This is all too quickly abandoned in favour of an odd hybrid of post-grunge chunkiness and progressive quirks. A mix of emotive vocals and hardcore shouts lend an immediate texture. This is enjoyable, as is he way the band steers something that’s obviously Tool-esque head first into a much heavier chorus, which suggests a metalcore influence. This shows how Hydraform are at ease when tackling even heavier sounds, but there are even heavier things to come when the number eventually peaks with a jagged but sludgy riff and a few guttural roars. The number’s most interesting musical idea actually links the two halves of the arrangement together when a huge chord progression steers the track into an almost gothic sound. There are at least three brilliant ideas lurking within these seven minutes, although they might have been more effectively used to lend some sheer power to three separate tracks. Given that Hydraform lean towards prog metal whatever they’re doing, that was unlikely to happen, of course…

Although only three songs make up this EP, the tracks feature enough twists and variation for it to feel far longer. Individually, there are often some great ideas here, but when mixed all together into three needlessly complex tracks, it has the potential to leave the listener feeling as if Hydraform’s obvious talents could be used more effectively. That said, if you’re heavily into prog- and math metal, it’s definitely worth hearing. ‘Chained’ and the middle section of ‘Parasite’ are just about strong enough to ensure your listening time is far from wasted.