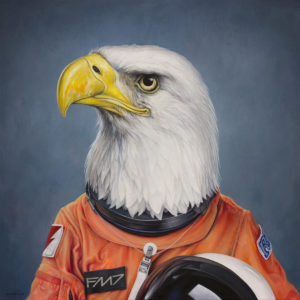 A collaboration between members of Dutch punk bands The Windowsill and Accelerators, Giant Eagles takes both groups’ pop-punk roots, applies slabs of synthesiser and massive power pop choruses to create sounds that show off an almost equal love of Ramonescore and early 80s new wave. Seven years on from their debut, the Eagles’ comeback disc ‘Second Landing’ presents thirty two minutes of near perfection, where catchy as hell choruses mesh with some brilliantly constructed and shamelessly retro tunes.

The least subtle example of the band’s hybrid sound can be heard on the lead single ‘Bloodlust Tonight’ where the synths take on a distinctly brassy sound, making things seem like a blend of Ramonescore and punk ‘n’ roll…at least on first listen. Given time to acclimatise, the Ramones influences shine through brightly and although the accented vocal and infectious hook is clearly the work of Windowsill members, there’s a lot here which feels very different to their “day job”. As the album progresses, it becomes more obvious that Giant Eagles really aren’t shy of an alternative pop chorus. Easily the album’s standout, ‘Evil Robot Nation’ really goes for it in the power pop stakes, with the synths and other new wave-ish sounds battling a tight but melodic guitar riff. You’ll find traces of bands like Shades Apart, but perhaps more than anything, this number manages to really capture the all round appeal of The Go-Go’s reunion disc ‘God Bless…’, even if the final result is slightly punkier. It’s guaranteed that after two or three listens, this has every potential to become a favourite. Likewise, the way ‘Supreme’ blatantly flaunts something akin to an old OMD riff while clinging onto a full compliment of Ramones inspired power chords has a truckload of charm Although its lyrical hook is really simple and potentially one of the album’s best, it’s still no match for the music itself – this really is that good. If the music appeals to you from that all important first listen, it’s guaranteed that the bell-like keyboards and brazenly early 80s bounce will have you reaching for the repeat button.

For those who might find it difficult to tune into the synth-backed sounds of some the poppier tunes, there are a few songs along the way that revert to the musicians’ punky stock for your entertainment. ‘My Wish Is Your Command’ gives the album a small slice of pure Ramonescore on a tune that sounds like Dan Vapid & The Cheats with a Dutch accent; ‘Lost My Heart Overseas’ could be a pop-fuelled Apers classic, with everything drawing further from straight Ramonescore in the main, but with a subtler keyboard accompaniment during an instrumental break, before ‘Anaconda’ brings more straight up no-nonsense melodic punk. Another fine tune, makes a bigger feature of a great harmony on the chorus and also allows a great rhythm section more room in the final mix. The bass playing is superb and used to brilliant effect when introducing each verse and a heavier drum sound gives this all too brief eighty seven seconds a genuine weight that the rest of the album (great as it is) doesn’t always have.

Perhaps the most perfect example of Giant Eagles’ sound, ‘Out of Love’ is hugely melodic. Its love for a riff comes across in an instant, with the almost legendary ex-Apers guitarist Maren Nicotine doing his best to tap into something Dan Vapid would be proud of, while a few tinkly keys are on hand to remind you that this is far more than just your average identikit pop-punk. Somewhere in between the album’s two styles, ‘Zombie Apocalypse’ is a perfect hybrid. The jagged guitars call back to Apers and Dan Vapid Records; the lead guitars adopt a twang that brings the arrangement a little closer to punk ‘n’ roll grittiness, and – finally – during a throwaway chorus, a blanket of synths makes everything seem as if Tubeway Army have had a massive influence during the writing process. If you’ve been attracted to any Giant Eagles tunes in the past (or, indeed, earlier on this fine long-player), you’ll love this. In closing, the slightly slower and slightly meatier ‘Put One In The Chamber’ stokes up the guitars but still keeps a firm grasp on a big, simple hook. The track’s use of a hefty twang from the lead guitars lends the main melody a similar retro mood to ‘Zombie Apocalypse’, but sounds quite different thanks to a heavily rhythmic approach. It’s a rather downbeat end, but shows how the musicians are capable of flexing just a little more musical muscle.

The presence of Gary Numan and OMD-ish synths on the bulk of the LP is something that mightn’t always sit well with the less adventurous punk fan, but there’s no mistaking this record’s riffs and sugary hooks have the making of a genuine classic. An album that really shouldn’t be missed by anyone who loves good, strong melodic pop punk, ‘Second Landing’ is effortlessly cool. Grab it as soon as possible.