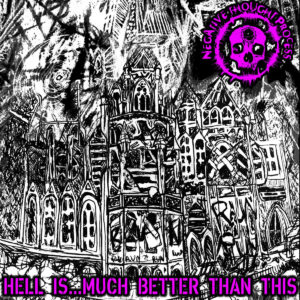 The title cut makes their angry stance abundantly clear, though doesn’t do so in the expected grindcore or crust punk way. Instead, the tune – and in the heaviest sense, it is a tune – opts for a different kind of sledgehammer approach. First, the trio launch into an intensive doom riff, stretching it out for what feels like forever, even though the reality is just a few bars. With the heaviness established, the speed is increased slightly and the last twenty seconds demonstrates a mean hardcore crunch. Topped with a guttural roar of a voice, it represents a minute that’s full of menace. A defining moment, ‘I Am Scum’ kicks off with a severely downtuned hardcore riff, quickly dropping into a tune that sounds like a cross between something from Agnostic Front’s earliest years, reworked by prime Biohazard, before making a leap into something even more intense. At the point you’ve started to really enjoy NTP’s really aggressive hardcore sound, the tempo speeds up and the drums lock down an insanely pneumatic riff. Moving from hardcore into a Napalm Death infused grindcore classic, this is a track that manages to touch upon at least three different (and equally brilliant) hardcore punk and extreme metal traits, showing Negative Thought Process to be excellent musicians within their chosen style. In just a minute and a quarter, they truly lay the foundations for a fearsome sound.

Moving into ‘Cognitive Dissonance’, the grindcore elements intensify further, with drummer Jordan Allard absolutely hammering at his ride cymbal, before dropping a few rhythmic quirks into what could’ve otherwise been an identikit piece of grind. In a few seconds, the tightness within the arrangement suggests it’ll be this EP’s highlight, but that hunch is confirmed once NTP make the switch to a heavy sound that’s a little closer to early Helmet than Napalm Death, Redbait or Discharge. In terms of basic riffs, this is a genuine beast and the way Kyle Townsend wrings his bass strings for a full on sludgy sound gives the arrangement a fantastic bottom end. With everything coming an abrupt halt after just seventy one seconds, there’s a possibility of feeling short changed, but with ‘Stagnant’ offering a brilliantly crusty sound, dual vocal and a speaker-breaking intensity, it’s basically only about eight seconds before you’ve got completely swept up in their next burst of anger. …And with this track opting for a purer hardcore vibe throughout, it’s a genuine treat for lovers of a heavy riff.

The final pairing of ‘Festering In Ignorance’ and ‘Force Fed Lies’ cements the band’s two or three main influences into a double whammy of crusty skull-pounding, opting for a more rhythmic approach on both numbers, showing off some great abilities with an intensive riff. ‘Festering’ may not bring anything new to this release, but it’s grind-oriented sound remains very appealing, before ‘Force Fed Lies’ delivers some pure hardcore thrills that centre around a couple of slower riffs that recall Sick of It All’s ‘It’s Clobbering Time’. While there will always be a few listeners who’ll dislike the slightly slower mood, in terms of riffs, this presents some near timeless hardcore, giving these lads their own mosh pit classic in the process.

With material that’s angry and carries a social conscience (although possibly less political than the absolutely seething Redbait) and far less silly than Alpha-O-Maga (in fact, not silly at all) ‘Hell Is…’ seems to do more than just document a moment; it clearly aims to be a recording that grindcore, crust and hardcore fans can enjoy in the longer term. Obviously, this won’t be for everyone, but for lovers of early 90s grindcore and the most aggressive, metal-fuelled end of the hardcore spectrum, these ten minutes will bring a selection of riffs that truly impress.