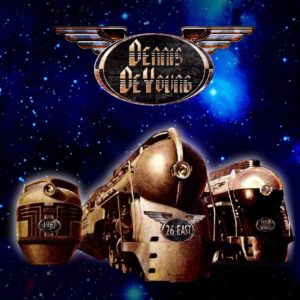 As befitting a tale stretching across so many years, most of the pieces of music on ’26 East: Volume 1′ take on a different style and mood, but they’re all linked by two very obvious things. Firstly, there’s DeYoung’s voice – thankfully, it’s almost as strong as it was in 1979 and still recognisable within seconds – and secondly, there’s the fact that, naturally, DeYoung’s life story is told as if it were a piece of stage theatre; the musical aspect of the arrangements makes any tonal shifts between the story’s chapters seem a little more natural. In Jim Peterik – a man who doesn’t always understand that “less is more” – DeYoung has found the perfect arranger for his self-centric tale. ’26 East’ very much comes across like bits of old Styx records and old time musical plays and, regardless of whether you like the style, from a technical perspective, it’s done brilliantly. If the idea of Den ‘n’ Jimmy “doing the show right here” brings you out in a rash, there are chunks of this project that are best avoided. At best, you’ll find a few things that’ll make you hanker after those Styx vinyls you’ve not spun in a while; at worst, DeYoung’s hugely theatrical tendencies could be a massive barrier to long term enjoyment. Even at it’s very worst, though, you can rest assured that none of ’26 East: Volume 1′ is as bad – or as embarrassing – as Morse’s vanity project based on the life of Christ.

‘East of Midnight’, beginning our guided tour through the life of Dennis, starts with such a huge fanfare, you’d wonder if it actually had anywhere else to go after the first thirty seconds. Obviously, this has the plus point of making the record open in a most Styx-like way. Dropping into the first verse, a pulsing rhythm sets a great pace, while DeYoung’s big voice calls out with clarity. For lovers of albums like ‘Pieces of Eight’ and ‘Paradise Theatre’, it will feel like the return of an old friend. Stoking up a choir of vocals for a chorus reflecting upon magic heard from the radio, it grows into a pomp-tastic tune, almost an equal of Styx’s very best. The instrumental interlude is especially impressive, with the hired band almost sounding as if they’re covering ‘Black Moon’ era Emerson, Lake and Palmer. Yup, ’26 East’ starts in a really grand fashion.

From such strong beginnings, it quickly dives off a cliff in terms of taste. ‘With All Due Respect’ shifts the mood to something much rockier, but a great tune is utterly ruined by terrible lyrics. Mentions of “fake news” bring us squarely into the present at the time of recording and mentions of red versus blue lend another sledgehammer clue that this might be DeYoung’s political anthem for 2020. The theatrical bent is still in force, something that comes across with both Dennis’s chosen style and the placement of some shrieking backing vocals. A great tune is spoilt by a heavy handed lyric where Dennis pours scorn upon someone – presumably Donald Trump – mocking a man “surrounded by Barbie dolls”, a man whom “with all due respect [is] just an asshole”. While he certainly isn’t wrong, it doesn’t always translate into something you’d want to listen to for sheer enjoyment. Thankfully, any attempts to make this seem like a crass (though accurate) novelty are balanced out by a fine guitar solo and a strong vocal melody throughout. That chorus, though… That chorus grates right from first play, even though the figure within the piece is “an asshole”.

Taking mechanical rhythms and bell-like keys, ‘A Kingdom Ablaze’ offers some fine AOR with pop-ish edges. The quieter influences are certainly welcome even if there’s still a feeling that it could all explode into something grandiose at any second. While the vocal is the main feature throughout, early listens highlight some great guitar work. A huge chorus boosts the expected theatrical elements, but these are far less “show tune” than they could be thanks to a chunky riff, and with everything considered, this quickly becomes the album’s best track. It’s a good thing that it helps to build up a lot of enthusiasm on the part of the Styx fan, as ‘You My Love’ – the first big ballad – is genuinely horrible. In terms of adjectives, “syrupy” doesn’t begin to cover it. It’s the kind of number that makes the Styx mega-hit ‘Babe’ sound like a mean rocker. The bones of the melody are clearly designed to invoke memories of ‘Babe’ and the late 70s, of course, and the way the electric piano sounds combine with DeYoung’s huge voice certainly stir up those retro emotions. Unfortunately, with so many decades now gone and the record buying public’s tastes having changed, this isn’t so much “acceptable AM radio hit” as “substandard Disney tear-jerker”. For those who aren’t partial to musicals – animated or otherwise – one listen will be more than adequate.

‘Run For The Roses’ is far better when it comes to a big show-piece, in that its ‘Babe’ core meets bits and pieces that sound like things culled from ‘Grand Illusion’ album. DeYoung is in full flow, clearly enjoying the performance. With everything impeccably arranged, it deserves a place among the album’s highlights. Peterik’s gifts for grand AOR come through at almost every turn, but it’s grandiosity still makes it a mood piece…and unless your mood is “somewhere off-Broadway”, then it mightn’t necessarily do it for you every time, regardless of how well put together it is. For the AOR buff, the rattling and rhythmic ‘Damn That Dream’ presents a much stronger proposition, in that it’s a track that’s much less reliant on being in the right mood and more concerned with applying a great riff to a strong vocal melody. The stomping rhythms that build up to the chorus carry a very strong 70s sound and, in fact, if it weren’t for this releases production sound, you might even believe this came from the Styx vaults. It’s great – not necessarily every day listening, but it’s another track that helps show off this album’s obvious strengths, both musically and vocally. Likewise, the fusion of theatrics, 70s pomp and 80s AOR shines brightly throughout ‘Unbroken’, a track that seems to value a little more simplicity. The more melodic touch allows for some unexpected bluesy guitar fills, while a multi-layered chorus hook gives another reminder of the performer’s Styx heyday. Granted, this doesn’t push the envelope for anyone concerned, but it’s a pleasing slab of melodic rock, made all the better by the kind of hook that has half a chance of being memorable.

‘The Promise of The Land’ shifts everything back to “acquired taste” with another musical theatre style overture, but soon improves via a few hard rock riffs, squirly keyboards and a general love of huge 70s rock chops. It’s stopped from rivalling a couple of the earlier tunes for all round greatness, though, when Dennis really goes for it vocally. There are times during these five minutes where he sounds like he’s convinced he’s written himself into a production of Joseph and The Amazing Technicolour Dreamcoat and while this is likely another callback to his Styx prime, it’s a bit more Lloyd-Webber/Tim Rice than Tommy Shaw & James Young. It’s interesting to a point, of course, but also quite wearing, while ‘To The Good Old Days’ makes no concession to a rock audience whatsoever. Pure stage musical, it’s self-congratulatory attitude comes across as smug. This might work in context of the whole record if it were a little more original, but it actually sounds more like a half-cocked rip off of a couple of old ABBA tunes… ABBA had times when they were great, but ‘Happy New Year’ – which this most resembles in a few places – wasn’t among them.

In a predictable move – and one that certainly isn’t unwelcome – DeYoung revisits the musical theme from Styx’s ‘Paradise Theatre’ (specifically ‘A.D. 1928’) for this volume’s coda, ‘A.D. 2020’. Taking the old piano and voice arrangement, he lifts the old tune lock stock and bids us goodbye. It seems a little premature since there’s a second volume, but in terms of closing this disc, it’s a short blast from the past that’ll bring both a comfort and familiarity for many long time fans.

In fairness, when ’26 East: Volume 1′ is good, it’s very good. DeYoung’s voice is almost above criticism – he sounds so much better than most other performers of his generation – and a proportion of the huge musical theatre that’s been painstakingly arranged by ex-Survivor man Jim Peterik is certainly impressive for the style. However, when this record is bad – as with ‘With All Due Respect’ and the sub-Disney sickliness of ‘You My Love’ – it borders on the terrible. Huge Styx fans will find enough gold to make it worth hearing, but they should prepare for something with maddening inconsistencies.

This album is a lot of things, not least of all incredibly uneven…but then again, assuming this is as autobiographical as DeYoung claims, it’s worth remembering that life is never the smoothest of rides.

Read a review of Styx’s 1973 release ‘The Serpent Is Rising’ (an album DeYoung once called “the worst album ever made”) here.