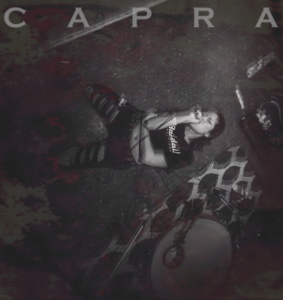 At the beginning of 2020, Capra only had one release behind them, but that was already enough for the band to have shared stages with hardcore champions Today Is The Day and sludge/doom legends Eye Hate God. Their ‘Unholy Gallows’ single showed them to be a hardcore tour de force; a band capable of mixing metallic riffs with the kind of punk-oriented intensities you’d find on a World of Pain or Gallows disc. They already sounded like they were heading for a great future.

Their second release – a self-titled affair – marks a huge change for the band in that it signifies the arrival of new vocalist Crow Lotus on a studio recording. This might not be a change that’s welcomed by the more narrow-minded and conservative listener, but in some ways it’s definitely a change for the better in that it makes Capra sound a little different to your average hardcore act. Her abrasive style literally takes two seconds to make its presence felt during ‘Torture Ship’ and to make a mark on the band’s sound. More impressively, she manages to convey anger without resorting to any of the typical throatiness that would so often dominate this kind of crossover hardcore. Her voice is youthful and fierce, but above all, it’s really clean: every lyric, every potential t-shirt slogan, every barbed message, every howl of anger is there for all to hear. Musically, the band are especially on point as they deliver a selection of riffs that carry influence from lots of great bands at the more metallic end of the hardcore spectrum, but specifically, the repeated ascending riff used during the intro and coda actually creates as big a hook as any of the lyrical content. Most impressively, during the number’s second half, everything slows down to introduce a massive, sludgy grind without losing too much of the hardcore intent, and the heavy music’s contrast with Crow’s intermittent shouting creates an incredible force. “Your future is now!” she opines over and over – a basic message that’ll win new ears quickly and certainly help this to become a cult classic.

Opting for something with far more of a groove at first, ‘Paper Tongues’ is a great showcase for guitarist Tyler Harper, showing how easily he shifts between dirty metallic tones and the nuts and bolts of a classic hardcore crossover sound. For those who love a good dose of metal with their punk, there’s so much to love here – especially with an unexpected shift into speed driven pneumatics along the way. Lyrically, angry concerns that peak with the sentiment “I’ve learned to forgive, but will never learn to forget” appear to draw from far more of a hardcore punk attitude – something reinforced by Crow’s abrasive shouts throughout – and once everything makes a final shift towards something that carries a few hints of Cancer Bats, this becomes another great track that squeezes a huge variety out of its allotted four minutes.

In just two tracks, this release from Capra presents a real game changer for DIY hardcore. They make the marriage of riffs and emotive messages seem so easy and also show a gift for taking the familiar and making it feel just as exciting as your first taste of crossover hardcore. More material would have certainly been welcomed (and especially during a pivotal time for the band), but this pair of angry musical statements are definitely worth the cost of a download. Highly recommended.