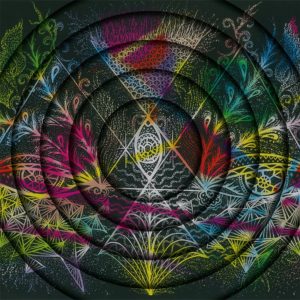 The eight minute opener doesn’t break things in especially gently as it’s very slow and oppressive, but in some ways, it’s obvious nods to the mighty Black Sabbath via a massive doom riff and clanging cymbal during the intro almost feel like a doom metal comfort blanket. Reaching the main riff, things speed up slightly and the distortion goes firmly into the red, with the riffs actually breaking up at the point of emergence. So far so good, but the introduction of the vocal makes the track even better, as it reinforces BlackLab’s origins, never being shy of applying a Shonen Knife-ish vocal to something that would typically require a guttural roar or demonic croon. This sheer contrast between clean yelping and musical force will always seem oddly fascinating from a western perspective, but it’s something this duo uses very much to their advantage. Moving further into this epic, you’ll find a few more typical throaty roars against an even doomier sound, before the women take the riff in hand and crank the speed gradually until reaching a point where they sound as if they’ll burst. If you’re hearing this as your first BlackLab experience, you almost have every right to be afraid, but assuming you’re not about to run for the hills in terror, ‘Abyss’ is an album with so many more treats ready and waiting to abuse your lugs.

‘Fade & Melt’ presents a few Japanese chants and occultish rattles ahead of a Boris-meets-Melvins sludge riff which carries five minutes in a classic style. Although feeling a little like a throwback to ‘Under Strawberry Moons’ it’s no less enjoyable for it’s familiarity, especially once Yuko (gtr/vox) trades in the traditional vocals for several husky growls. In terms of riff/vocal contrast, this is a real standout, but even if it were instrumental, it would still be one of the record’s finest slabs of noise, thanks to a fantastic sludgy groove used to great effect throughout. ‘Weed Dream’ lends some respite from the sludge by injecting a fair amount of speed, allowing the listener a great opportunity to (re)discover how brilliantly Yuko and Chia (drums) lock down a genuine stoner groove of the Fu Manchu/Orange Goblin variety. Granted, its broader appeal is curtailed by a recording so distorted the guitars sound broken and the drums are half buried under the resulting swamp of noise, but therein lies most of the BlackLab appeal. Hitting the final bars, and as the groove slows a little against a wordless, haunting wail, there’s no doubt that this is both ‘Abyss’s stand-out track and quite possibly the finest five minutes in the BlackLab catalogue to date.

Having truly warmed up, the subtly titled ‘Amusement Park of Terror’ grinds in an especially furious way. Initially presenting a thin, almost shreddy sound, the track first teases the listener into thinking that they might experience BlackLab’s own twist on surf rock, but soon enough the distortion takes over and the riffs slow to a repetitious sludge. With only a brief three minutes to work this soundscape, it’s all rather minimal, but for a few keyboard noises lending a sci-fi edge. Although an early fade out suggests this has been designed to be enjoyed as a standalone interlude, it actually works well as a lead in for the album’s chosen single ‘Forked Road’, a break-neck riffer that comes across like BlackLab have been inspired by a couple of old Motorhead bangers. The use of jagged riffs sets it apart from everything that’s gone before, but a slower bluesier interlude is on hand to remind you that the “traditional” BlackLab aren’t so far away. This is brilliant – if you’ve ever wondered what an old Motorhead tune might sound like if it were covered by Boris and had a female vocal applied…then wonder no more! Along with ‘Weed Dream’, this track provides every reason why you need this album.

Pulling towards the end of the disc, BlackLab show no signs of lightening up, with ‘Chained’ fusing the duo’s usual distortion with a confident and almost bluesy swagger, showing how their extreme heaviness is surprisingly malleable, before opting for something spikier. During the intro, there’s an undercurrent that owes a debt to Tony Iommi circa 1973, despite being reworked like one of Boris’ ugly experiments, while various off-key vocals have the unwitting ability to recall L7. At the end of it all, it’s the riffs that are most important and in terms of doom-blues, this is a genuine cracker and by the time a shrill lead guitar pierces through the wall of noise, BlackLab sound…unstoppable. The final pairing – and deliberate juxtaposition – of ‘Sleepless Night’ and ‘Sun’ actually broadens the musical palate, with the former applying tribal drums to drive something that’s closer to garage rock than sludge metal. In fact, ‘Sleepless Night’ shows unexpected musical restraint: yes, it’s all still as distorted as fuck and brilliantly intense, but it introduces a new element to the BlackLab arsenal of noise once Yuko’s spirited vocals seem to dance between riffs that sound more like a mangled version of The Detroit Cobras than any of the usual BlackLab fare. The resulting tune is both inspiring and almost danceable…and all without any real commercial potential! It doesn’t last, of course: after a couple of minutes, a slow and Melvins-esque sludge riff steers the track slowly towards it’s inevitable death, before the insanely heavy ‘Sun’ fills seven minutes with a repetitious riff that dares to blend sludge metal traditions with a black metal inspired husk of a vocal. In closing, BlackLab appear to offer their most marginal tune. A clean vocal with another occultish lilt comes to the rescue during what passes as a chorus, but it’s merely a token gesture before the screeching sounds return. With the vocal alternating, this is quite unsettling – and the album definitely offers more enjoyable material in the lead up to this oddity – but there’s no mistaking the sheer intensity of the riffs as five minutes of sludge reinforces the band’s claim to the Japanese occult-sludge crown.

Despite only clocking in at forty one minutes, the sheer intensity of ‘Abyss’ makes it feel longer. The album’s opinion-dividing approach to vocals and a love of sheer distortion over melody ensures it is the very epitome of “cult” at almost every turn. When approached as a whole piece, it’s tiring and it’s intense. You could even call it ugly.

It’s also bloody marvellous. It’s very much an equal to ‘Under The Strawberry Moon‘ and everything you’d hope a BlackLab album would be. If you own the previous album, you shouldn’t delay in adding this one to your collection.