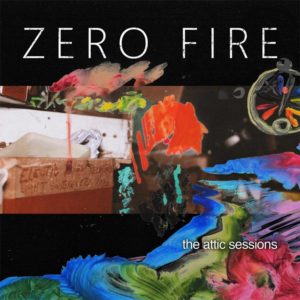 Canadian metal band Zero Fire’s second EP ‘Second Sun’ was packed with great riffs. By creating a brand of melodic metalcore that also included nods to groove metal and contrasted its heaviness with use of clean vocals, it managed to be very broad in appeal. A year on, ‘The Attic Sessions’ offers fans and newcomers a couple of live recordings that demonstrate both extremes of the band’s sound. While a new studio recording would have been preferable – and a full length album better still – this EP has the benefit of giving a premier to a pair of previously unrecorded tracks.

The heavier of the two numbers and the more “traditionally sounding Zero Fire tune” of this release, ‘Ego Id Suicide’ is driven by a riff that could’ve come straight from the mighty Godsmack. It grumbles and grooves throughout and although the no frills recording really dulls the edges (especially with regard to the drums), you can still tell how much it swaggers. In contrast, stripped of studio filtering, frontman Graham King’s voice really comes through. By the time the lead guitar break appears, there’s a sense of the band even leaning towards something a touch bluesier, but it isn’t to be. This tune continues to be about the all round heaviness and ackling the riff and the chorus one last time Zero Fire crank the gears and the speed to demonstrate a kind of crushing sound that’d really get the front rows of an audience in a sweat. If you enjoyed ‘Second Sun’, there’s plenty here to enjoy.

The stronger of the pair, ‘Deltre’ values a little more atmosphere by opening with a world of vaguely proggy influences. Echoing guitar sounds drift from the left speaker channel while sci-fi tinged noises clutter the right. No clue is given as to where things are headed…and then a huge, heavy chord comes in and it starts to make sense. Using the bass in more of a lead fashion, Mike Myszkowski demonstrates a style that is both melodic and inventive and the way he underscores the unfussy slabs of guitar work really makes the track. No attempt has been made to disguise a love for Ashes Divide and A Perfect Circle – this is very much a number that should entertain lovers of both bands – but King’s higher registers lends some continuity with previous Zero Fire works, meaning it isn’t so much a complete surprise. It could even represent the beginnings of a fine new direction. Bringing in a heavy metalcore influence near the end of the number gives a much better sense of musical progression beyond ambling prog overtones, making this a piece that features most of the band’s best sounds inside of six minutes. Although much less direct than most of ‘Second Sun’s material, it’s great to hear the band branching out – and this might even attract some different ears.

The only real issue with this release is the length: although promoted as an EP, a two track offering brings this much more in line with a traditional single, so any suggestion that this is “an EP” is certainly up for debate. The songs themselves are great – a couple of fine additions to the Zero Fire oeuvre that show off the band’s scope more than admirably. For those whom constantly crave huge riffs and even bigger grooves, at least half of this will more than please…and for those who love a more atmospheric brand of hard rock, the other has that covered. It’s short and occasionally sounds like it could be a split between two bands, but it’s great, nonetheless…and if it inspires people to hear the Zero Fire material they’ve previously missed, then its work is done. Recommended.