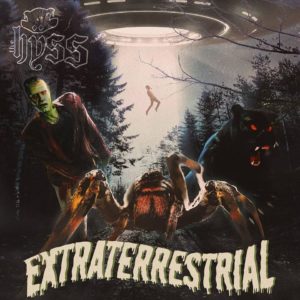 Although quite heavy, the title track kicks things off with a riff that sounds more like a throw back to the heady days of glam rock than anything of a more typical stoner persuasion. It’s still played with a truck-like heaviness, so the band’s true musical roots still lurk beneath. Frontman Matt McDonald adds an oppressively angry vocal which adds to the intensity and while his voice is the kind that won’t always please everyone, there’s something in his shamelessly gruff delivery that really compliments the riff. It only takes about a minute before The Hÿss have won you over…or not. Chorus-wise, things don’t seem quite so impressive at first, with various shouts of “Extraterrestrial” being allowed to carry most of the weight, but then again, this isn’t about boundary pushing or genre-bending – The Hÿss merely want to bring you a good time…and there’s plenty here to do that. A quick mention of Misfits’ ‘Teenagers From Mars’ really taps into the band’s love of b-movie inspired trash before, in closing, a slower, more stoner-oriented riff takes up the mantle and McDonald preaches about “space music, man!” over and over, pulling the listener further into the band’s world of brilliantly retro obsessions. It’s firmly aimed at lovers of trashy rock, but if you consider yourself a fan of such things, this should more than appeal.

A real highlight, ‘Disco Frankenstein’ takes a shift into slower, sludgier riffs which are effective in powering a simple chorus. Even if the end results resemble a hundred things you’ve heard before, the band’s inject a real power into each doomy chug, lending a darkness that’s in contrast with a silly hook. It’s when speeding up this track really comes into its own, though, making time for a boogie-laden instrumental section that sounds like something inspired by an archive Deep Purple live show, complete with swathes of Hammond organ to flesh out the sound. By effectively stitching together three distinctly different pieces of music to create a whole, this is indeed a Frankenstein creation in itself (perhaps that’s what inspired the lyric?) but it really works. It works so well, you’ll have to forgive the band for making the old faux pas of thinking the stitched together monster-man is Frankenstein, as opposed to his creator…

Taking a dirty riff for a base, ‘Wolf Spider’ cranks a hefty slab of noise that falls somewhere between hard rock, punk ‘n’ roll and something a touch more metallic. There’s a real dirtiness at play and a sledgehammer approach to the groove that makes everything sound like an unholy missing link between Biohazard and The Black Halos, which – assuming you love the gritty style – makes for great listening. Factor in a really old school guitar break that occasionally sounds like one of Slash’s early 90s belters reworked by a CBGB’s hand and you have a rock ‘n’ roll cocktail that’s pretty potent. ‘Panther Slide’, on the other hand, is a bit of a mess. Matt shouts with intent, but doesn’t always seem to have such a clear goal in mind; a weird interlude even makes him sound as if he’ll break into some antiquated rap-metal en route and there’s no hook to speak of. Musically, the usual hardcore-meets-punk ‘n’ roll tropes and a few hefty lead guitars are firmly in place, as is a slow instrumental section ushering in the kind of guitar tones you might find on a more typical stoner recording, but beyond that, it just inspire more than one or two listens. It’s definitely the weak link here. The much stronger ‘In Shadows’ works a speed driven hard rock with a few hardcore flourishes and provides the release’s most intense tune. The increase in pace also brings an especially intrusive vocal, but for those who aren’t always sure of Matt’s voice, there’s still hope with Dave Fitzgerald and Pat Kennedy turning in a couple of absolutely cracking solos. If the actual song doesn’t leave a lasting impression – and compared to ‘Disco Frankenstein’ it likely won’t – there’ll be enough musical entertainment to see this through.

It’s probably fair to say that within these intensive twenty minutes you’ll be thrilled by The Hÿss and their self-made and particularly shouty world of sci-fi obsessions, or find it all a bit silly. However, there’s no doubt that whatever you think, the band give will give zero fucks. That really comes across with their chosen style at almost every turn. When the material’s great, this band sounds great…and even when things don’t work entirely, the musical arrangements almost always lend a good insight into how well everyone can play. Whether the material is good or bad almost seems irrelevant at times, since The Hÿss always aim to give lovers of an intense riff plenty to their ears around. …And on that score alone, you can consider ‘Extraterrestrial’ a success!