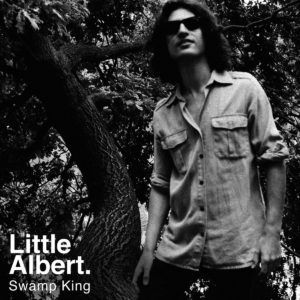 Not to be confused with the Hong Kong rap artist who released his fourth album ‘2019’ at the beginning of 2020, this Little Albert is a project helmed by Albert Piccolo, a musician best known for fronting Italian doom metal act Messa. Albert takes a sidestep from the heaviness for his first recording as “Little Albert”, choosing instead to apply lots of dark and fuzzy guitar to six pieces of dirty blues music.

The title track flaunts a live in the studio sound as a thudding bass underscores a mournful lead guitar. Within seconds, Albert and his trio lose themselves in a world of classic sounding electric blues and although the lead guitar work provides an obvious highlight, the track isn’t shy in offering some other great qualities. The general mood of the track borrows heavily from a trio of blues-rock greats: you’ll hear elements of Hendrix in the dominant lead guitar work – the aforementioned solo is a genuine scorcher; there are echoes of Gary Moore channelling Peter Green in the moody verse and traces of Jeff Healey for the underlying sorrow throughout. Balancing out the grit, layered female backing vocals add a sweetness to an otherwise raw sound. Obviously, this is a great start.

Showing how he is perhaps more versed in blues-rock than those musicians and fans who begin their journey with Hendrix and end not far after, Piccolo turns in a really masterful take of Robin Trower’s ‘Bridge of Sighs’ from 1974. This is a recording where some of his fuzzier traits really come into their own, as his guitar work creates a massive sound from the right speaker channel throughout, with the wavering edge of the main riff sounding as if it’s emerging from a broken amp. Vocally, things are incredibly sharp; for a man who’s devoted so much time to doom metal in the past, his voice has a genuinely rich feel for the blues and although some distortion is applied, his performance retains more than enough of a natural cry to make the track feel suitably emotive. This is a nice reminder of Trower’s sometime overlooked work following his departure from Procol Harum and Albert wisely decides against making any other huge changes, for this is a moody enough track that speaks for itself. If there’s anyone discovering this magnificent number for the first time thanks to this recording, his work is done.

With an opening and a verse that’s loaded with a swing rhythm, the instrumental ‘Blues Asteroid’ gives the rhythm section (Christian Guidolin on bass and Mattia Zambon on drums) a little more room to move, before the track drops into a seriously heavy crunch that pulls the focus off the blues and offers a full (but brief) return to the core of Albert’s beloved Sabbath/doom sounds. For those not interested in metal, thankfully this heavy excursion is merely an interlude and following a return to the pleasing bluesy swing, the lead guitar work flows marvellously. This is the kind of track that could’ve easily spawned a ten minute jam, but as it stands, it’s still very effective. Less interesting, ‘Mean Old Woman’ rarely rises beyond a basic blues rock trudge, but still shows off some smart lead guitar. In isolation, it really isn’t a bad track; it’s more a case of the EP featuring far better material elsewhere, while the superior ‘Mary Claire’ revisits some of the quieter moments of ‘Swamp King’ and stretches them as far as possible. Automatically more compelling than ‘Mean Old Woman’, this tune quickly forges a backdrop from which Guidolin’s bass can occasionally indulge in a few more complex leads, but for most, it’ll be Albert’s lead guitar work that will leave the lasting impression. The way he uses effects here to create a more psychedelic take on the blues makes this sound just different enough from the previous material to hold interest. Building to a rockier climax, the band excels as a genuine power trio and the trippy harmony vocals are also a nice touch. At the start of the EP, few would expect that it’d eventually end up somewhere in the region of “Jerry Cantrell plays swampy blues rock”, but here it is – and it’s a genuine treat.

Best of all, though, this short collection finishes with a romp through ‘Outside Woman Blues’, a track first recorded by Blind Joe Reynolds in 1929. Best known to most in a devastating Cream recording from 1968, Albert’s rendition takes a different mood as he slows it down a little, choosing instead to drop listeners into the middle of something much closer to Hendrix’s ‘Red House’ or ‘Voodoo Chile’. With a classic sounding guitar riff powering through some meaty blues runs and a pre-chorus throwing out a dirty chug, it quickly asserts itself as a great workout. The featured guitar solo is marvellously played – nothing flashy, but in terms of feel and tone it gives the overrated Joe Bonamassa a thing or three to think about – and the vocal’s smoothness lends a great melodic contrast to the fuzzier sounding music. This is a fantastic recording…and that’s before taking on board Albert’s cheeky inclusion of the opening riff from Blind Faith’s ‘Had To Cry Today’, as if to acknowledge – like most people – he arrived at this song by listening to early Clapton works.

In the main, this release is brilliant. Even its weakest track shows a power trio in great shape, while its essential tunes show how three great musicians can really lose themselves in a moment. For lovers of psychedelic late 60s and early 70s heavy blues and fans of a darker, dirty blues groove, this DIY disc is a real thrill. You might never hear ‘Outside Woman Blues’ in quite the same way again…