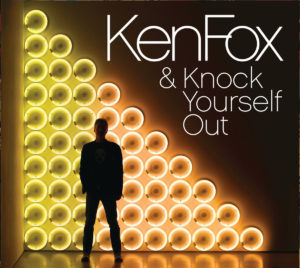 Best known as a member of Fleshtones, Ken Fox tackles retro sounds of a slightly different persuasion on his 2020 EP ‘Ken Fox And Knock Yourself Out’. Taking a pinch of 70s glam, a touch of rock ‘n’ roll, a whole world of 80s power pop and Kurt Baker‘s ability to summon good times, these five songs whip up a rock and pop storm almost guaranteed to please a wide cross section of garage rock and power pop fans.

Chosen as the lead single, ‘One Less Step’ kicks off the EP with a classic sounding power pop riff and a sound that takes listeners back to the late 70s. With influences from The Knack and Shoes running through the centre, it’s one of those numbers that sounds like an old classic straight away. Huge backing vocals provide an important melodic counterpoint against Fox’s more new wave inflected lead, but with everything combined, it sounds great. With an angry, angular guitar solo thrown in, everything is set a little off kilter but this only draws a slightly closer parallel with some of the darker Fleshtones material. There’s a lot of cool stuff wedged into these three minutes – a couple of listens will be enough for fans to love what they hear. Following a squall of feedback, ‘Let’s Go’ quickly blooms into a heavy glam-punk stomper. It’s a number that delivers as much on a hugely rousing chorus as it does on a hard rhythmic verse, creating a trashy party anthem with ease. With his warbling lead vocal in full effect, Ken sounds like he’s having a great time and with a couple of sharp lead guitar breaks tipping their hat to New York Dolls pioneering sounds, there’s every reason for you to be swept along by his trashy fun.

On the surface, ‘Our Love Is In The Grave’ might seem at odds with Ken’s party spirit – and indeed, the lyrics regarding the death of a relationship are a serious matter – but the arrangement has such a brilliant, upbeat vibe you’ll actually find yourselves forgetting what he’s singing at some point just after the first chorus. Taking a more obvious cue from Fox’s formative years as a member of Jason & The Scorchers, this track quickly latches onto an obvious rockabilly rhythm which, with a lead taken by a fiddle, quickly becomes a massive this rock ‘n’ roll hoe-down. Everything is extremely well played; decent production values add the necessary punch throughout. If nothing else, this tune provides a brilliant extension to Fox’s usual rock pop spirits. It gives the EP a very welcome feeling of variety and along with ‘One Less Step’, it’s a genuine standout – a track to return to time and again.

Changing the mood once more, ‘Stranded In The Heat’ reverts to an old rock ‘n’ roll style and the band are in good shape throughout. The solid rhythm that drove ‘One Less Step’ with its shameless power pop and handclaps makes a return, but this time everything is taken in a different direction thanks to a rollocking piano part and a sassy horn section. Chorus-wise, it isn’t quite the instant hit that’s expected, but the horns more than make up for that. Fox clearly knows how good they are too and, as a result, it feels as if he chooses to step back a little throughout. By allowing the whole band to rock out instrumentally during the closing section, this number quickly shifts from good…to bloody fantastic. There’s a lesson here: if you want a great sound for a party band, bring the brass! Among the newly penned material, this disc also features a cracking cover of the old Pink Fairies tune ‘Do It!’ and while that might seem like an odd choice at first, it’s repetitive shouty hook and howling guitar sounds more than make an impression. In lots of ways, the Rollins Band version from the late 80s will always be the best, but this has just enough ragged charm to hold its own.

Ken’s quirky vocal style might be an acquired taste for some, but there’s no denying that these five songs are retro bangers of the highest order. In a relatively short playing time, ‘Ken Fox And Knock Yourself Out’ has a little of everything: a couple punky riffs, lots of power pop cool, some party inducing fun, a ragged cover, a brilliant blast of horns, at least two classic choruses and even a rockabilly rouser. As far as extra-curricular works go, you couldn’t ask for a lot more in terms of all round quality. Highly recommended.

Watch the video for ‘One Less Step’ here.