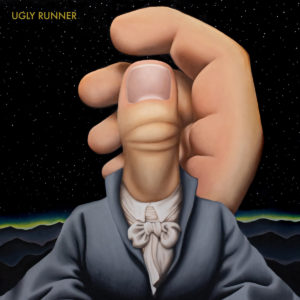 The EP’s best track, ‘She Was Your Girl’ flaunts a shamelessly 60s sound with a full compliment of jangling guitars and a punchy bassline, leading to the kind of musical hooks that would have suited The Flamin’ Groovies at their peak. The inclusion of a very melodic, twangy lead guitar break stokes up the overall melody as well as further accentuating a very old style power pop quality. In less than two minutes, Ugly Runner assert their potential to be just as good as many other garage rooted power poppers. However, they come with one element that sets them apart – and one that could be make or break for some people: during parts of this number, frontman Stephen Britt sounds faintly like Black Francis drenched in reverb. If you can make it past that, the drive and energy within this number will surely appeal.

Similarly, the raucous ‘Too Much TV’ brings plenty of thrills by applying a Ty Seagal-ish riff to a crashy garage punk workout that makes Ugly Runner sound like a band affiliated with the What’s For Breakfast? Records label. Over a sharp riff and crashing drums Britt howls and barks like a man who’s attempting to channel Lux Interior and Julian Casablancas at the same time; the guitar riffs alternate between a garage punk noise and hefty twang, while drummer Russell Walker creates merry hell behind his kit. Despite everything sounding obviously drawn from its key influences at times, there’s no getting around the fact that these guys sound great at what they do – and tracks such as this make it seem as if they’d be even better live. ‘This Time of Year’ finds Ugly Runner in a much slower mood. To begin, quieter guitars and cleaner, almost haunted vocals take centre stage, but true to form, it isn’t long before the musicians reach for the volume knobs and crank everything to eleven. This is a slower track, yes, but it’s no more tuneful than the others. From the second verse onwards, a heavy drum beat and distorted riffs steer everything towards something that sounds like The Strokes covering The Bad Seeds. Stripped of the energy of their usual style, Ugly Runner are no less interesting – Brett is clearly still enjoying any opportunity to play any kind of distorted guitar – but this is definitely more of a mood piece with regards to listening experience.

Opting for a little more melody, ‘When The Reaper Comes’ fades in slowly, setting up a tune that’s heavy on the drums in the process. Before long, the more obvious garage rock aesthetics trade places with more of a lo-fi rockabilly sound, allowing Britt plenty of space for a heavy twang. Like a lot of the material here, the overall sound creating that instant adrenaline hit seems to outweigh any longer lasting appeal, but as the number plays out, there’s plenty to enjoy if you can lose yourself in the moment. Taking on a more treble-oriented sound with a few broader guitar strokes, ‘How Lovely You Are’ moves closer to late 90s indie at first, presenting the kind of fuzz you’d expect from early Ride during an especially retro sound. It isn’t long before Ugly Runner revert to their more trusty garage rock sound, though, and a few moments really deliver on their earlier, spikier approach, while dropping in a couple of riffs from Pixies’ ‘Dead’ is a nice touch. For those looking to hear how well this band plays when less disguised by reverb, an instrumental coda returns sharply to the melody teased via the intro. By adding this, it gives this number a more rounded feel than most – but, that, said, the whole EP is enjoyable.

The band’s retro sound is particularly glorious during the first bars of ‘You Keep Me Up’, as a howl of feedback introduces a carefree, almost Meg White-like crashing drum part. Over a simple rhythm, the guitars throw out distorted jangling shapes and as Ugly Runner explore the constant push and pull between noisy 60s garage rock and a nineties revival sound there’s a lot to love. Things go from good to great, though, at the point an instrumental break hits. Here, the band abandon their love of noise and opt for dark and spooky as Britt plays several thinner, twangy notes atop a busy bassline. If it weren’t clear before, he is a fine player and the arrangement here allows him far more space to show off those talents. A couple of listens will be all that’s needed to elevate this to highlight status.

With its short musical attack helping to increase the overall impact, there’s something about ‘Romanticizer’ that just works, even though its core sounds can seem derivative. It’s never derivative in a bad way, of course; Ugly Runner’s best sounds know they don’t need to be original or too smart – just sharp. …And their work should be played as loudly as possible for even better results. If the garage rock/garage punk style appeals to you, you’ll almost certainly glean some listening pleasure here.