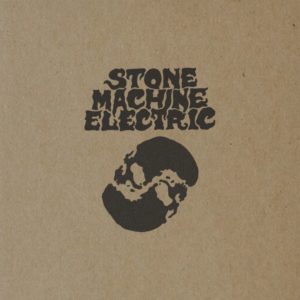 To move forward, sometimes it’s important to take stock of the current situation and go back to the past. On this two track 7”, Texan doom duo Stone Machine Electric revisit the first songs they ever wrote together and in doing so go back as far as possible. Both tracks have been previously available, but this release marks their vinyl debut.

‘Mushroom Cloud’ sounds like the same recording used for the debut album, but it also sounds as if it’s been presented in a slightly louder mix. Certainly, the differences – if any – aren’t enough to get excited about, but taking the track at face value, it remains one of the band’s defining moments. Moving between Crowbar-ish sludge/doom riffs and a slower, fuzzier funereal sound, the band sound by turns melodic, tough and menacing. A clean-ish vocal makes Stone Machine Electric more accessible than some doom bands, but it’s when neck deep into the instrumental breaks this band really comes into their own. During the track’s second half, with the main riff pounding and grinding very slowly, frontman Dub launches into some incredible lead work, where SME’s core sound takes in a huge array of influences from late 60s blues rock. It’s one of those tracks you can really lose yourself in, especially with the volume cranked.

The real treat for extant fans comes on the b-side, as ‘Walk Among The Blind’ was issued as a digital single back in 2010, but never reappeared on a full-length or physical release. A much bluesier piece, it allows Dub to channel a much gruffer vocal while churning great riffs that sound like a heady mix of Witch Mountain and Black Label Society while drummer Kitchens (yes, really) smashes his toms into oblivion. It may not be anything out of the ordinary in doom and sludge terms, but it’s excellently played throughout and genre fans will still find plenty to get their teeth into.

This is one of those times where more than two tracks would have been very welcome. However, for both long time followers and those new to the band, this 7” makes an brilliant collection filler.