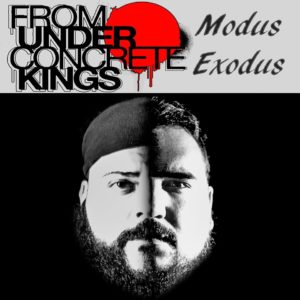 In terms of sheer force, From Under Concrete Kings are a hard trio to beat. Not that the band are pure noise makers, as their 2020 EP ‘Modus Exodus’ is keen to demonstrate, but they are always incredibly intense. The EP’s opening track, ‘Destroyer’, doesn’t even have an intro; within half a second, Valesco is locked into a speed driven, pneumatic bass drum frenzy whilst Isayea absolutely blows his throat with a deathcore growl that’s hard to beat. A couple of verses of a sound blending death metal vocals, with various metalcore musical traits and a shifting Djent-edged time signature very quickly asserts the band’s need to experiment. Approaching a chorus, there’s actually a very dramatic shift as the band brings in cleaner guitar work, a more melodic vocal and almost a soul inflected approach to metal. It isn’t too far removed from some of the best tracks from Killswitch Engage’s career defining ‘The End of Heartache’ from 2004. It’s only an influence rather than a straight copy, though, since a returning heaviness shows more of a hardcore intent than Killswitch have ever mustered, while various pneumatic stops and off-kilter lead guitars continue to flaunt FUCK’s more progressive elements.

‘Self Terminate’ seems even heavier at first as a lurching, ugly vocal shouts against a grinding riff. The opening of the track feels a little messy, but an odd move into progressive metal soon allows a clean vocal to steer a more obvious melody, before a complex Djent guitar makes later parts of this ever shifting number far more interesting. By the point some of the heaviness subsides – or maybe your ears adjust to the musical chaos – this track takes interesting prog metal influences from Unexpect, Between The Buried & Me and some of the instrumentation from Skyharbor, throws those against a few metalcore drums and comes up with something special. It’s a number that on one hand has a somewhat patchwork feel, but on the other, is actually very exciting – whichever way you approach it, it definitely shows off a broad range of twisted talents. Having already mangled their audience’s minds, on ‘Grim Satisfaction’ FUCK presents their concoction of ferocity in an even more aggressive fashion. Clinging onto a vocal that fuses extreme hardcore and death metal traits and pushing that to further extremes, Izayea sounds like someone ready to burst, while the musical backdrop has now grown to include even more downtuned and Djent-influenced guitar noises as well as more of a deathcore aspect. This track definitely finds Valesco on top form during the first half, before a full scale descent into melodic death metal – peppered with metalcore pneumatics – really tests his intensities. After a couple of minutes of already aggressive metal, everything then plunges into a genuine musical darkness. At the close of this number, you might feel like you’ve been pummelled for much longer than three minutes, but there’s no denying this band’s full on commitment to all things heavy…and heavier still.

Finally, the band’s choice of single, ‘Snakecrusher’ is a chaotic voyage through everything you’ve heard so far. The intro plays like a much straighter blend of metalcore with added death grunts and this will return as a theme throughout, but there’s more than enough room for a Djent-inflected chorus, extreme thrash and a few odd stops and time-signatures to throw everything off course along the way. By the time the metalcore riffs really take a hold around the two and a half minute mark, FUCK seem utterly committed to seeing out the rest of the track in a solid and timely fashion and then…it’s all change again, with tinkling bells leading into a final hook that comes straight from Killswitch. It’s hard going, but for all of the intensities and twisting of the arrangement, that final shift into something resembling something more accessible is an important reminder that From Under Concrete Kings really do know their way around a great melody.

If you think extreme metal has somehow become formulaic and tired, From Under Concrete Kings are on hand to show you how wrong you are. By taking massive chorus melodies and throwing those into the kind of arty noises you’d expect from Between The Buried & Me, their work is constantly challenging, yet often exciting. In fact, this might be one of the best progressive metal releases since From The Imperium released ‘Hail The Monsters’ back in 2013. It won’t be for everyone, but those who like it will love it.