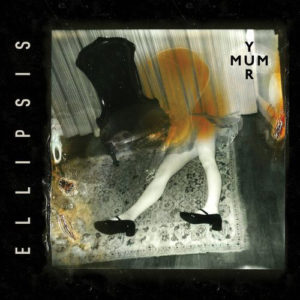 There’s even more of a surprise when that opening track appears to reach a natural end and the duo decides not only to crank their gears a little further, but also change styles entirely. Out goes the metal; in comes a weighty take on garage rock, placing Yur Mum somewhere between Royal Blood and the brilliant Band of Skulls. With that, Kunz’s voice becomes a far more natural fit as she yelps through the final verses and the speed-driven arrangement latches onto her howls of anguish. “What do you want from me?‘, indeed… More of this, obviously, as this has been a terrific opening statement.

Moving into ‘Sweat Shop’, the punkier edges of the duo’s sound explode with a real fury on a track that takes the guts of older L7 material and glues them to a bassline that sounds as if it’s been lifted from White Zombie’s ‘Black Sunshine’. The main groove barely changes throughout, but the sheer energy combined with an unrestrained vocal makes excellent listening. If you’re a fan of really aggy garage rock and bits of classic stoner metal, this will be a must-hear. It’s definitely an instant highlight as far as this EP is concerned. A rattling bass riff introduces ‘Rotten’, a four minute groove oriented number where the vocals hit upon a mood that’s distinctly more gothic, but without altering the band’s core sound too much. The fuzz that colours the edges of the main riff gives a classic sound, and the retro qualities sound even better as Kunz rises from a croon to a scream. With the track reaching full power, the middle section sounds like something Brody Dalle might conjure if she got to jam with Royal Blood – again, it’s another stand-out moment – but just as you think Yur Mum have peaked, a fierce blues solo pushes everything further.

Released as a single ahead of the EP, the title track is a tour de force of bluesy stoner metal, taking in bits of Ruby The Hatchet and Orange Goblin, while retaining some of the elements that have already made Yur Mum so distinctive. Anelise summons a hell of a lot of power through a deep and blues drenched vocal, which she then shakes up with unexpected yelps of anguish, while drummer Fabio leans heavily on the cowbell. This is Yur Mum in full flow, mixing several of their influences into a melting pot of bleakness along the way. By the time the instrumental break arrives, they find even more musical inspiration as the metallic edges subside for some good old psychedelic blues of the late 60s variety. In short, the individual elements are strong, but combined, they’re a sensation.

To close, the aptly named ‘Closure’ makes a showcase for a superb bass sound while a more sultry voice shows the band at the most retro. Throughout this quieter and more spacious arrangement, there’s more of an opportunity to take in Fabio’s very naturalistic drum sound, but if anything wins out, it’s a huge bass grind that sounds as if Anelise is channeling The Fierce And The Dead’s Kev Feazey as those four heavy strings underscore howling guitar lines and a primal vocal. As Yur Mum bow out, there’s every chance you’ll be left wanting more. Much more.

This EP is brilliant – a real musical treat. Sure, you could spend a lot of time pin-pointing the various influences within the songs, but at the end of it all, it’s the way Yur Mum use those influences that’s the most important thing and their angry, grinding, shrieking, punky, metallic, bluesy concoction is genuinely exciting. This release deserves to be heard by all lovers of distorted riffs and fuzzy sounds. Buy it, burn it or steam it at the earliest opportunity.