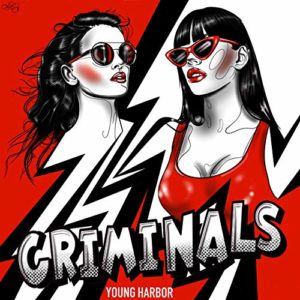 Another stand-out, ‘Lipstick Marks’ kicks off with a fine guitar jangle, applies that to a bassline that appears to have been partially borrowed from The Jam’s classic ‘A Town Called Malice’ and ends up with a great pop rocker with vaguely garage-ish overtones. With a little more of a spacious feel throughout the verses, frontman Guy Amir has more room to move and he takes full advantage by filling those spaces with lengthy notes that help build atmosphere. Following such a grand verse, the chorus isn’t quite the expected banger, but it comes with enough energy and pizazz to keep up the momentum. It’s almost like Young Harbor have perfected their own take on the Strokes-ish pop-rocker, but where The Strokes always came up short and their music felt like a display of sheer arrogance, this feels more like a soundtrack for good times. ‘Summer Lovin’ allows bassist Adam Troselj to be more of a featured player with brief bursts of busy playing throughout. His rock solid style is a great backdrop for guitarist Brandon Malave, whom at this stage appears to be channelling the more commercial Cure material and bits of U2’s ‘Boy’ for all they’re worth. With a hugely uplifting hook that retains a very old school 90s quality, this is a brilliantly accessible four minutes that would make a great radio single.

The only time Young Harbor miss the mark is during the supposedly celebratory ‘NYC Girls’ –- Musically, it’s all fine; the problem comes with the chorus which is so flippantly approached, you can sort of tell they’ve set out to create something catchy, rather than allowing that to come naturally. As is sometimes the case, this all seems like a contrived annoyance as they just repeat the same line over and over. With six other very strong tracks to prop this up, of course, it doesn’t really harm the release overall. ‘Stand Beside Me’ is much better and although at first it doesn’t really stand out, a few plays uncovers a great pop rocker with more fantastic bass work. While this almost retreads similar ground to a couple of other Young Harbor tracks, its use of stops and reverb really catches the ear, while a distorted mid section with a shoegaze influence adds a little extra texture.

Elsewhere, ‘Animals’ takes the by now established indie-pop sound and injects it with the kind of energy you’d find on a Vampire Weekend track – again, a solid vehicle for Adam, but it also gives drummer Enrique Soteldo a tight workout – and ‘OCD’ taps into something a little darker, weaving fat basslines and Stuart Adamson inspired guitar work into a punchy pop rocker. Much like the opener, this is where the post-punk influences are at their strongest. Between the very 80s sound and a strong vocal, it’s got plenty of teeth. A chorus of any sort might have been nice, but since the arrangement that never truly settles, there’s more than enough to occupy the listener throughout. In the hands of Franz Ferdinand a decade previously, this would have surely been a hit.

Overall, this is very enjoyable for the style. Young Harbor’s song writing hits the spot more often than not and without trying to be flashy, while the guitar work often helps build the pop-ish melodies into something a little more robust. That annoying chorus on ‘NYC Girls’ aside, there are very few obvious weaknesses and the overall familiarity of the musical style works very much to the band’s advantage. Fans of The Killers, Franz Ferdinand and (to a lesser extent) Follow The Lion could find this a very enjoyable listen.