Over the past two years, Marillion have revisited their back-catalogue with the release of several box sets, pairing some much loved albums with live material, demos and much-celebrated 5.1 mixes. Following the release of the ‘Afraid of Sunlight’ box set in 2019, the next installment comes in March 2020 with a lavish reissue of the debut album, ‘Script For A Jester’s Tear’.

A long held fan favourite, the five disc set will include a new stereo mix of the album by Andy Bradfield and Avril Macintosh, a brand new 5.1 mix, a documentary on the making of the album – now heralded as a prog rock classic – and a wealth of early live material.

A full rundown of the contents can be explored below. 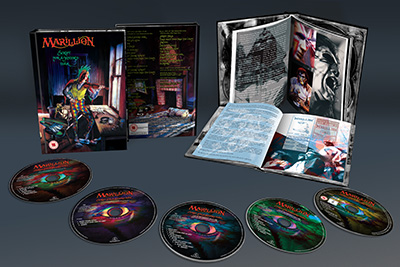 Discs 3 & 4:  Live At The Marquee 1982
Garden Party
Three Boats Down From The Candy
Grendel
Chelsea Monday
He Knows You Know
The Web
Script For A Jesters Tear
Forgotten Sons
Market Square Heroes
Margaret