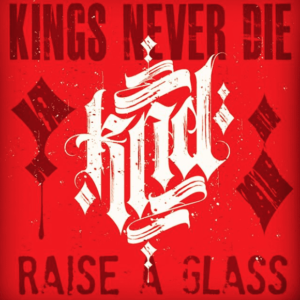 The union of these 90s heroes sounds at its very best during ‘Never Know What You Might Find’, a two and a half minute workout that showcases Kings Never Die’s knockabout potential in a no frills way. The hardcore punk riffs that introduce the piece waste no time in invoking a mood that’ll inspire a fierce circle pit as drummer Milnes sets a relentless pace while bassist Jay Kaflin (also of Sub Zero) offers a really meaty sound as he rattles his four strings. It’s a track that – even for the genre – comes with a by-numbers predictability, though, as a mid section slows right down to introduce a heavy chug that serves a purpose in increasing tension, Sick of It All style, before the band explodes with speed and aggression a second time. If you don’t mind something that seems a little over-familiar from first listen, there’s something here to be enjoyed, but beyond that, the material is a bit more hit and miss. ‘Before My Time’ leans much further towards the metal end of hardcore, often with a very heavy debt to classic Anthrax. This gives Nastasi a lot of room to deliver a crunchy but fairly ordinary riff, while Nieroda settles for a shouty hardcore vocal that draws far more influence from old style NY hardcore. With a lot of timeless elements at their disposal, this should be great, but a thin production sound and too much of a tried and tested sounds really doesn’t bring out the best in anyone.

Despite this EP having a couple of things to recommend it, the title track is terrible. A heavy handed drinking song, its verses come loaded with heavy drums and some very calculated shouts designed to rouse a live audience. The melody – or what there is of one – quickly becomes annoying and a gravelly lead vocal is just ugly. The presence of members of Agnostic Front to reinforce any shouty tendencies aren’t especially a plus point either, especially since everything just sounds far too heavy handed. It’s only with the speed driven instrumental breaks that this track has any real merit, but even then, you’ve already heard Nastasi do similar things in a much superior way during Dog Eat Dog’s ‘Who’s The King’ several years ago. Even with best intentions, this is just a bit…sad. Thankfully, things pick up again with ‘The Juice’, a thrashing, no-nonsense slab of hardcore that sounds like later Agnostic Front colliding with Burn and Judge in one massive hardcore face off. During the faster sections, the band absolutely blisters while Nieroda shouts with intent, but its actually when slowing down things really take off. Once Nastasi hits full chug, the way he locks his riff in with the bass drum gives the slower riffs a very strong link with the classic Anthrax sound once more and using that to underscore a very melodic solo, there’s a lot of metallic potential in the heavy sound. The band seems to know this too, as they’re not shy in using these more metal oriented traits to power a very effective coda.

In all honesty, given the years of experience Kings Never Die have racked up between them, this EP should be so, so much better than it is. Even looking beyond the pointless pirate sympathies of the title track, a lot of the material is still hampered by a production job that doesn’t quite hold up. There’s a certain amount of crunch throughout, but the recording has been subjected to an odd final mix that makes the drums sound as they’re coming in from another room and everything’s a little hollow sounding. If you’re a fan of this style – and have followed Nastasi’s career since the 90s – you’ll certainly want to hear this, but its probably best not to set your expectations too high, as you already own dozens of much better records in the same vein. Two of the four songs are solid enough numbers that’ll hold some appeal for lovers of crossover sounds, but somehow, it doesn’t feel as if that’ll be enough to make this truly fly.