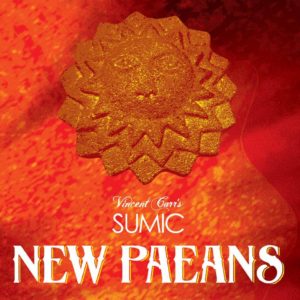 With no record company demands and the artist not ever rushing to create new music, a follow up was always going to be a long time in appearing – if, indeed, one appeared at all – but 2019’s ‘New Paeans’ was well worth that wait. It doesn’t always take the expected musical route and give listeners more of the same but, in that sense, it makes for a very interesting return.

At first, the album feels as pastoral and unashamedly old English as its predecessor as Carr sings unaccompanied in a trad folk style, ruminating about travel, belonging and being at peace. That opening track, ‘Parrish Blue’, then changes tack completely to introduce disjointed guitar notes over a waltzing rhythm. This throws the listener off balance in an instant, but given a few bars to settle in, it sounds great as the melody increases and Vincent’s use of harmonic guitar sounds kick in. The lead work is hugely influenced by early 70s Mike Oldfield – something which should perk up the ears of the older prog rock fan. With the re-introduction of a natural vocal, the track doesn’t feel as much pastoral as festive, though an underscoring of bells is a huge factor in creating that mood. Following a brief burst of busy but excellent guitar work, the track appears to come to an end, but that’s just the closure of the first chapter. From near silence, keyboards hint at vaguely classical roots, before harmony vocals and a lovely crying lead guitar take centre stage. With SUMIC reaching something close to full prog rock potential, there are huge influences from ex-Genesis men Ant Phillips and Steve Hackett, but those don’t come across as obviously as the influence behind the vocal. Right from first listen, Carr’s chosen melody has a strong Floyd vibe and within seconds, it’s clear he’s been listening to ‘Echoes’. At this point, ‘Parrish Blue’ moves from good to excellent and with the main melody shifting back to the Oldfield-eque for the remainder, there’s more than enough great music in which to indulge. In fact, it comes as a huge surprise that this clocks in at twelve minutes; when listening, it only feels half as long…and that can only be a good thing.

Another epic number, ‘Reivers’ explores a more ambient style with a long droning intro that fuses a few space rock sounds with the sprawling, casual feel of 70s Tangerine Dream. A bass drum punching through the noise suggests that something will happen, but with Carr bringing in a few fractured sounds, it seems to be in no hurry to do so. …And then, a definite rhythm peeks through and a huge riff is delivered from a massive fuzz bass. With that bass taking on an almost post-punk mantle and the lead guitar work adopting a similar pointed sound, this is a real departure from the previous track, but no less enjoyable for that. It’s a pleasure to hear an artist who isn’t afraid to experiment and obviously doesn’t just want to play safe. In terms of lead guitar work, this soon becomes more appealing as a second lead appears in the right speaker, dropping various wah-ed sounds over the bass groove which, obviously, hasn’t wavered. This could fade at six minutes and still feel complete, but Carr has other ideas. He shifts the balance a little to accommodate a lovely, bluesy solo before exploring more ambient textures and a world of haunting notes that sound as if they’ll burst into the ‘Soon’ coda from Yes‘ ‘Gates of Delirium’. It’s definitely another important touchstone for the prog fan taking a first listen. With a last musical theme set up, the lead guitar plays a really mournful refrain – and while it suits the piece well, it’s not something to listen to if you’re you’re feeling a little fragile.

Much chirpier, ‘A Song To Lead You On’ delivers a busy folky jig – revisiting the more Freddie Phillips-esque elements of the previous album – and for some listeners, this will surely create one of the most instantly lovable melodies. It’s certainly one of the most urgent. Using a forthright bass to punch through the acoustic sounds, it also has a great sense of depth. Moving back to much softer moods, the title track explores more of Carr’s ambient and folk influences. To begin, he drops in a few multi-layed guitar sounds, but keeps the mandolin dancing in the foreground so there’s a natural flow from the previous piece. Although it occasionally seems as if he’s presenting two tunes at once, it somehow works. Fans of intricate guitar work will find plenty to enjoy as Carr then busies himself with a set of nylon strings, channelling his inner John Williams. With a vaguely medieval theme woven gradually, we get an even deeper insight into this musician’s love of all things folky. The repeated musical refrain is surprisingly catchy too: the way the guitar meshes with a synthesised orchestral drone captures the SUMIC love of mixing influences. This is effective, but for pure enjoyment it is no match for mandolin sounds that drop the listener into a world where Mike Oldfield has been asked to join Fotheringay. This is a really interesting fifteen minute musical journey; by turns celebratory and sad, it shows off Carr’s musical abilities brilliantly. The introduction of a drum machine during the climax is a bit of a letdown – it very much draws attention to this recording’s homespun origins; perhaps a little too much attention – but it’s the only weak part during an album that’s otherwise lovely.

Following a musical interlude based around acoustic improvisation (‘Lament’), Carr chooses to end this journey somewhere more familiar, as he puts his own stamp on the traditional lament ‘House of The Rising Sun’. Covered by many in all different ways [Dylan – folky; The Animals – gruff and epic; John Otway – funny], what exactly can this version offer that makes it unique? Simply that Carr has been unafraid to play up the maudlin aspects of the lyric and, in turn, adapt it with some brilliantly morose music. At the outset, he sings the first verse unaccompanied – suggesting he’d been listening to Anne Briggs – before bringing in other elements…very slowly. There are soft harmony vocals, impeccably delivered; a sparse piano, vaguely Celtish drones and – best of all – a very understated bluesy guitar solo that brings out the very best in Carr’s chosen tone. It might not feel as grand or important as the self-penned originals, but it fits the album very well…and it presents itself in a way that might make you re-evaluate a song that possibly felt overplayed.

‘New Paeans’ is a very different album to ‘Rekindled’ in many respects, but if Vincent had spent four years attempting to re-create something that already existed, there would have been very little point. With elements of trad folk rubbing against experimental instrumental works and even more of a concession to prog than before, this album really adds to his already broad palate of sounds and moods. It isn’t an every day listen and not everyone will get it, but that’s the same with so much prog and progressive music [two very different animals]. With this album, Carr takes a step forward – and sort of sideways too – but the results are always interesting. Its a work that deserves to be on the radar of many fans of folk-prog, ambient folk and niche singer songwriters.

[Read a review of ‘Rekindled’ here.]