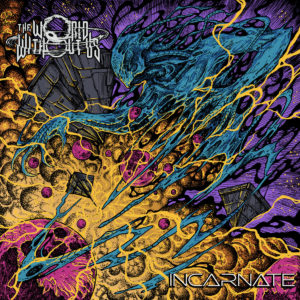 Although only together for around eighteen months at the close of 2019, Pennsylvania’s The World Without Us have gigged intensively and already shared a stage with the mighty Soulfly. It takes some bands years to gain that kind of attention, but one listen to their ‘Incarnate’ EP is pretty much all you’ll need to be convinced that these guys are one hell of a metal band.

Taking huge swathes of metalcore, a pinch of prog-metal and a couple of other influences, this EP is a giant melting pot of riffs. Riffs big enough to take on the very best; something helped no end by a heavy production style that is streets ahead of so many bands’ first DIY releases.

‘Listen In Obsidian’ gives the EP a very interesting launching point, as it’s a track that doesn’t hurry to show off the band’s trademark sound. Instead, it fills the first two minutes with a very off-kilter, almost cinematic workout. With a soundscape built slowly from clean toned guitars and rumbling drums, there’s a particular proggy feel from the outset and it’s great vocally too, with Mario Canavarro curling his voivr over sounds that occasionally hint at Pineapple Thief and other bands from the Kscope stable. With the passing of each verse, it’s clear that the sound is gradually building until finally a sledgehammer riff crushes everything. To finish, the band set about some fine metalcore that blends a classic sound with a desire to take such a heaviness into new places. …And with that sense of adventure set in place, it’s even more thrilling when ‘Man Sized Hail’ takes those traits and cranks them further, resulting in a four minute patchwork of heavy as hell sounds. Once the main riff is set in place, the band takes another musical turn to experiment with progressive metal time signatures before fusing their already heavy sound with a bit of death metal and hardcore. There are hints of Killswitch Engage, of progressive death metallers Mirrors of Obsidian and much more…and although it’s far from an easy listen, it’s all brilliant.

‘Things To Tell The Press’ is a tour de force of anger as The World Without Us latch on to a couple of absolutely fantastic riffs. The noisier parts of a very challenging arrangement sound as if they’ve tried to graft Fantomas onto I Am The Law and a melodic death troupe, before everything slows to settle into a fine groove, over which there’s a very melodic, soaring prog metal solo. The way the vocals that pull the band further in line with Soulfly, Slipknot and classic metal often suggests that within the complexities, there are great tunes – making this track ideal for a first listen. It’s very much something most metal fans should check out. Finishing an already great release (and one that’s covered a lot of musical ground in fifteen minutes), ‘I Am The Mist’ shows off the band’s gift for a chorus more so than before. With a more spacious arrangement and a hook centring around a clean vocal, there are elements here that show TWWU at their most melodic – during the chorus sections Mario wails with an absolute confidence – but in other ways, it’s one of the most challenging tracks, as the band’s kitchen sink approach goes into overdrive. It starts in a place where metalcore and groove metal meet, before shifting into that chorus and subsequently taking in bits of melodic death and sludge metal before bowing out. No matter what the style, though, guitarist James Sundwall plays with real conviction and as much heaviness as possible. For lovers of a massive chug, this will more than hit the mark.

Admirers of huge riffs will definitely need to hear this, as will fans of djent weirdness and off-kilter, arty progressive metal (that’s genuinely progressive, as in trying new things and not prog). Although only four songs make up this debut, in some ways that’s all you need, since The World Without Us’ love for combining maximum intensity and angular noises can be quite draining in places. Always in a good way, of course, and their sense of adventure should be very much be applauded.