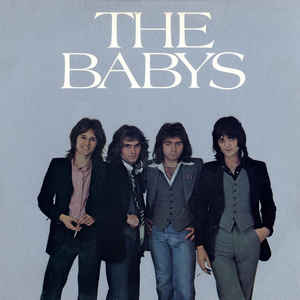 Released in 1976, The Babys’ self-titled debut was actually their second attempt at recording an album. An record’s worth of rockier tracks were laid down in 1975 but shelved when the band were encouraged to follow more of a power pop route. ‘The Babys’ is arguably the weakest of their five albums released before the end of 1980, but that says far more about the high quality of its successors than of this disc itself. It’s a record with far more of an adult appeal than it’s pseudo boy band artwork would have you believe and although the album does still feature occasional sugary overtones, it has a bigger connection to rock than first appearances suggest. It doesn’t always reach the heights of a couple of their later albums (especially 1980’s ‘Head First’, a slab of vinyl no melodic rock collection should be without), but it’s a fine effort.

It’s a record that opens with a real intent too, as ‘Looking For Love’ combines a powerhouse drum performance from Tony Brock with some great 70s rock sounds from the rest of the band. Within the first minute or so, The Babys announce their arrival on the rock-pop scene with a chunky riff juxtaposed with John Waite’s friendly vocal. In a change from later recordings, his performance is half buried by effects and echo, but most of the hallmarks of a sound The Babys would soon master are all to be found here. At the point where you’d expect the song to escalate into a big hook, guitarist Wally Stocker steps forth with a semi-aggressive solo – his flurry of notes almost sounding siren-esque, while a second lead guitar break splits between the speakers and entertains with a more traditional hard rock flair. Always more about musical prowess than general hookiness, it’s a brave move placing this at the front of the album, especially when the second track is an absolute killer – the kind of thing that instantly grabs the attention in a way that more than shows The Babys’ greatness, even at such an early stage.

That second track is reason enough to own this whole record. ‘If You’ve Got The Time’ fills an all too brief two and a half minutes with a rocker that injects power pop with a touch of glam. From the get go, Waite asserts himself as a great singer while Stocker, once again, fills the instrumental space with some flawless guitar work. What’s always going to win fans, though, is the chorus: here, The Baby’s wheel out some massive harmony vocals and pre-empt the kind of thing Rick Springfield would popularise in the early part of the next decade. ‘I Believe In Love’, meanwhile, keeps up the quality while simultaneously suggesting The Babys are a band with a great musical range. The opening verse quickly sets a fine power ballad in place – Waite’s vocal truly shines –before a heavy drum cements an already strong performance. Instrumentally, it’s nice hearing everyone pull back: Stocker’s bluesy guitar work is especially good throughout, but the less is more approach really serves the band well during the latter part of the track as Waite’s repetition of the title almost takes on a gospel like mantra. Not just a fine rock ballad, but a mature and sophisticated performance. There’s a much greater depth here than their early public image ever really suggested.

Slowing down, ‘Wild Man’ offers a more spacious verse, something very sympathetic to Waite’s very natural vocal style, but if anything leaves that all important lasting impression, it’s Stocker’s guitar work. There’s nothing flashy here, but Wally shows how less can often be so much more with a succession of gentle blues-inflected leads and a few stately riffs. The way those riffs are placed against a similarly un-showy drum part gives this number all of the hallmarks of a great Bad Company ballad circa 1975. With their ear for AM radio pop, of course, The Babys constantly steer this beyond Rodgers and co’s pseudo-macho efforts and a few plays is enough to set this in place as an album highlight. That’s the point where ‘The Babys’ goes from good to great, but with the big ballad ‘Laura’, the album delivers another real keeper. With a warm bass and sedate guitar sounds, its a track that instantly puts itself among many 70s AM radio ballads, very much the kind of thing you’d find on any Elton John, Kiki Dee or even Andrew Gold albums from the period. The clean guitar work is lovely; the subtle piano work lovelier. With a few sparingly used twin lead sounds and crisp synths boosting the instrumental break, The Babys break even more new territory, but thanks to Waite’s always distinctive lead vocal, it compliments the previous numbers very well. The only drawback comes with a few grandiose falsetto harmonies leading into the fade, but it’s a small concern that doesn’t really damage the previous brilliance.

Flipping the record over, the second side actually opens with a run of weaker tracks. First up, the band attempt to put their own stamp on Barry Mann’s ‘I Love How You Love Me’, something that really should’ve turned out much better. Recorded by The Paris Sisters in 1961 and covered by countless others, including Nino Tempo in 1965 and tackled by Bryan Ferry in his own imitable lounge lizard style in ’73, it’s a tune that seems fairly bulletproof and given the underlying boyish appeal of The Babys, a cover certainly made sense. Considering Waite’s abilities for putting across simple emotion, this should have made sense, but attempts to beef up the guitar part makes the music often feel laboured and uninteresting. That, combined with a final mix that sounds like it’s been stifled is enough to kill the mood. It’s bound to have its fans – almost everything does – but it really lacks the pizazz of the Bryan Ferry version from a couple of years earlier. [More on that can be read here.]

Via a bog standard rocker ‘Rodeo’, we get another insight into Stocker’s guitar chops, but beyond that, the song offers very little that’s memorable in the long term, before everything fizzles out completely on ‘Over and Over’. All piano and vocals, it ambles for the better part of five minutes, never really going anywhere and certainly not having the confidence of ‘Laura’. Very much the epitome of album filler, in lots of ways, it’s where The Babys come closest to matching their semi boy band image of the time, and the closest they ever came to mirroring their Aussie equivalents, Daryl Braithwaite’s Sherbet. It’s a tune that sounds nice enough once in a while and although he’s no match for Waite, Brock’s lead vocals are fine, but you’d hardly pick it as a great representation of what The Babys could do when heard at their best.

Thankfully, from here on in, the album builds itself back up. Firing on all six, ‘Read My Stars’ is a brilliant example of The Babys’ best fusion of melodic rock, power pop and glam. With a sound very occasionally reminiscent of Billy Squier’s band Piper, Stocker leads everyone through an amazing rocker full of great guitar work. Waite struggles a little with a few of the more extreme notes and appears to be fairly far back in the mix to compensate, but overall, it’s a superb performance – a more than worthy demonstration of the whole band’s talents and very much a glimpse of those better things to come. The album’s epic closer, ‘Dying Man’ has a bleaker viewpoint, but that’s balanced out by more first rate music. In this instance, it’s keyboard player Michael Corby in the driving seat as he blends a strident piano line with a hastily used clavichord sound. This 70s pop-funk gives Stocker a great base to work from and he fills the first part of the track with some simple but effective blues rock leads. Shifting gears around the two and a half minute mark, Brock’s drumming seems more insistent in moving everyone towards more of a proto-disco vibe, but this only makes Stocker play harder. Waite, meanwhile, is subjected to vocal filtering – something that brings these thirty nine minutes full circle – but unlike the opener, those extra effects work, in that they increase the mounting sense of unease. At the point where the track reaches a natural end, everything fades out into a blanket of synths, before Corby strikes a really grand chord on the piano, ushering in an instrumental coda that wavers between a prog epic from Supertramp and the duelling guitars of Lynyrd Skynrd. There’s very much a feeling that – like the second half of Derek & The Dominos’ ‘Layla’ written by Jim Gordon – this might not have specifically been written for this purpose, but once you’ve heard it, you’ll be more than glad of the appendage! A very strong finish, indeed.

Thanks in no small part to that massive dip at the beginning of side two, ‘The Babys’ is arguably the weakest of The Babys’ five albums released before the end of 1980. It is, at it’s very heart, more often a showcase for the four band members as songwriters than a classic set of songs but, that said, it’s still very enjoyable. Although, somewhat understandably, ‘The Babys’ is often overlooked in favour of later releases ‘Union Jacks’ (1979) and ‘Head First’ (1980), it more than holds its own as a first effort.

[Out of print in the UK for years, ‘The Babys’ was given a welcome CD reissue as part of Cherry Red/HNE’s mid-priced box set, ‘Silver Dreams: The Complete Albums 1975-1990’]