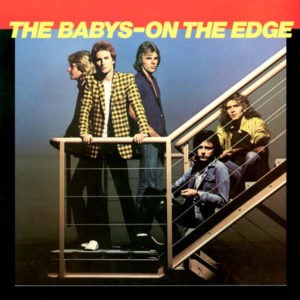 With their third album, 1979’s ‘Head First’, The Babys finally gave the world a genre classic. Their first two albums weren’t short on great material, but occasionally wavered with a couple of lightweight tracks here and their which sometimes seemed to lessen the overall quality, especially from an AOR/melodic rock fan’s perspective. In ‘Head First’, it felt like the first time all of the pieces truly fit. Aside from a bizarre song where John Waite recounts a childhood visit to the dentist, pretty much everything on the album represented The Babys at their absolute best.

…And then, the band suffered a set-back when founding member Michael Corby quit. However, it was a move that would actually benefit the band in the long run. His replacement, Jonathan Cain (formerly of the self-explanatory Jonathan Cain Band), was not only an arguably superior musician but also a gifted songwriter. Also as part of the change, Waite stepped down as bass player to focus on his role as frontman and Ricky Phillips was drafted in to cover all four-stringed duties. Although ‘Head First’ was arguably the band’s best album to date, ‘Union Jacks’ (released in January 1980) set the band’s strongest line-up in place. With that record scoring The Babys their third consecutive Billboard top 50 hit, no time was wasted in returning to the studio and ‘On The Edge’ appeared on record store shelves in October.

In so many ways, ‘On The Edge’ rivals ‘Head First’ for quality at almost every step. ‘Turn and Walk Away’, in particular, is a fantastic opener. Following a massive power chord from Stocker, Cain takes over with a barrage of stabbed keyboard sounds, instantly setting the purer AOR wheels in motion. With the arrangement eventually fleshed out by a great pop rock riff, The Babys show off a real gift for a sound that borrows from a slightly more Westcoast influence. Between a strong lead from Waite, some classic backing vocals and a Fender Rhodes keyboard sound linking everything, this is an instant classic – lovers of Waite’s solo career and bands like Joe Lamont’s Shelter will find lots to love. …And for first time listeners, it’s pretty much the best entry point to The Babys’ catalogue as you’ll find. Opting for something a little rockier, ‘Sweet 17’ might err on the side of a couple too many “good girl gone bad” clichés, but it actually wins out thanks to another great riff from Stocker – very much recognising simplicity is key here – and an even bigger punch from Phillips on the bass. Once you’ve factored in a really infectious chorus that encourages counting, it becomes easy (or at the very least easier) to overlook the seamier elements of the lyric. ‘She’s My Girl’ is a tune that combines The Babys’ now perfect melodic rock with a little more of a new wave sound. Although very much a track that draws a couple of parallels with Rick Springfield’s brilliant ‘Working Class Dog’ album (released just a couple of months later) there are still lots of superb Babys hallmarks throughout, including a fine power pop chorus replete with harmonies and – not least of all – another fine performance from Waite. At this point, he’s really come into his own as a vocalist and his natural style really shines throughout.

It could be argued that those three tracks create the most perfect opening to any Babys album, but the quality holds up throughout the rest of the disc.’Darker Side of Town’ briefly changes the mood with a big piano ballad opening. Cain’s keys have an 80s crispness and never seem a never a million miles away from carrying an Elton John influence. With these quieter moments comes another great vocal and with the arrival of a heavy drum, the number quickly blooms into a moody rock ballad. Ir’s slightly grandiose but always values the song writing over any bombast. With the piano traded in for Fender at the close, it could be considered a product of its time, but for fans of late 70s AOR, it’s very much a classic. Closing the original record’s first side, ‘Rock ‘n’ Roll Is Alive & Well’ is a frivolous rocker that places Cain high in the mix. As he hammers at the piano, it becomes clear that ‘On The Edge’ has a different sound to the earlier albums and The Babys’ melodic rock had started to look towards the new decade’s possibilities. On the surface, it might seem like one of many throwaway party rockers, but thanks to a busy piano, harmonious guitar lines and some big backing vocals, it elevates to something a little more interesting.

‘Downtown’ is another of the album’s true highlights. A punchy rocker, Stocker’s guitar work is more than carries the feel of Andy Summers on the verse (more specially, parts of The Police’s ‘Be My Girl (Sally)’ from a couple of years earlier) before the chorus steers everything in the direction of something that would suit Waite’s 1982 solo debut, ‘Ignition’. With another catchy melody and a few huge, crashing chords to finish, this really deserved a place among the bright lights of early 80s power pop rather than being a deeper album cut. It’s prime for rediscovery. Following this with another solid slab of 70s power pop, ‘Postcard’ shows off a natural vocal that fits well with a simple riff. With best foot very much put forward musically, the first two lines of the chorus set it up as the band’s best ever recording: there’s a fantastic, harmony filled refrain that comes somewhere close to mining AOR gold…and then when you’re expecting a second rhyming couplet, it stops dead and shifts back into the verse. Talk about leaving your listeners hanging… This isn’t enough to cause permanent damage, though, as the hook is lovely and catchy as hell…you’ll just wish there was a little more of it. Even with an obvious flaw, it joins ‘Turn and Walk Away’ in the pile marked “essential listening”.

In another slight change of mood, ‘Too Far Gone’ pushes The Babys towards pseudo macho rock ‘n’ roll, very much bringing Tony Brock’s drums to the fore. There’s a really solid bassline from Phillips lurking beneath the riffs, helping to accentuate the perceived toughness. While Waite can seem a little uneasy stepping into a tough guy’s shoes, his performance is fine enough. While this could be considered a trashy cast-off in comparison to ‘On The Edge’s more mature material, it’s clear that someone within the ranks worked hard to keep things halfway interesting as there’s a somewhat odd musical shift when Cain’s off-key keys suggest a soundtrack for a car-park rumble. That, plus a nice, bluesy solo from Stocker is more than enough to save face here.

Revisitng the big rock formula of 1979’s ‘Back On My Feet Again’, ‘Gonna Be Somebody’ is the album’s obvious single cut. A wall of ringing guitars kick things off brilliantly as The Babys show off their power pop peacock feathers before scaling back a little for Waite’s vocal to add a little extra magic. In many ways, this marriage of sounds should sound like The Babys on autopilot as they’ve done it all before – particularly on the ‘Head First’ LP – but as the track gains momentum, it holds just as firm as anything in their catalogue. With Stocker wheeling out a really succinct but thoughtful solo and a huge chorus loaded with AOR harmonies, these three minutes are absolutely loaded with listening pleasure. It should have been a huge hit on both sides of the Atlantic; it’s every bit as good as any other major piece of melodic rock released before 1985. How The Babys failed to make an impact in the UK at this time (particularly with a Lancashire born frontman) is a mystery. In closing, ‘Love Won’t Wait’ brings back something ever so slightly more new wave oriented. Stocker’s chosen rhythms lock into Brock’s drums, quickly providing the heart of another great track and the way the band opts for a completely different rhythm and feel for a more grandiose chorus adds a huge amount of depth. Granted, this isn’t anywhere near as catchy as the album’s poppier songs, but in terms of melodic rock with a slightly sinister edge, there’s a hell of a lot to like – especially Stocker’s lead guitar work which is about as angry as it would ever get.

With the passing of the decades, ‘On The Edge’ continues to sound brilliant; it’s a record with no obvious filler within its thirty one minutes. In terms of flow, pacing and material, it’s a great swansong, and in ‘Gonna Be Somebody’ and ‘Turn and Walk Away’, there was proof enough the band weren’t about to run out of steam in the song writing stakes. Jonathan Cain had replaced founding member Michael Corby for the previous year’s ‘Union Jacks’ LP, but this time around he was no longer the new boy and the song writing gifts he brought to the band definitely helped to elevate most of ‘On The Edge’s best material. A bigger step towards more of an AOR sound didn’t really convince the record buying public, though, and released in an era of skinny ties, Elvis Costello & The Attractions and Squeeze, The Babys’ often very traditional fare had started to fall out of favour. If the release of the record signified the beginning of the end for the band, the tour would call time on their short but wonderful career. The day after John Lennon was shot, John Waite suffered an injury after being pulled from the stage by a fan. After just one more show, the rest of the tour was cancelled and The Babys split. Hardly a fitting last hurrah.

The arrival of the new decade might not have been quite so kind to The Babys as a whole, but this was only a temporary blip. Over the next few years, both John Waite and Jonathan Cain would achieve bigger success. Much bigger success. …And by 1989, both musicians were reunited with Ricky Phillips when three fifths of The Babys provided the core of the million selling supergroup Bad English. In the words of various clichéd AOR songs, what comes around goes around…as they say.