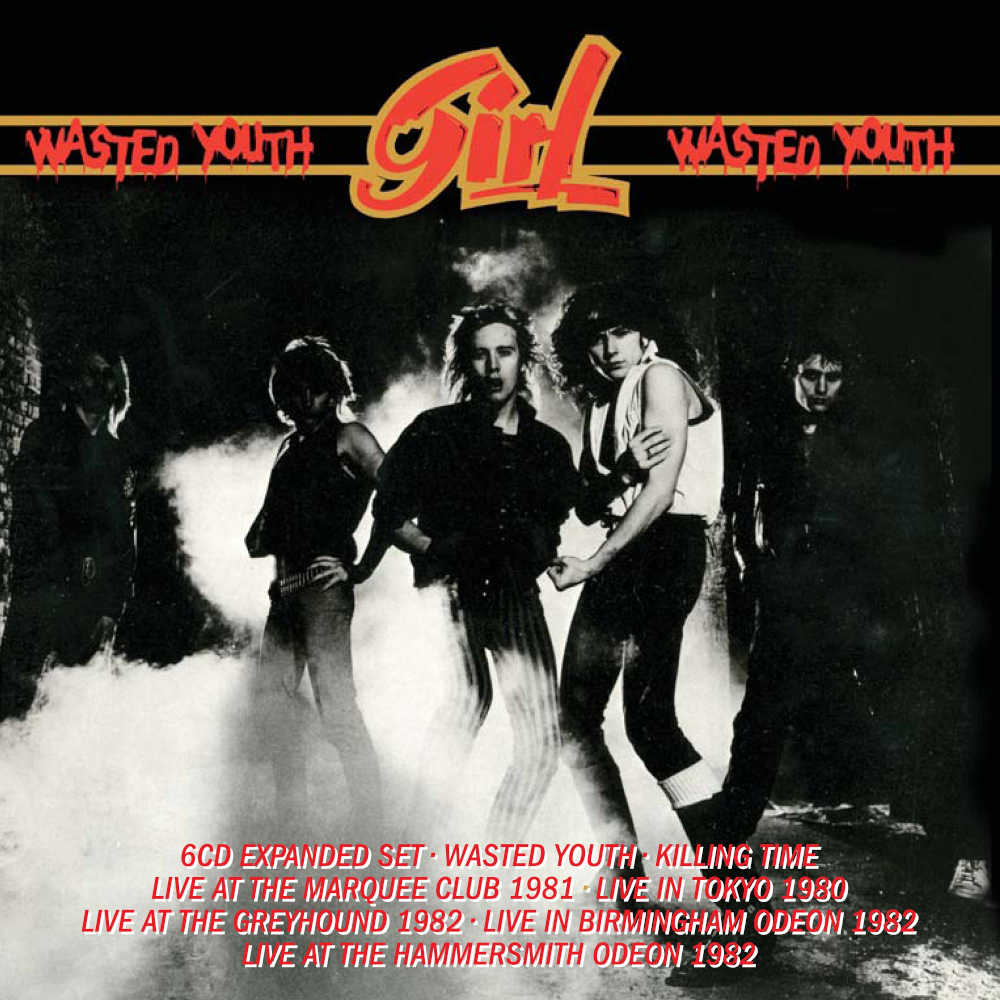 The new box set of ‘Wasted Youth’ capitalises on their live work and includes complete live sets from Tokyo, the Greyhound in Fulham and the now legendary London Marquee.  In addition, the set includes a disc’s worth of other assorted live recordings and a twenty song disc of rarities and leftovers.

More info – including a complete track listing – can be found in the press release below.
A review of ‘Sheer Greed’ can be found here.

A band slightly out of time, Girl formed in 1979, coming to prominence with their debut LP “Sheer Greed” in January 1980. Featuring singer Phil Lewis, guitarists Gerry Laffy and Phil Collen, and joined by Gerry’s brother Simon on bass, they rocked hard enough to capitalise on the burgeoning New Wave Of British Heavy Metal movement that was sweeping across the UK, a scene led by Iron Maiden, Saxon and Def Leppard. Though it’s fair to say that with their pretty boy good looks and make-up, their glam leaning roots would make them a big influence on the “hair-metal” bands of the mid-1980s, but not necessarily with the then more prevalent denim & leather brigade of the NWOBHM crowd.

• Signing to Jet Records, home of ELO, Girl’s debut LP “Sheer Greed” broke into the UK Top 40, helped along by major tours with UFO and Pat Travers, and by lead single ‘Hollywood Tease’, a track that would be re-recorded later in the decade by singer Phil Lewis with LA Guns. With their raw-edged hard rock, their solid debut demonstrated all of the power and energy of one of their raucous live club shows, all captured here with subsequent recordings contained in this six disc collection.

• Produced by Nigel Thomas with the band, second album “Wasted Youth” was released at the beginning of 1982, by which time Bryson Graham had been replaced on drums by Pete Barnacle. This 10 track album features the singles ‘Thru’ The Twilite’ and ‘Old Dogs’.

• The wealth of bonus material included on this anthology kicks off with the 20 track “Killing Time” album on CD2, a collection of outtakes from their two studio albums. Among the originals are covers of Russ Ballard’s ‘Juliet, Ike & Tina Turner’s ‘Nutbush City Limits’ (soon to become a live staple) and the Kinks’ ‘You Really Got Me’.

• London’s Marquee Club was an important stepping stone for any live rock band to prove its (heavy) mettle, having hosted shows for everyone from The Who, Led Zeppelin, Black Sabbath and David Bowie in the 1970s to Iron Maiden, Guns N’ Roses and Metallica in the 1980s. Girl was popular enough with the Marquee to enjoy a residency at the venue during their short career, thankfully captured for posterity here. This 1981 gig, recorded on 23rd October, feature plenty of material from the as yet unreleased second LP, included the aforementioned ‘Old Dogs’ and ‘Thru’ The Twilite’ singles, as well as ‘Ice In The Blood’ and self-explanatory ‘Nice ‘N’ Nasty’.

• One place where they found an appreciative audience was Japan, and the 1980 Tokyo show on CD4 includes the classics ‘Hollywood Tease’ and ‘My Number’, as well as Steppenwolf’s perennial classic, ‘Born To Be Wild’.

• Discs 5 sees the band return to the UK for the slightly less salubrious surroundings of Fulham’s Greyhound in 1982. Like the Marquee, the Greyhound was another important venue for up and coming bands to prove themselves, and the set includes tracks that may well have ended up on a third Girl album, had they not sadly split up later that year.

• Girl would split up in 1982 after the release of “Wasted Youth”, with Phil Collen going on to greater fame and fortune with Def Leppard for their “Pyromania” album and beyond. Phil Lewis would join the aforementioned LA Guns with former Guns N’ Roses alumnus, Tracii Guns. Phil Collen would rejoin Simon Laffy in the band Man Raze, along with Sex Pistols drummer Paul Cook.

DISC FIVE
LIVE AT THE GREYHOUND 1982

LIVE AT THE
HAMMERSMITH ODEON 1982

LIVE AT THE
BIRMINGHAM ODEON 1982