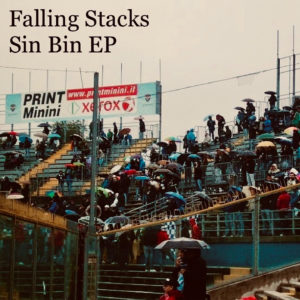 At the beginning of 2019, Falling Stacks broke a long silence with the ‘Sarcastic Clap‘ EP. A collection of angular post-punk sounds that looked to the past for inspiration, it still played in a way that seemed challenging in the present. It would be fair to say that EP wasn’t for everyone. Released just eight months later, ‘Sin Bin’ offers another selection of noises set to thrill lovers of ugly, spiky, guitar driven artiness and frighten the bejeezus out of everyone else.

As before, you won’t find any actual songs here…but if you came to Falling Stacks hoping for hooks, melodies or in any way an easy ride, you were misinformed.

‘Stimulated Patient’ isn’t as busy as some of Falling Stacks’ previous recordings, but that doesn’t mean it’s any less abrasive. Between a live sounding drum and discordant guitar lines, the track seems as if it’ll set up obvious parallels with Sonic Youth – and indeed, at first, the noisier and jarring riffs that subsequently build could be likened to the sonic textures of Thurston Moore and Lee Ranaldo – but Falling Stacks soon create noise that seems even more abrasive. Between the mechanical drumming and bleated, near spoken vocal, listeners might even find traces of influence from John Lydon/PIL and in some bizarre way, even a nod or two towards the wonky noise rock of Girls Against Boys. What there isn’t is an obvious song…and the band seem to truly delight in that, since the number ends with the same off-kilter mood as it began. It also finishes abruptly, suggesting that if someone hadn’t have decided that was enough, this cyclical noise could’ve been without end.

The EP’s highlight ‘House Fire’ is classic Stacks in that it takes repetitive musical themes and an angular post-punk intensity and then creates something that will truly divide opinion. The main riff is hard and simple, more so than the band’s usual style, but it still appears busy. Part of that busy feel comes an upfront bass which almost teases with something funky, but without ever becoming funky, if that makes sense. The resulting repetitious riff sounds like the basis of ‘Black Sabbath’ by Black Sabbath, replayed by Pere Ubu and a jarring vocal reinforces any vague feelings you might have that someone in the band loves David Thomas and his crew. As with the opening track, it doesn’t often deviate away from its original groove, but a heady mix of clanging guitars and crashing drums occasionally attempt to move things away from the obvious musical root, even if very briefly. Overall, it’s got a more robotic feel than you might be used to from this band, but a few plays cements any feelings that Falling Stacks are still keen to challenge.

For those who enjoyed the busier aspects of ‘Sarcastic Clap’ (although the concept of “enjoyed” should be applied with a sliding scale), ‘Assistant To The Paddle Carrier’ will be a tune that’s potentially loaded with goodness. A four minute art-rock noise, it places a rolling bassline against various sheets of distorted guitar, occasionally branching into Slint-esque abrasiveness. At its fastest, there’s a Minutemen-ish playfulness, something often suggested by a frantic drum part. When slowing down, Falling Stacks fall into a cold, mechanical groove that’s very old school. With a little influential help from Can and The Fall, Falling Stacks make their arty noise seem weirdly comforting – provided you’re in the mood for such things, of course. Finally, the heavy drum that drives the largely instrumental ‘Faddy Diet’ continues to echo a lot of classic Krautrock in its repetitive, motorik approach. There are moments where it comes across like Neu! drenched in distortion; other times like another early Public Image assault, but without Jah Wobble’s fantastic dub influences. Within the first minute, its coldness attempts to push away as many listeners as possible, but for those into atonal post-punk, its repetitiousness – not to mention its familiarity – will certainly be alluring. In many ways, it takes the influences scattered throughout the whole EP and uses them with more of a focus.

There are a couple of moments where an odd artiness comes at the expense of almost everything else, but that’s not to say this EP isn’t interesting – it’s always interesting. Fans of The Fall, Slint, Pere Ubu and Cattle should certainly give this a listen since, if anything, ‘Sin Bin’ is even more challenging than Falling Stacks have ever been before. It’s certainly more challenging than most releases by many supposed alternative bands.