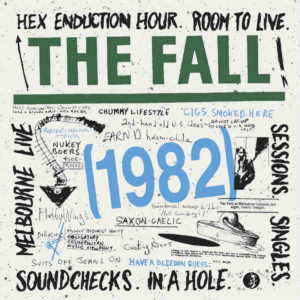 1982 was a very fruitful year for The Fall. They had a semi-stable line up. They had two drummers. And in Mark E. Smith, a brilliant and belligerent front man whose skewed vision of the world was now ready to shape The Fall’s futures and pasts into even more of anobtuse musical animal than ever before. With their third album ‘Grotesque (After The Gramme)’, the band had already begun to move away from the garage punk sounds of their earlier works, but even that album gave little clue as to what would come next.

Paul Hanley, author of ‘Have A Bleedin’ Guess: The Story of Hex Enduction Hour’ and one of The Fall’s drummers between 1980 and 1986, naturally, thinks of the album very fondly.

“One of the things I discuss in Have a Bleedin Guess is the relative merits of a having stable line-up versus the energy that comes with a change of personnel. There’s something to be said for both, and the unusual thing about The Fall is that it because they lasted so long there’s plenty of times where both happened. People understandably go on about Mark’s hiring and firing, but there are plenty of periods of relative stability. The final line-up lasted 10 years!”

With a direct regard to ‘Hex Enduction Hour’, he adds: “I didn’t realise what a grand vision Mark had until I started researching ‘Hex’. I mean I always knew it was a good album, but I didn’t realise just how clever it was until recently” he told Real Gone in September 2019. “Everyone got better at playing, and the enhanced rhythmicality was a natural consequence of having two drummers. We soon realised it was tremendously exciting to do that Motorik thing with two people banging fuck out of their kits! Mark had a singular vision for the album that only really became clear after the event. I think he was definitely moved to make a piece of art, with everything properly interconnected; the sleeve, the title, the length, everything. …And he succeeded! That’s not to say he wrote everything, but the way he ‘curated’ the album by picking what went on it, and where, was brilliant, and never bettered.”

From it’s opening notes to its last gasp, ‘Hex Enduction Hour’ is a chaotic, angry, confusing and vibrant statement. The clattering sounds that motor album opener ‘The Classical’ quickly mark out the record as sounding like no Fall album before; above an engine of noise, Smith rattles off non-sequiters, racial slurs and spiteful call-outs. Its core sound typifies what people instantly think of when they think of The Fall, even though, as Hanley says, “there are lots of Fall records that sound nothing like it.”

As impenetrable as it might seem on first hearing, ‘Hex’ is an album bursting with highlights. The lo-fi ‘Hip Priest’ is a loose bluesy jam that captures Mark rambling about motorway services, drinking and being a freakshow exhibit – not so much written but borne of a moment, it sounds like it could collapse at any second. ‘Just Step S’Ways’ sounds like an ugly approximation of an old Motown hit pulled through the wringer; the raucousness of ‘Mere Pseud, Mag. Ed’ is a welcome throwback to the ‘Slates’ sound and ‘Jawbone & The Air-Rifle’ presents robotic, clanging garage rock that begs to be played loudly. To top it all, ‘And This Day’ fills ten minutes with near empty repetition, yet somehow pulls the listener further into the Fall universe with its sheer audacity than anything had previously. ‘And This Day’ is especially perverse and arrogant. Hanley says: “If you can make it through [that track], everything else is a piece of piss!”

It isn’t quite that easy, but a good chunk of it carries far more melody (a term used in a loose sense), if never quite as much weight. Following Mark E. Smith’s death in January 2018, Real Gone chose ‘Hex Enduction Hour’ as a Fall essential, suggesting that “parts of the album sound like the roar of a three headed mythical beast threatening some drunks on a park bench…at other times it carries a self-destructive spirit, but at no point could [it] ever be considered predictable or boring.”

…And that unpredictable spirit is what’s made it a constant fan favourite and Fall touchstone.

Approached as a stand alone release (as it would have been upon release in September ’82), the subsequent album ‘Room To Live’ can seem disappointing. It’s home to one of the worst Fall songs ever (‘Papal Visit’, featuring MES performing pretty much solo, grinding away on a violin) and has other moments that just seem a little tossed off in relation to the grandness of ‘Hex’. It isn’t without merit – very few Fall albums are, especially those recorded before 2011 – but its good moments seem a little more scatter-shot.

It starts well enough, as he loose garage rock grooves of ‘Joker Hysterical Face’ suggest solid Fall fare combining an obtuse lyric name-checking 3-2-1’s Ted Rogers with a treble drenched, repetitive half-tune that occasionally feels like a throwback to the ‘Dragnet’ years, while the frenetic ‘Marquis Cha-Cha’ captures The Fall mk. 5 in a funky mood. The true stand out from the album, a dual drum set up really adds to the groove, but it’s bassist Steve Hanley’s huge sounds that glue it all together. The title track is also reason enough to add the album to your collection, as it is a prime example of The Fall putting their own skewed and arty slant on some great rockabilly sounds. Also opting for something a little more straight ahead, ‘Solicitor In Studio’ is an enjoyable slice of garage rock, showcasing a great rhythm section and various keyboard noises that hark back to ‘Live At The Witch Trials’.

Beyond that, ‘Room To Live’ wears thin…and pretty quickly. ‘Hard Life In The Country’ is a hollow sounding affair with a particularly loose approach. A repetitious dirge, the guitars lock into a high pitched atonal noise throughout and a more minimalist approach to the drums means it doesn’t really go anywhere…and it takes six minutes to not really move on from its initial thirty seconds. At best, it could be viewed as an indirect influence on Sonic Youth, but the invention and bluster of ‘Hex’s best moments are nowhere to be found. ‘Detective Instinct’ sounds like a demo for a soundtrack for a grubby noir film, albeit a tune with a drawling narrative – being kind, it’s a reasonable track, but its stripped back nature makes it feel frustratingly incomplete and ‘Papal Visit’ really seems as if it were recorded merely to flesh out an already anaemic album. A full five and a half minutes of a man who can’t play the violin, scraping away incessantly to create a backdrop for a spoken monologue that isn’t even especially audible? No thanks. It’s easily the worst thing on a Fall album before the release of ‘I Am Kurious Oranj’ in 1988.

It’s an album Hanley believes works much better if approached as a companion listen to ‘Hex’ and as such, its best bits actually sound better as part of the bigger picture presented by this set. “My opinion of it is coloured by the awful atmosphere in which it was recorded”, he muses, before adding more positively: “Mark loved it, though – I know that!”

Of course Mark loved it. He was ever the contrarian. He was lots of other things too, but he never appeared to be someone who’d follow with popular opinion. Maybe this box set will encourage fans to re-evaluate the album. Maybe it won’t. In some ways it’ll always be the oddity lurking between the essential ‘Hex Enduction Hour’ and the more accessible (and brilliant) ‘Perverted By Language’.

The year’s gruelling live schedule is more than represented within this 1982 box with the twenty two track version of ‘In A Hole’. Again, if you already own the Castle Communications edition from 2008 there’s nothing new to be had and there are more exciting Fall live recordings out there, but to help give a more complete picture of the period, it’s a very important addition to this box.

For the fans, it’s the other live set that’ll be of the most interest. Having circulated on various iffy bootlegs and a couple of rough semi-official CD releases, ‘Live To Air – Melbourne ’82’ does a better job of capturing the raw energy in the band’s live set at the time. The source used here is still lacking in any warmth or bottom end, but is streets ahead of the Fall bootlegs included in the previous ‘Witch Trails’ and ‘Dragnet’ sets. Particularly punchy performances of ‘Lie Dream of Casino Soul’ and ‘Solicitor In Studio’ capture a real garage rock aesthetic; ‘Marquis Cha Cha’ is by turns funky, slightly inebriated and a bit frightening. Stripped of extra saxophone and with extra angular guitars, ‘Room To Live’ comes across like a rockabilly call to arms. There’s not much from ‘Hex’ – things had already moved on – but an angry and grumbling ‘The Classical’ sounds like the archetypal Fall live performance: sneering, grinding and wonderful, it’s made even better by Steve Hanley’s bass turned up to eleven…possibly even further. If you’ve not heard it – the previous CDs aren’t always the easiest to find – it’s the best and most perfect excuse (if one were needed) to buy this box set.

With various Peel Sessions and tour rehearsals and stray live tracks joining four albums, ‘1982’ is a fine addition to Cherry Red’s Fall Sound Archives series. The larger format box set packaging gives the material an extra feeling of grandness. It doesn’t include anything that hardcore fans won’t already own – save for a box and a poster – but as an item in and of itself, it’s great. It’ll be the more Fall curious who’ll benefit the most, of course, since ‘1982’ is a wonderfully comprehensive insight into The Fall during their first major peak.

For those people, it will offer more than just a listen. It’ll be an induction; an education.

With thanks to Paul Hanley.  ‘Have A Bleedin Guess’ is available from Route Publishing.