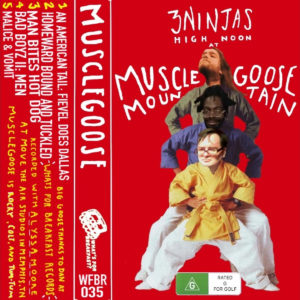 At the band’s most extreme, Musclegoose’s songs barely get beyond brief bursts of musical ideas, as best demonstrated on the particularly punchy ‘Bad Boyz II: Men’. On this forty second blast, the band set about some fine hardcore punk that kicks off with a grinding riff that’s never a million miles away from something from side one of Black Flag’s ‘My War‘. Its collision of guitar and heavy bass driven noise suggests something powerful from the off, but instead of using that to their full advantage, Musclegoose merely repeat the musical refrain a few times before deciding to move on. It manages to sound like more than a mere distraction, though, thanks to a great hardcore growl of a vocal that instantly reminds of the brilliant Vultures United. Despite having no intention of being clever and valuing force over complexity, it quickly shows the makings of quite a powerful garage punk band. Taking their core sound to even further extremes, ‘Homeward Bound & Tuckled’ introduces some really shrill guitar work – so obviously derived from Greg Ginn‘s unmistakable style – before launching into a full-on thrasher that’s a side step from early Circle Jerks. Again, while the music doesn’t especially stand up to any kind of scrutiny, it’s a fine homage to hardcore’s late 70s/early 80s origins.

For those who’d hope this hardcore band might stretch to something more of a tune, ‘Malice And Vomit’ is worth the price of purchase alone. The intro features a fantastic bassline – in this case a dead ringer for Chuck Dukowski’s finest works – which leads into a full scale hardcore workout that’s as much a love letter to the early 80s DC scene as an inspired slab of silliness. During these almost epic three minutes, the band latches onto a really tight riff at first, where speed is of the essence and the guitars alternate between fuzzy thrash and shrill surf noises. With those riffs underpinned by a solid drum part and also joined with a classic sounding hardcore vocal, that would be enough to sustain a full number. However – possibly to make amends for a couple of the other tracks feeling like musical sketches – the band eventually steers this track into unexpected territory, as they slow right down for a crushing instrumental break that reinforces the power in the guitar and drums. As before, you’d have to be pretty ignorant not to recognise the love of Black Flag at the heart of most of the guitar chords, but decades after ‘My War’ and ‘Damaged’ hit the shelves, this brand of hardcore still sounds like something with massive brass balls.

Somewhere between the two extremes, ‘An American Tale: Fievel Does Dallas’ ruins childhood memories for a generation by splicing cartoon rodent adventures with a seventies porn romp. Luckily, moving away from whatever imagery that dares to conjure, it’s another number that’s ripe with shredding guitars. The bass anchors most of what passes as a melody, but instead of sounding like flat-out Black Flag homage, a lot of the more garage-based shredding feels a lot closer to the rawness of the first two Screeching Weasel albums. Taking a brief moment to push the drums forth, there’s more than a suggestion of musical tightness with the rhythm rattling out a couple of furious riffs, but the lasting impression is left by the vocal. It’s likely that no matter how many hardcore punk albums you’ve heard since 1979, you ever expected “Fievel’s coming…1, 2, 3” to rank among the catchiest punk hooks! Injecting a little garage blues to keep things feeling at least halfway varied, ‘Man Bites Hot Dog’ uses its slower moments to show Musclegoose’s talents beyond the most obvious punk, when a very 60s influenced lead guitar holds a great presence against the kind of riff that would suit The Kingsmen and Paul Revere. True to form, though, these garage sounds are interspersed with the fastest punk bursts and a chorus that just repeats “I wanna hot dog” over and over because, y’know, Musclegoose are keen to be thought of as…a bit silly.

Despite what first impressions want you to think, though, this is actually great. As proven by bands like Angry Snomans with their novelty xmas punk discs, to make your audience accept a little silliness, a band needs to be able to not just play well but be able to be somewhere near the top of their game. Musclegoose obviously know this too and, as a result, ‘3 Ninjas…’ is a an enjoyable slab of hardcore. It seems rather perverse than the final mix sounds better than most Wirms recordings, but if this makes a few people backtrack and give those a listen too, then this EP’s work is done…