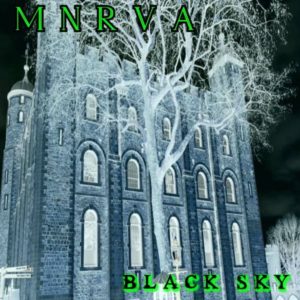 Formed in South Carolina in 2018, MNRVA brings together the talents of Arcane vocalist/guitarist Byron Hawk and Iron Fist’s Gina Ercoli and Kevin Jennings (drums and bass, respectively) to create an uncompromising sludge metal power trio. Often showing an unhealthy early Melvins and Electric Wizard obsession, their main concern on this debut EP is taking some really heavy riffs and slowly bludgeoning their audience. As heavy as a very heavy thing, of course, that results in a timeless doomy, sludgy and sometimes uncompromising sound that fans of the style will love.

The way ‘Not The One’ opens with an ominous bluesy howl set against a deep grumbling bass suggests very quickly that this EP isn’t going to be frivolous or throwaway. Bringing in sludgy guitar sounds and a funereal tom, MNRVA assert an impending doom, but once the riffs intensify, their love of classic sludge becomes very clear. Hawk’s slow and heavy guitar sounds remain a dominant force, but with his preferred vocal growl taking on a Buzz Osborne inspired edge, the band never hide their love of early, pre-‘Houdini’ Melvins works or how they’ve drawn influence from a world of underground doom acts. The over familiar style is still enjoyable, especially since MNRVA play with such conviction. The early blues howl returns for a slow and assured solo – Byron Hawk isn’t a flashy player by any means, but definitely knows how to fill space – while Ercoli’s drums punch through as if from the end of a corridor. It’s predictable and traditional, but with this track, the band more than make their mark…and from here, the rest of the EP really gathers momentum in terms of riffs, if never speed or any kind of buoyancy.

The six minutes of ‘No Solution’ bring much more of the same, but introduce a slightly harsher rhythm guitar sound throughout. That guitar’s chief intent seems to be drowning out the finer points of the vocal, but Hawk steps up with a devastatingly loud performance throughout. Gina keeps a steady beat while Kevin appears to be using his bass in a percussive way to pierce through the wall of noise by giving the bass drum some extra power with his four strings. Eventually moving from an Electric Wizard/Melvins-esque sludge, there’s a brief interlude where MNRVA sound as if they’re about to tackle the heaviest version of Sabbath’s ‘Wheels of Confusion’ ever, but bizarrely nothing actually comes of that; instead they return to the original riff in order for Hawk to lay down a bit more fuzz and tease with a Tony Iommi influenced solo that’s buried so deep in the mix, it really gives an insight into how loud the recording sessions must have been. In terms of bluesy sludge, this is great, but MNRVA are about to reach even deeper into themselves for an even better final track.

For their third act, MNERVA wisely dispense with any pretence of anything other than pure doom and unleash a near seven minute epic in the title track. The guitar riffs come with the weight of at least three stoner acts combined; the gravelly vocals move closer to the earlier recordings of King Buzzo Osborne in the way Hawk uses his voice to churn out full scale drawls. The guitar riffs, meanwhile, invoke the very best in Electric Wizard and their ilk when it comes to pummelling the listener with a pounding rhythm set against a heavy, almost tar-laden sound. Obviously, it is always more about oppressive riffs than songs, but the way the band have chosen to repeat a couple of lyrical refrains throughout at least suggests there’s a song fighting its way through the by now familiar swamp. It all sticks rigidly to genre conventions, but therein lies the magic – fans of traditional sludge metal will almost certainly take to this from that all-important very first listen.

Tried and tested it may be, but these three tracks still bring plenty of entertainment if you like heavy doom, moderate sludge and bands that so obviously love Melvins’ ‘Gluey Porch Treatments’ and Kylesa. For fans of old Amphetamine Reptile and Man’s Ruin stuff, as well the more contemporary sounds from Sludgelord Records, this is an invaluable collection filler.