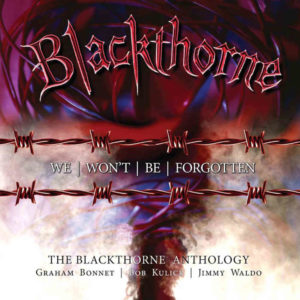 Whereas the bonus materials on the two reissued albums were often geared towards lo-fi live material taken from audience sources, many of the unreleased cuts here are taken from the band’s own archives. As you’d expect, a few of the recordings are pretty rough – though never as rough as some of the live tapes that have previously circulated. Most importantly, fans are treated to a few 24-track demos along the way. These three discs really do show off each stage of various works-in-progress.

On the first disc, the previously released cuts appear with a three previously unheard demos. The most enlightening is a rough and ready run through of a track called ‘Man In A Black Hat’. Labelled only as “Early Demo”, it actually comes from the recording sessions for the shelved second album. Even in demo form and with drum machine in tow, it shows a number with a lot of fire. Despite those mechanised rhythms and a fade disguising an end yet to take shape, the guts of the track are potentially better than anything that appeared on 1993’s ‘Afterlife’. Bonnet’s in full on bellowing mode which won’t sit well with everyone, but even his most bombastic approach can’t disguise the fact that Bob Kulick has almost perfected a great hard rock melodic metal guitar part. From a similar period, ‘Judgement Day’ taps into a huge riff – part grungy, part power metal – and although listeners are only given half a song here, there’s something appealing about being able to eavesdrop on this session. A demo of ‘Sanctuary’ offers an alternate lyric, but any chances of this seeming like an undiscovered gem are hampered by a very loud and intrusive drum machine. There’s some pleasure to be had from hearing guitarist Bob Kulick working so hard at this stage of recording, though – his horsey squeals throughout this particular take are terrific – but that won’t be enough for new listeners to have any interest.

The real meat in this anthology can be found on the second disc via a selection of earlier demos, most dating from 1992 while the band were working on ideas for the ‘Afterlife’ album. Regardless of how ‘Afterlife’ eventually turned out, there’s some really good stuff here. The ’92 demo of ‘Baby You’re The Blood’, especially, runs rings around the final version. With Bonnet sounding strong and a selection of backing vocals pushing for more of a melodic rock angle, everything sounds so much more natural than the general bluster of the final album take. As one of the demos where Jimmy Waldo’s keys come through, it sounds a lot like an old Alcatrazz number and it’s good to hear Blackthorne cutting loose on something with more of an AOR feel. It’s definitely suggests that something went awry with the final album mix, as the only thing that’s improved on the album version is the vocal. Almost everything else on the LP sounds too thin – especially Kulick’s main riff. This demo (tagged as #2) sounds almost like a finished product and is definitely worth having. Although quite rough, the demo of ‘Love From The Ashes’ has the root of a great vocal from Graham, especially during the pre-chorus sections. While there’s a lot of bombast here and it’s naturally rougher than the finished product, there’s something about it that suggests another decent idea eventually got smothered. Pushing Kulick’s dirty guitar sound to the fore along with a really huge bass sound, the ’92 demo of ‘Over & Over’ sounds like something that should have been a four minute masterpiece, but much like ‘Love From The Ashes’, the final version sounds too sedate, musically speaking, without the vocal adjusting accordingly, which just has the unfortunate effect of making Bonnet sound like he’s stretching his voice too far. In this unfettered early recording, the sheer volume of everything – especially the bass – is just so much better suited to that vocal. If you’ve ever had any time for ‘Afterlife’ (very much a “Marmite album”), you’ll certainly want to hear this.

While most of the ’92 demos should please the more curious fan, the most interesting recording to surface is actually an unreleased song. ‘Get My Heart Out of Here’ is a solid melodic hard rocker – very Dokken in style – where Bob Kulick sometimes plays with an uncharacteristic swagger. The verses suggest a great track in the making, but an instrumental break – still due to have a guitar solo added – switches to a really grungy tone, as if pre-figuring his brother Bruce’s work during Kiss’ ‘Carnival of Souls’ sessions. It sounds a little uneven, but given time, Blackthorne might have come up with a winner. Despite Bonnet often tackling so much Blackthorne material at full pelt, this demo finds him in classic voice, much closer to the best Alcatrazz stuff. In terms of unearthed demos, this is pure gold. Also of massive interest to huge Bonnet fans is a Blackthorne demo of Rainbow’s ‘Since You Been Gone‘ which was obviously sidelined in favour of ‘All Night Long’ during the recording of the ‘Afterlife’ album. Kulick’s guitar work doesn’t have the flair of Ritchie Blackmore’s, but he still turns in a fine solo and has a good stab at reworking the riff in his own more metallic style. Waldo’s organ work is heavy, sometimes giving the very familiar song a different slant…and Bonnet sounds great. Greater, in fact, than he does on so many of the previously issued Blackthorne recordings. There’s a reason for this – his vocal was added in 2018. Presumably he’d had enough time to listen back at the old Blackthorne tapes and realise how much he over sang everything at the time. Anyway, warts and all, and regardless of the latter-day tinkering, this is really nice to hear.

It’s not all great, of course. An early demo of ‘Twist The Blade’ with Bonnet wailing and grumbling against a drum machine will certainly be for hardcore fans only and even those might only find this interesting for one or two listens. Similarly, the demo of ‘We Won’t Be Forgotten’ merely presents an old style metal act going through the motions…but very loudly. Much like the album take, you’ll either love it or hate it, but there isn’t always much to get excited about.

The lion’s share of the third disc is for completists only, since it offers a few things that are designed only for the hardcore fan. Various rough mixes of ‘Afterlife’ tracks – basically sounding like a finished product before the last bells ‘n’ whistles are added – fill the first half and most of these aren’t greatly different from recordings you’ve owned for years. There’s one exception: the rough mix of ‘Baby Your The Blood’, once again, shines like the jewel in the sessions and here, it sounds like the album version…but with the mix it should have had. It makes disc three worthwhile, even though there’s a fair amount of less essential padding. A twenty two minute rehearsal tape has a bootleg quality and is dominated by a really distorted sound; different vocal takes of ‘Skeletons In The Closet’ really don’t add too much to the overall picture and a rough mix of ‘Sex Crime’ is as horrible as you’d expect. The disc closes with another solid addition, though – an instrumental demo of ‘Since You Been Gone’. Presumably, this is the same take that appeared on disc two before the newly added vocals were added. It’s rather pleasing to hear the instrumental run through and hear the tape as intended, especially with Kulick in reasonable form.

Far more than a flash in the pan but much less than a global success, Blackthorne are not often thought of as being much more than a footnote in the respective careers of its band members. HNE have worked hard to give them more exposure. That said, had this anthology been a twenty track set with various album tracks joined with a few rarities, it still might have represented “The Best of The Worst” with regard to Graham Bonnet’s sprawling discography. Somehow, though, when Blackthorne are presented in demo form, they sound so much more interesting – surely proof enough that the idea of Blackthorne was always more interesting than the reality. The fact that this three disc box is so weighted towards unreleased material definitely makes it an an interesting set for the more obsessive Graham Bonnet and/or Chuck Wright fans. For most other people, naturally, even with a few archive gems waiting to be discovered, this box won’t be a priority – for those listeners, a purchase of Graham Bonnet’s ‘Anthology: 1968-2017’ would certainly be a far more sensible option.