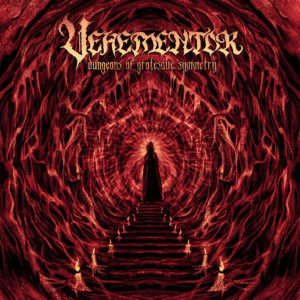 Although on the surface Vehementor’s debut ‘Dungeons of Grotesque Symmetary’ looks like the kind of record aimed squarely at the dyed in the wool death metal fan and pretty much no-one else, the reality is somewhat different. On this album, the Macedonian band mix all manner of extreme metal influences. Huge amounts of melodic death and classic thrash metal meet elements of groove metal and occasional industrial-ish rhythms, resulting in one of the most enjoyable – and filler free – extreme metal discs you could hope to find.

Vehementor seem to recognise the value of breaking listeners in gently, since throughout ‘Reaper’ they manage to combine a fairly old fashioned metal sound with moments of extreme heaviness and pneumatic rhythms. The combination of old melodies and intensive riffs isn’t new, but it’s something the band do brilliantly, even creating a sound that manages to feel very Swedish despite their locale. Within these three minutes, you’ll find some well executed twin leads (obviously multi tracked as there’s only one guitarist), an enthusiastic guitar solo and other melodic charms going head to head with a melodic death metal vocal, resulting in a really punchy opening statement. The opening of ‘Lay Low Stay Down’ reinforces a desire to mix things up by opening with the kind of groove-oriented riff you’d find on a guitar instrumental album from the Shrapnel or Relativity labels back in the 90s. With the arrival of another aggressive vocal from frontman Darko Nateski, there’s a switch to melodic death metal for the verse, but as before, the band really know how to get the best out of such extreme riffs, while still keeping an ear on a melody. It’s an intense melody, sure, but in metal terms there’s a lot to love. At the point where the song’s intro has started to fade in your memory, that introductory riff makes an unexpected return and is used brilliantly to underscore another very late 80s sounding solo. ‘Notorious’ turns up the heaviness a little more, with the riffs often settling for a classic thrash sound set against a death metal infused vocal that’ll be make of break for some listeners. If you can just focus on the music, though, it’s so rich in textures; the chorus sets a slightly proggy, clean toned guitar against the fearsome growl and the featured solo takes an unexpected detour with plenty of two hand tapping sounds. At this point, it becomes even clearer that Vehementor are among the best at their chosen style.

Opening with various nods to classic thrash, ‘Hate’ lends the album its most obvious throwback to the early 90s with something that wouldn’t be out of place on Sepultura’s ‘Arise’ LP. Unlike a few other tracks, there’s much less of a temptation to switch to more of a death metal sound as the track progresses, instead showing guitarist Nikola Peyoski locked into his riffs more than ever before. It may not be anything new, but the tightness in the overall arrangement is very impressive. ‘Cursed Sensation’ offers a fantastic and quite simple groove metal riff, which the band use as a springboard for heavier choruses based around some finely crafted death metal. The death metal aspects are flawlessly played, but it’s definitely the verses that are of the most interest here. The way the main riff chugs almost feels like experiencing Lamb of God covering White Zombie’s ‘Thunder Kiss ’65’…and it’s none the worse for that, obviously. Throw in a complex, clean lead break and an enthused vocal and this becomes this becomes a definite stand out, while ‘No Way’ drops into some fairly straight but intensive thrash, filling an enjoyable three minutes. Although Vehementor offer more interesting tunes on this release, it’s still worth noting that the lead guitar work often lurking beneath the crushing rhythms is excellently played.

Both ‘No Way’ and ‘When Death Is Near’ add a couple more great thrashers without really adding anything new to the record as a whole, but the album’s final pairing finishes ‘Dungeons…’ very much on a high. For fans looking for something a little closer to classic sounding extreme metal, ‘The Stronghold Is Yours’ will be an instant favourite. With a full compliment of triggered drums, occasional hints of metalcore and a massive riff, it has the foundations of something enjoyable right from the opening bars. As the number progresses, the heaviness really asserts itself against a black metal inspired vocal giving a great crossover sound. The inclusion of a couple of really old school lead breaks balances the heaviness with some instant melodies, not to mention a very Swedish feel. For fans of In Flames at their heaviest and Soilwork at their most direct, this is well worth an ear. Moving seamlessly into the closing number ‘Burden’, the band’s jagged riffs take on an even more pneumatic stance for increased anger. As with most of the album, though, it isn’t as cut and dried as that and in this instance, there are nods to prog metal and even the occasional throwback to Fear Factory in their ‘Dehumanise’ days for a few solid grooves along the way. A fine way to end a thoroughly enjoyable album.

In terms of mixing very heavy riffs with some very obvious lead guitar melodies throughout, this album hits the spot almost constantly throughout its thoughtfully succinct half an hour. The vocals will be a deal breaker for some listeners, naturally, but even those – as forceful as they are – are scaled back just enough for most of the lyrics to be appreciated. In terms of extreme metal crossovers, you’ve possibly not heard anything this good since you first discovered Entombed back in 1990. For lovers of the style, it’s a disc not to be missed.