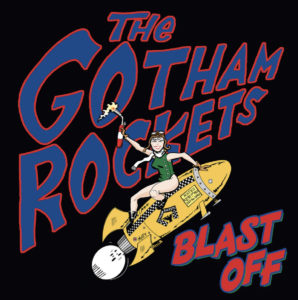 The lead track ‘Bad With Girls’ starts the EP with a real intent. That said, for the first ten seconds or so their potential – and the impact the whole release will eventually have – isn’t that clear. The recording opens with a cheesy spoken word element and the subsequent guitars sound half buried or as if they’ve been sourced from an old demo cassette. Soon enough, though, once the whole band breaks through on the arrangement, it’s clear that this is a fantastic track. The guitars launch an assault somewhere between timeless bar-room rock and late 70s power pop, the rhythm section are really punchy and the presence of a Clarence Clemons influenced sax throughout (courtesy of the very talented Steve Greenfield) helps to stoke up feelings of good times. Add to this a vocal with a southern drawl – never a million miles away from Molly Hatchet’s Jimmy Farrar – and it’s a potent mix. …And that’s before the 70s styled female backing vocals kick in. This is a real melting pot of retro sounds. With almost everything coming across in an extremely confident way, that should be enough to win this band a few new fans straight out.

The release’s other three numbers carry a similar energy. Following a few muted chords that would suit the young Rick Springfield, ‘What’s Done Is Done’ makes no attempt to hide the love for Springsteen. It pretty quickly asserts itself as a tune very much inspired by The Boss’s early numbers ‘Rosalita (Come Out Tonight)’ – something very much reinforced by some great sax – and ‘Seaside Bar Song’. What’s evidently clear is that The Gotham Rockets are loving every moment. A later bridge involving handclaps and the return of the muted chords adds a little more power pop, but it’s still a good old rock ‘n’ roll tune at heart…and easily the EP’s highlight.

‘Rip This Night’ delivers more big thrills via a solid rock ‘n’ roll rhythm coupled with a few garage rock guitars. The slightly rougher approach is very deliberate since the verse is a direct descendant from Eddie Cochrane, but there’s a little more of the Rockets’ love of melody creeping in on the chorus. It’s already a solid effort, but once the sax punches through for a high octane solo, it goes from good to great. ‘Nothing But A Man’ takes a sidestep into r ‘n’ b, at first aping ‘Keep On Running’ before dropping into a fierce soul banger with some very hard edges. Frontman Matt Langone summons a very enthusiastic gruffness in his chosen vocal style, and this contrasts nicely with a selection of backing harmonies. Ensuring this has as full a sound as possible, those harmonies are the kind that could easy be inspired by an Stax recording or one of Elvis’s legendary ’69 Vegas shows. As always, the use of brass is key to the overall brilliance, but the way Mighty Joe Vincent locks down the groove with a solid drum part and Scott Kitchen’s bass punches through at almost every turn really highlights the band’s sense of focus. If this doesn’t move you, you’re dead inside.

Simply put, this is brilliant. In a world dominated by bad political decisions, environmental destruction and a complete disregard for gun laws and public safety, we all need a little fun…and The Gotham Rockets very much want to facilitate that. For approximately fourteen minutes, here is a band that openly invites everyone to cast aside their worries, and if you have any time for early Springsteen, great 70s pop driven by enthusiastic sax or high energy pop-rock, ‘Blast Off!’ will, indeed, be a blast. It’s easily one of the most uplifting things you’ll hear for a good while.