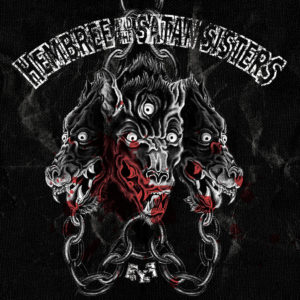 Following a spoken word intro that sounds like a sermon given by Yosemite Sam, ‘Fuck Your Religion And Fuck Your Politics’ introduces the band in the most unsubtle way they can muster. Heavy muted chords play at speed while a drawling vocal accentuates a southern attitude. Within a few seconds, Hembree And The Satan Sisters sound like Rob Zombie fronting an aggressive punk band like Good Riddance…and then just as quickly as that sound embedded itself, the main melody springs forth in a Sick of It All like manner. In just fifty seconds, the band lays down an unshakable hardcore riff which, combined with less than subtle lyrics, recalls that first time you heard Zeke or spent time laughing at Butt Trumpet.

Injecting a little more metal into the sound – as is sort of expected from musicians with such a background – ‘Devil’s Warning’ takes an old NWOBHM style riff and pumps it with extra speed. A cleaner lead guitar gives the music a stronger sense of layering as the tune progresses, but in the main, it’s all about the speed. Joining some great music, Hembree delivers another scratchy hardcore vocal and in doing so, this number straddles the line between punk and classic metal in a really cool way. If anything, it often makes the band sound like a rougher version of Supersuckers. Taking the punky bits and applying them to a hard and driving riff, ‘Say It To My Face’ falls somewhere between Motorhead and Fu Manchu. Hembree then shouts his way through various clichés centring around the unsubtle message of “say it to my face, motherfucker!”. It avoids being a dud thanks to some solid playing throughout, with the lead guitars holding up particularly well – it’s very much a case of great music, terrible lyrics, but will still deliver fun for less demanding listeners.

Changing tack again, the more commercial ‘Nothing To Prove’ sounds like a cross between a harder Ramones crossed with a skate punk band, before dropping in the kind of chorus Sick of It All would have delivered during their ‘Built To Last’ commercial peak. Throw in a humorous, self-depreciating lyric regarding a musician who knows he’s sloppy and it’s all great fun. After a couple of hits from a very big chorus, the band takes a sidestep to flesh out the already great track with a few twin guitar sounds and a few extra whoas – all of which go a long way to making this tune really stick. Finding the Satan Sisters reaching peak rawk ‘n’ roll, ‘Rape This Land’ opens with a barrage of distorted voices via a sample from the 2017 TV series Godless before descending into a punchy tune that sounds a hell of a lot like a punked up Fu Manchu – something reinforced by a southern inflected vocal – before the nasty ‘Dancin’ At Your Suicide’ presents a massive blight on an otherwise great EP. Using the intro to branch out with a little 50s influence and then going headfirst into a Misfits-esque banger, complete with echoing voices, there’s a feeling this should’ve been great. It’s definitely another example of the band playing to their musical strengths. However, it’s a case of great tune/nasty lyrics with ugly gender swaps set out to shock in a Danzig inspired schlock horror way. It might have been funny in 1980, but by 2019 it’s just crass. In terms of homage, its very loving, but very hard to listen to. Finally, things return to form with some really serious speed driven hardcore. The resultant ‘Who’s Laughing Now’ is another genuine highlight, as Zeke influenced riffs collide with gruff vocals and intensive punk ‘n’ roll lead guitars. By shoe-horning in clean vocal melodies on a simple chorus, it shows how the band are more than just punky noise merchants and that someone knows how to get the best out of a sharp arrangement. In less than two minutes, this track sweeps away any bad feelings left by the previous number and is a definite reason to check out this (mostly excellent) release.

Nine tracks, seventeen minutes…and out. These Sisters don’t hang about. ‘Dancin’ At Your Suicide’ not withstanding (skip buttons are handy things), this release is great. It’s just as much about the band having a blast entertaining themselves as much as their audience. For anyone who loves a good, honest punk/metal hybrid or speedcore riffs and sweaty attitudes, there’s some good, dirty fun to be had.