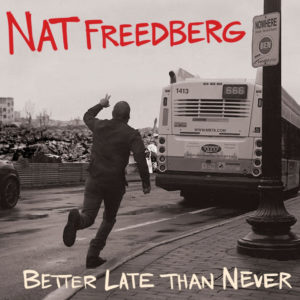 A cult hero from Boston, Nat Freedberg has recorded with The Titanics, The Clamdiggers, The Flies…and likely lots of other acts labelled with the definitive article. Always a champion of a natural sound, his best works have a very old spirit and the best bits of 2019’s ‘Better Late Than Never’ could stand alongside Strange Majik in terms of exuding an all-round retro cool…at least on musical terms.

After hitting the play button, it takes at least ten seconds before the unsuspecting listener is whipped into s hurricane of musical throwbacks, leading to a suspicion the next forty minutes to be something to savour. The lead track ‘Devil Rockin’ Man’ suggests a future classic in an instant in the way it sets up a groove that’s half ‘Let It Bleed’ era Stones and half soul-rock grooviness. The steady pace is wonderfully sullen and a retro guitar is all important, but if anything shifts this towards the classic status it deserves it’s the extensive use of bluesy electric piano throughout, used tastefully alongside a shameless application of gospel vocals and some sleazy sax. With such great music at play, it’s a pity that Freedberg insisted on singing himself. Faced with the kind of music that should have had a vocal full of sass and grit, Nat rarely raises beyond a nasal-ish mumble-whine, reminiscent of Dylan during his late 80s phase crossed with the hazy grumble of Keith Richards. Still, if you can make it past that, this is superb…and the rest of the album has enough to recommend it, even if things never quite generate as much excitement.

If the electric piano coolness of that opening number floats your boat, then the semi-ballad ‘If That’s The Way You Want It’ should also appeal with its retro keyboards leading the way through a soft, almost languid number that takes the sounds of Ace, roughs them up, adds a little Faces magic and leaves the listener with something that really suits evening listening. Something else that comes through here is Nat’s ability to drop a simple hook. Whether that hook comes musically or lyrically, it’s always so, so natural – and here, perhaps more than anywhere else on the record, his song writing shines…and it’s easy to forgive a love it/hate it vocal style. The title cut falls somewhere between the bar-room rock of fellow Bostonians Watts and a half remembered 90s radio filler. With guitars cranked to the max, Freedberg stomps effortlessly through the next few minutes, allowing a ringing guitar to create a fine musical hook. Perhaps more than before, his voice feels a little out of step with the relative polish of the music – enough to hamper enjoyment, even – but thankfully his band are in great shape and these four minutes stir up some fine riffs and punchy sounds. During ‘Only Takes A Minute’, Freedberg unleashes more love for Keith Richards and Izzy Stradlin on a grubby rocker that’s big on sleazy vocals and 70s haziness. Although his voice isn’t the sharpest, he manages to pull a huge hook from a couple of repeated phrases and a few plays suggests that this tune is very much a rough diamond.

Giving the middle of the record a huge lift, he short and punchy ‘World To Come’ hits like an unholy hybrid of early Black Crowes and late period Replacements and with an increase in both volume and pace, Nat’s voice actually sounds more at ease, but even his best efforts are outshone by a few pointed lead guitar breaks. It never tries to be different or clever, but much like Watts at their best, there’s a lot of enjoyment to be gleaned from these rock ‘n’ roll vibes, before another Izzy Stradlin/Gilby Clarke-esque workout hits via ‘Madame Butterfly’, a tune that blends Stones/early Aerosmith grit to a semi-psychedelic hook. This gives the album another track that stands equally alongside the opener in terms of all round enjoyment. Also cool, ‘Queen For A Day’ is a tune full of swaggering, bar-room cool and it’s impressive how Freedberg has (seemingly unknowingly) taken a vocal melody that sounds like it could slide into Eddie Money’s ‘Two Tickets To Paradise’ at any second and underscore it with a whole world of guitar work that would make Tommy Stinson proud. The brilliant electric piano is nowhere to be heard, but in many ways this track provides a fine snapshot of Freedberg’s no-frills, retro talents.

Elsewhere, ‘If I Could Be The One’ takes Freedberg’s favoured bar-room sound and peppers it with something a little bluesier, coming back like a deep cut from The Black Crowes’ ‘Amorica’ and the slightly bizarre ‘Heavy Metal Cow’ applies some bizarre lyrics to a ‘Mystery Train’ influence drum shuffle and country rock guitars throughout. It’s a great tune, but lyrically it’s far from the best thing you’ll ever hear. Nevertheless, Nat and his assembled band sound tight enough and that’s enough to see it through. In time, ‘If I Could Be The One’ could elevate itself to being one of three or four stand-out tunes, but ‘Heavy Metal Cow’ will never be any more than throwaway jollity – but, then again, that was likely the point.

Overall, ‘Better Late Than Never’ isn’t short on timeless ideas, assuming you love unpretentious retro rock. It’s an album made with love and one that very much hopes the listener will go along for the ride with volume cranked. There are plenty of times where it would benefit from a different vocal, but between some solid song writing and a some high spirits, it’s got a lot going for it…even if it’s not always quite the classic the opening track promised it would be.