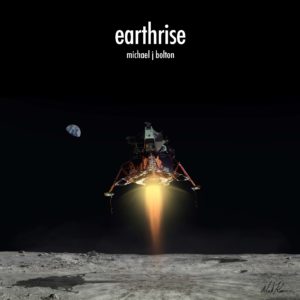 Not to be confused with the Transatlantic crooner that once sported two haircuts simultaneously, Michael J. Bolton is a UK based bassist, composer and arranger whose 2019 album ‘Earthrise’ is a brilliant instrumental work inspired by the 50th anniversary of the Apollo 11 moon landings. Being a master of the bass, naturally, his instrument is often at the fore, but for lovers of busy jazz keys, complex guitar and even occasional ambient tendencies, this record is one with a huge amount to give.

Created over a long period, the album takes in a lot of different moods but still manages to feel like a coherent work; one with a definite beginning, middle and end. ‘The Launch’ begins the musical journey with something more akin to film soundtrack work than jazz. It has a slightly pompous quality thanks to a militaristic drum part – presumably to highlight the huge importance of the voyage the astronauts are about to undertake – but beneath that, you’ll find swirling keys and soaring guitars that draw a big influence from classic, early 80s progressive rock. After establishing a melody, the drums begin to clatter, the guitars rise and finally an ambient drone signifies the vastness of space. Within these five minutes, Bolton shows off a few talents, though nothing that’s particularly close to what follows. ‘Trans Lunar Injection’ might sound like it should be an ambient piece, but Bolton and his band take a hard left turn into jazz fusion, where a combination of soprano saxes and squirly keys take cues from 80s works by Stanley Clarke and George Duke. The shinier sound makes it sound quite dated at first – it certainly doesn’t sound like something released in 2019 – but stick with it… From shaky beginnings, you’ll eventually find yourself immersed in a number that really delivers in terms of melody – and especially so once Bolton drops into a funk groove worthy of Marcus Miller and guitarist Mike Walker drops in a flawless solo. Tailing off with more funk bass and prominent soprano sax work (courtesy of Marc Russo and Tim Garland), this squeezes a hell of a lot out of just six minutes.

In a far more reflective mood, ‘Arrow of Time’ presents a very soft, late night piano sound before settling into a main melody best described as “coffee time jazz”. While some other more soulful players have been an influence and the soft mood occasionally becomes reminiscent of some of Lee Ritenour’s works, it has a very mellow mood, but never quite falls into muzak. At almost ten minutes long, you might find yourself a little adrift if your tastes in fusion lean towards something busier, but there’s fine playing throughout, particularly from Bolton himself. His fluid fretless work often adds a welcome texture, enough to sustain the bulk of the piece, but subsequent listens uncover new joys. A particular highlight comes from Matthew Johns, dropping in with a killer piano solo. In keeping with floaty, space themes, the self explanatory ‘Deep Space’ fills time with blankets of synths and its ambient textures surely take influences from Brian Eno’s masterpiece ‘Apollo: Atmospheres & Soundtracks’ before the title track works the band very hard once more. Here, there’s more of a swing towards Jeff Beck’s take on jazz fusion (circa ‘Blow By Blow’), thanks to a more prominent guitar. The blues inflected guitar leads work exceptionally well against a swing influenced drum part and bell-like keys. There’s an utterly shameless 70s feel to the whole thing and that’ll more than sway fans of Stanley Clarke and Weather Report, although Bolton’s take on the sound isn’t just recycled. The addition of ethereal vocals and Don Cherry-ish trumpet lines give the whole number a texture that feels deeper on each listen, very much making it a stand out.

Another easy stand out, ‘The Eagle’ is a heady mixture of 70s fusion and 90s acid jazz that pushes a heavy groove throughout. The drums lock into a busy style from the off – Alex Smith is a hell of a player – and here, more than on some tracks, Bolton seems keener to be in the spotlight as opposed to just anchoring his fabulous ensemble. The guitars and keyboards always manage to tread a fine line between melodic and just plain busy, while the legendary David Hentschell’s production really brings out the best in the overall sound. In terms of fusion, it has an instant familiarity, but it’s one of those cases where familiarity certainly trumps all-round inventiveness. As with a couple of the other numbers, repeated listens brings genuine rewards. Closing this lengthy journey, ‘The Return’ has a very soft and reflective mood, beginning with Harold Budd inspired ambient piano sounds, before branching off into warmer piano based balladry which at times owes more to an early 80s Genesis/Phil Collins ballad than any obvious jazz roots. Bolton’s piano work is rich and has a relative simplicity that makes the melody all the more appealing. With that established, the number then takes a massive detour into jazz fusion and the remaining six minutes blend a very Wynton Marsalis trumpet style with a blanket of keys that wouldn’t ever feel out of place on a late 70s Weather Report album, or even found lurking on a deep album cut from Earth, Wind & Fire. Each of the band gets time in the spotlight during this final piece and Walker contributes some busy, clean guitar work before things branch off into a heavily syncopated closing section where the soprano sax dances over deep funk. It’s all set off kilter by some absolutely killer drumming, but if you’re of a jazz fusion mind, it finishes the record with one of it’s finest grooves.

Taking in various adult contemporary styles across its extended playing time and having been written during different periods, ‘Earthrise’ could have ended up sounding like a hotchpotch compilation of material, but it has a smoothness and focus that actually makes it a surprisingly coherent listen. For jazz fusionists that still dig out various 70s classics from Return To Forever and Herbie Hancock, to those who’ve found time to enjoy the textures of Michael Manring and Marcus Miller, through to the more adventurous prog fan dabbling in jazz noises, this is a must hear.